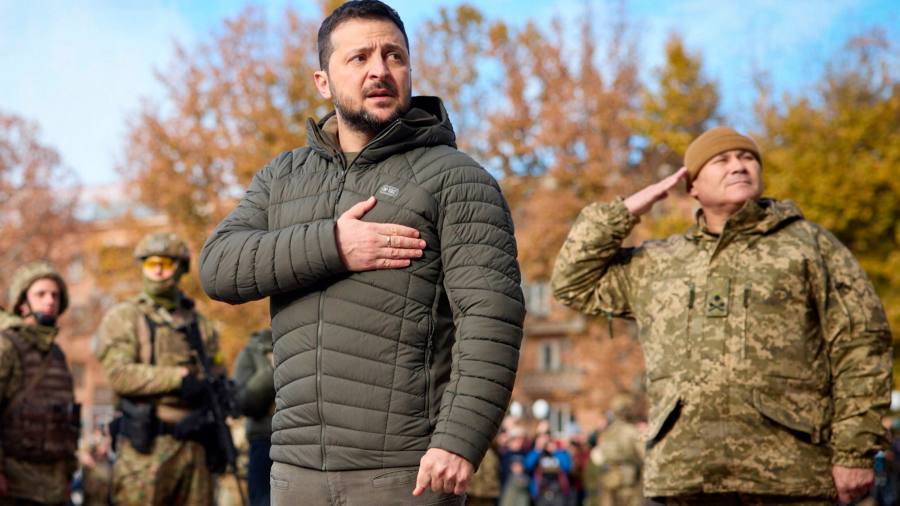 Volodymyr Zelenskyy said Russia’s strategy to plunge Ukraine into darkness by destroying its infrastructure would not weaken the country’s resolve to liberate all occupied land, describing the conflict as a “war of strength and resilience”.

Moscow has stepped up a bombing campaign against critical infrastructure since last month in an attempt to force Kyiv to make concessions. On Wednesday, Russia launched 70 missiles against infrastructure targets, leaving about 80 per cent of the country in the dark and without water. All 15 of Ukraine’s nuclear reactors were taken offline because electricity became unstable.

Ukraine’s president insisted there would be no lasting resolution to the war unless Russian troops withdrew from all occupied territories.

“We must return all lands . . . If you can’t get your land back entirely, the war is simply frozen. It’s a question of time before it resumes” — Volodymyr Zelenskyy told the Financial Times

Kyiv has been pushing back at perceived pressure to show its openness to a negotiated solution to the war. Some western allies fear that any attempt by Ukraine to take back Crimea, annexed by Russia in 2014, could lead to an escalation by Moscow and even the use of nuclear weapons.

Ukraine’s military aims have hardened as its forces have made advances against Russian troops in the south and east: it is seeking the return of territory occupied since February and land occupied in 2014.

Did you keep up with the news this week? Take our quiz to find out.

1. US employers slow hiring before holiday rush US businesses, including Macy’s and Walmart, are hiring fewer seasonal workers this holiday shopping season, as stubborn inflation dims the outlook for retail sales.

2. European businesses urge China to open up As Beijing and Guangzhou teeter on the edge of citywide lockdowns with Covid infections at record levels, European business leaders and diplomats in China have urged Xi Jinping’s administration to change course from its contentious zero-Covid policy and begin to reopen its economy.

3. JPMorgan Chase and Deutsche Bank sued by Epstein victims In the lawsuits, filed in New York on Thursday, victims of deceased sex offender Jeffrey Epstein accuse the lenders of aiding sex trafficking by turning a blind eye to suspicious withdrawals and payments from Epstein’s accounts.

4. EU demands rapid response to Biden’s $369bn green subsidy package Brussels and Washington have set up a task force to address the impact of the Inflation Reduction Act and its “buy American” provisions, but European capitals are growing impatient with the lack of progress.

Black Friday One of the biggest days in the retail calendar kicks off, with analysts watching for signs of cutbacks in consumer spending.

World Cup Iran face Wales before Qatar play Senegal, followed by the Netherlands versus Ecuador and England against the US.

How #electiontwitter took over the political prediction game Polling firms and established election pundits faced criticism after underestimating Republican support in the 2016 and 2020 elections. Now, a clutch of amateur polling enthusiasts have gained traction online after successfully calling the US midterms.

Bahamas reels from FTX collapse Just seven months after moving to the Caribbean country, Sam Bankman-Fried’s cryptocurrency exchange collapsed, shattering the credibility of the Bahamas as a jurisdiction that properly monitors digital asset businesses. And those in power have sought to distance themselves from the fallout.

How private equity securitised itself There’s a financial security loved by the PE industry: CFOs, or “collateralised fund obligations”. They are a variant of the “collateralised debt obligations” that wreaked havoc during the 2008 financial crisis and involve bundling stakes in hundreds of buyout groups’ companies into investments with strong credit ratings.

Are we ready for the loneliness epidemic? Throughout human history, being alone meant mortal danger and was to be avoided at all costs. It is in recent decades that our risky experiment with loneliness has become almost mainstream. Now, wealthier societies are becoming troubled by the affliction — and the young are suffering most, writes Federica Cocco.

Blockchain may have a green future despite crypto Scandals such as FTX will leave many traditional financiers shying away from digital assets, writes Gillian Tett, but the crypto collapse should not detract from experiments with blockchain and tokenisation to solve real-world problems, such as helping investors track potential greenwashing.