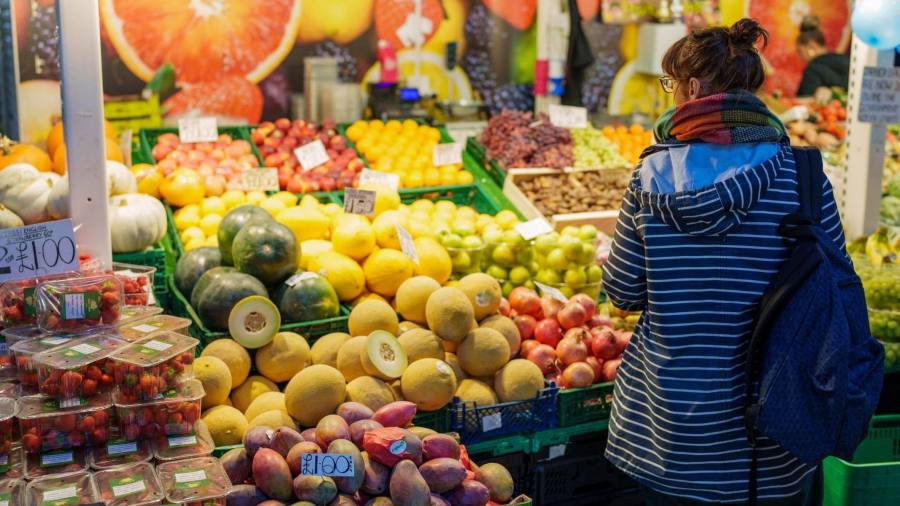 
UK grocery prices rose at their fastest pace in 14 years in October, pointing to a further increase in the overall inflation rate this month when fresh data is released, according to a survey.

Poorer households will be hit hardest by steep rises in the cost of food and other supermarket goods. Economists said that it was too early to call a “price ceiling”, the maximum level food prices will reach before they start to fall again.

Walid Koudmani, chief market analyst at online investment platform XTB online trading, said: “[Food price inflation] when compounded with the massive energy spending increases has been seen by many as a significant risk to the economic stability of the UK.”

“It is likely that food inflation will continue to increase as macroeconomic indicators have shown little sign of a slowing down in price growth while consumers continue to struggle with the ongoing cost of living crisis,” added Koudmani.

UK energy prices have soared in recent months partly because of huge cuts in gas imports from Russia, pushing up energy bills for households and businesses.

UK inflation hit a 40-year high of 10.1 per cent in September with economists expecting the figure to rise further before the end of the year. The Office for National Statistics will release its October inflation data on Wednesday next week.

A surge in the cost of groceries will affect less well-off households hardest, with families in the bottom 10 per cent spending nearly a fifth of their weekly income on food, a larger proportion than those with greater means, according to separate data by the ONS.

“The rocketing price of food is a real concern with millions of people skipping meals or struggling to put healthy meals on the table,” said Sue Davies, head of food policy at Which? consumer group.

Shoppers have been shunning branded products in an effort to save, with sales of supermarkets’ own labels increasing 10.3 per cent in the past four weeks, while purchases of cheaper ranges jumped 42 per cent, Kantar said.

More than a quarter of households reported they were struggling financially, according to Fraser McKevitt, head of retail and consumer insight at Kantar. “Food and drink spending is generally non-discretionary,” he explained, so “many are looking to reduce costs in other ways”.

Demand for cheaper retailers grew, with Aldi and Lidl each boosting their sales more than 20 per cent year-on-year. Together the two discount supermarkets now make up 16.4 per cent of the UK grocery market, compared with the 4.4 per cent share they held during the 2008 financial crisis.

Kantar’s report suggested that inflation would continue to rise in the months to come, driven by increases in the cost of food, which makes up 10.5 per cent of the overall measure of consumer price growth.

FTX Exchange To Be Acquired By Binance – Bitcoin Magazine