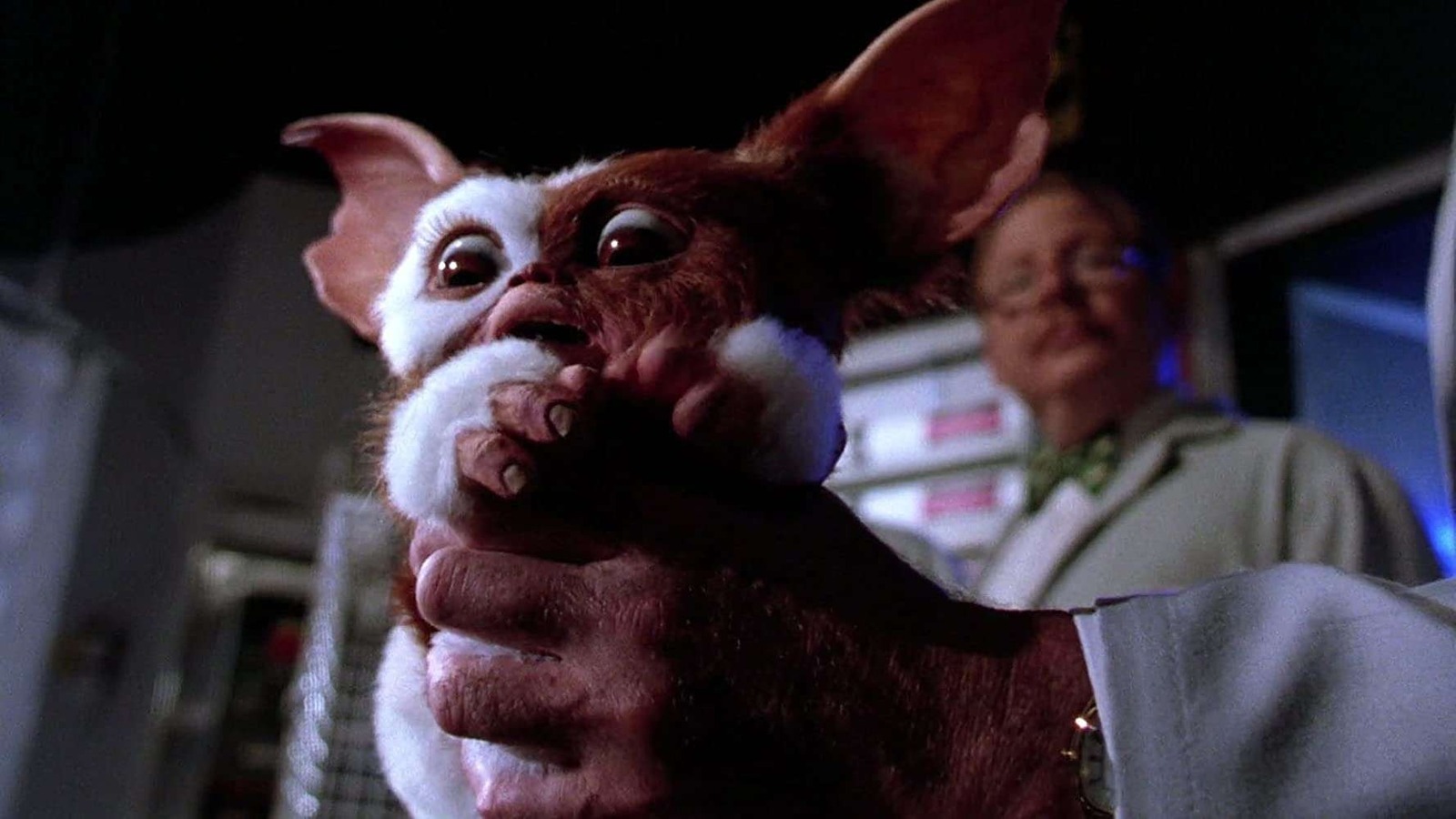 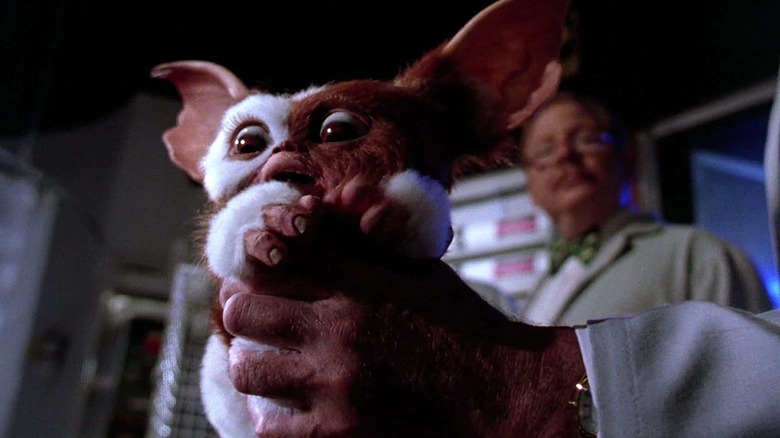 Some young people (heck, even some old people) look at various tweets, articles, and posts from cinephiles and film historians like myself advocating for proper film preservation and scoff, thinking that, in this brave new world of instant access streaming services and online downloads, the entire history of cinema is at our fingertips and so we shouldn’t be complaining.

Of course, this attitude is not only grossly misinformed given modern cinema’s unsustainable status quo, but potentially dangerous, at least when it comes to keeping the history of what is still the most preeminent artistic medium of our lifetime alive. If historians are particularly passionate about the issue, it’s in part because we’re aware of similar threats that menaced film preservation in the past.

One of those threats emerged in the mid-’80s, when media mogul Ted Turner made the rather glib decision to “colorize” classic black-and-white films for television broadcast (and, later, home media). The pushback from filmmakers, critics, and similarly level-headed people toward this decision made it all the way to Congress and led to the passing of the National Film Preservation Act of 1988, which in turn established the National Film Registry.

One of the big opponents of Turner’s colorization idea was director Joe Dante, who was mentioned prominently in this piece from 1986 as being against the “color tampering” of films. Dante used the controversy to make a really clever joke in what is arguably his most subversive film, 1990’s “Gremlins 2: The New Batch.” Since that joke was ultimately deleted, here’s why it deserves to be rediscovered.

The Menace Of Ted Turner’s ‘Crayons’ 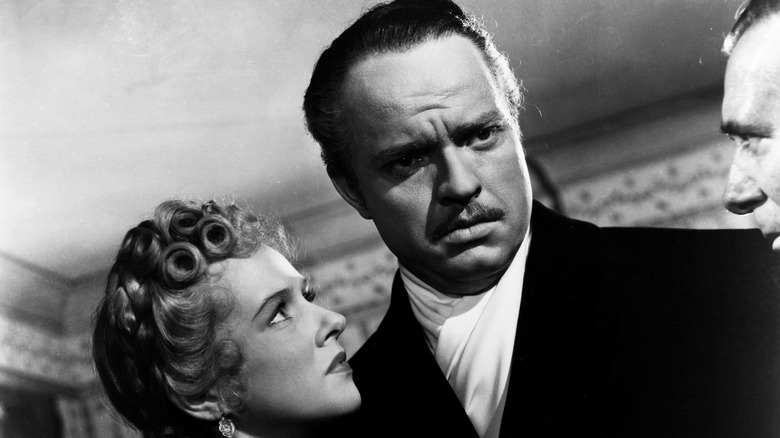 The 1980s saw a major sea change in cinema from all sorts of angles. In particular, the rise of the home video market coincided with the prevalence of cable television, meaning that films both classic and recent were able to be viewed uninterrupted in their entirety from the comfort of one’s own home for the very first time.

Due to this new situation, audiences became subject to corporations and rights holders playing fast and loose with the ways these films were presented. Films seen on physical media and TV broadcasts were subject to the awful “pan-and-scan” method of fitting a widescreen movie onto then-standard square television sets, and in the case of television, versions could be further edited in a variety of odd ways.

Turner’s dismissive attitude toward films and their exhibition undoubtedly helped turn public opinion, and ultimately the government against him, especially after making such childish comments as “I’m colorizing ‘Casablanca’ just for controversy’s sake.” That wasn’t the only immature thing about his campaign — the actual colorization process Turner used made the films look bizarrely washed out and smeared, an aesthetic not unlike a kids’ coloring book. As Orson Welles allegedly said to his friend Henry Jaglom about the prospect of Turner colorizing “Citizen Kane,” the filmmaker asked to not “let Ted Turner deface my movie with his crayons.”

Daniel Clamp Has A Wonderful Life 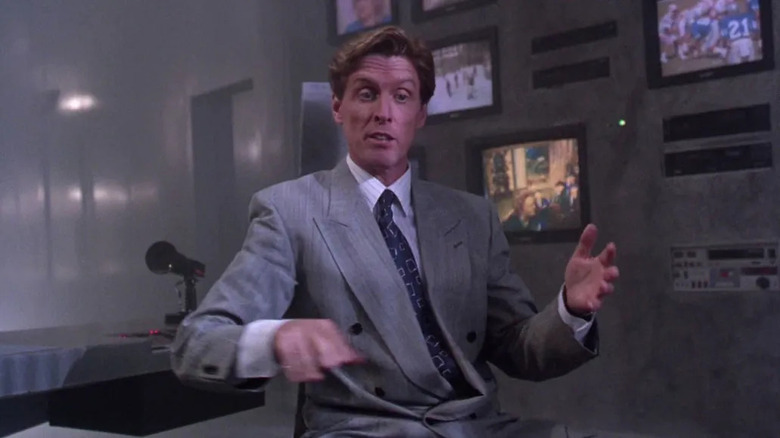 While the Ted Turner colorization controversy was mostly resolved by the time “Gremlins 2” went into production, Joe Dante couldn’t resist including a little clapback reference to the issue. Especially since the character of Daniel Clamp (John Glover) is a pointed amalgamation of Turner, Donald Trump, and other reckless and irresponsible millionaire moguls.

In the scene, Clamp is distracted from his busy day of goofing around in his cold, impersonal office by seeing one of many TV monitors displaying a broadcast of the 1946 Frank Capra classic “It’s A Wonderful Life.” The film is playing in its proper black-and-white transfer, which makes Clamp upset until he presses a button next to the monitor, and presto, the movie is now being shown in Ted Turner-style murky color, making Clamp smile brightly.

Had Dante left the scene in the movie, it would’ve been a clever, public ridiculing of Turner’s ill-fated campaign. As with most Dante gags, it’s multi-functional and multi-layered: beyond the scene’s reference to the real-life Turner, the use of “It’s A Wonderful Life” calls back to the first “Gremlins” in a scene where Mrs. Peltzer (Frances Lee McCain) is watching the film while chopping onions. The sly connection there was between the 1946 film’s villain, Mr. Potter (Lionel Barrymore), and the human villain of “Gremlins,” the similarly miserly Mrs. Deagle (Polly Holliday). Ironically, Mrs. Deagle’s plot to extort the small town of Kingston Falls (the name a direct reference to Bedford Falls from “It’s A Wonderful Life”) was largely deleted from “Gremlins,” just as the Clamp clip was excised from “Gremlins 2.”

The scene also would’ve further supported a theme still very much present in the final cut of “Gremlins 2,” that of Clamp’s company’s callous manufacturing practices. In the climax of the movie, Clamp declares that the drawing Billy (Zach Galligan) made of Kingston Falls will now become a development entitled “Clamp Corners.”

Dante Looks At The Big Picture 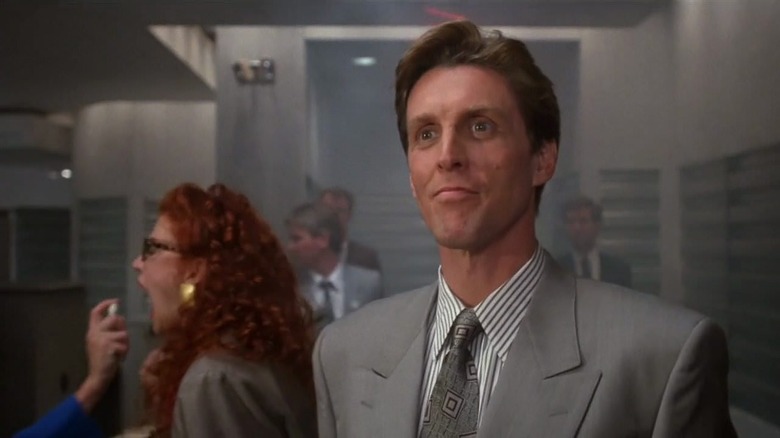 There were a number of reasons Dante dropped the colorization joke from “Gremlins 2.” For one, the controversy had reached a somewhat happy ending by the time “Gremlins 2” was being made in 1989, as the public realized the colorized classics were ugly and the National Film Registry had begun the work of preserving select movies.

For another, even though the character was intended as a send-up of odious celebrity CEOs, Glover’s performance gave Clamp enough likability that he became a fairly lovable figure in the film, meaning the satire of the colorization joke would lose some of its bite.

Officially, however, Dante described in his commentary for the scene that he saw Christopher Guest’s 1989 film “The Big Picture” while editing “Gremlins 2,” which contains a joke about colorization that he felt was so similar it would make his scene redundant.

While efforts from the likes of the National Film Registry, filmmakers like Martin Scorsese, and other organizations keep the drum beating for film preservation, it serves us well to remember to make fun of the Ted Turners and Daniel Clamps of the world, pointing out how their terrible tastes are harmful. Oh yeah, and terrible.

Read this next: Every Martin Scorsese Feature Ranked From Worst To Best

The post How a Gremlins 2 Deleted Scene Directly Tackles One of Cinema’s Great Controversies appeared first on /Film.

In the subscription era, paying for apps has gotten really confusing