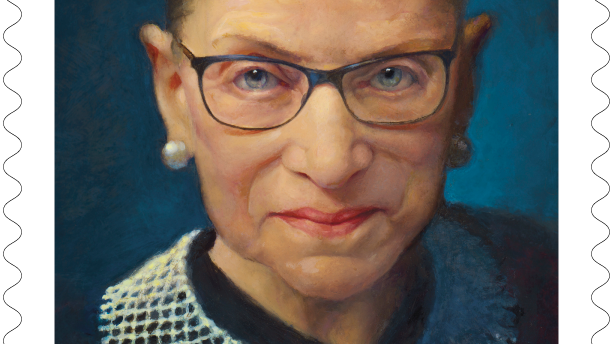 Late Supreme Court Justice Ruth Bader Ginsburg is being honored with a new Forever stamp from the U.S. Postal Service, showing her wearing a white collar with her black judicial robe.

Late Supreme Court Justice Ruth Bader Ginsburg is being honored with a new Forever stamp from the U.S. Postal Service, showing her wearing a white collar with her black judicial robe.

Ruth Bader Ginsburg put her stamp on U.S. law — and now the U.S. is putting the late Supreme Court justice on a stamp.

The U.S. Postal Service recently unveiled a new Forever stamp featuring Ginsburg, citing her status as “a passionate proponent of equal justice and an icon of American culture.”

Ginsburg’s “dissent collar” — a darkly formal and hard-edged version signaling her opposition on a key issue — became famous as the high court split over divisive issues, but the simpler white collar the stamp depicts was the justice’s favorite.

As it announced the new stamp, the Postal Service noted Ginsburg’s legacy of fighting for equal rights, including her “important majority opinions advancing equality and strong dissents on socially controversial rulings.”

The Ginsburg stamp will be released in 2023 — 30 years after she was nominated to the Supreme Court by former President Bill Clinton. It features art by Michael J. Deas, a frequent stamp artist, and is based on a photograph by Philip Bermingham, according to the Postal Service.

Ginsburg will be the first Supreme Court justice to get a solo stamp issue since 2003, when Thurgood Marshall was honored. U.S. stamps have featured a number of other justices over the years, including William Brennan Jr. and Louis Brandies — part of a four-justice issue in 2009 — and Hugo Black and Oliver Wendall Holmes.

Other new Postal Service stamps for 2023 will honor author Toni Morrison, who died in 2019, and Chief Standing Bear, who secured a key legal victory in American Indians’ fight for civil rights in the U.S.