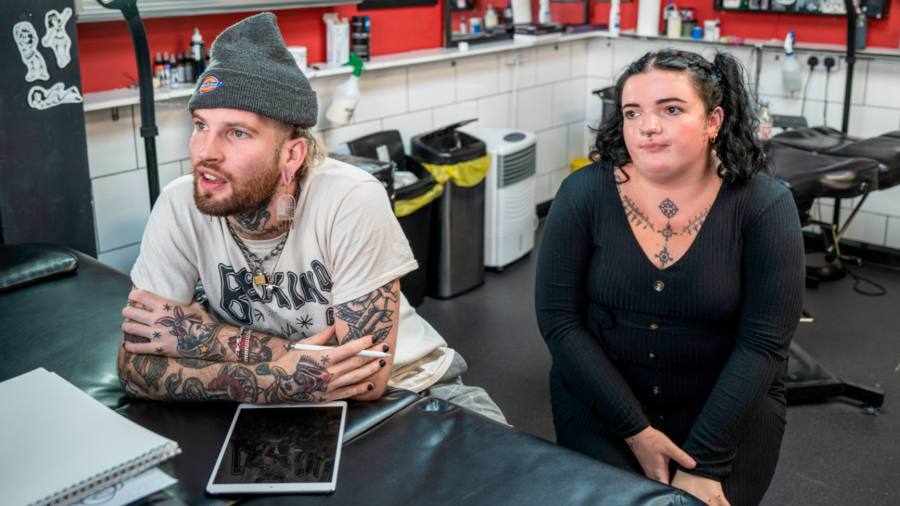 
For British households absorbing one of the biggest squeezes on incomes since the second world war, the pain of the current cost of living crisis comes in many guises.

“It definitely means less people are getting tattoos,” said self-employed body artist Lewis Corps with a roll of his eyes as he sat waiting for customers at the Nine Lives tattoo parlour in the town of Hove on England’s south coast.

For Cassandra Metcalfe, a 38-year-old restaurant manager in Hove whose electricity bill jumped from £25 to £110 a month, it has meant changing her personal living arrangements. “I’ve had to get someone to share my flat,” she said, after her landlord put up her rent.

Such adjustments to life are small compared with the privations of those at the bottom end of the income spectrum, but as the political soap opera continues in Westminster following the downfall of Liz Truss after just six weeks in office, they are starting to bite.

Peter Kyle, the Labour MP for Hove, whose constituency includes well-to-do middle class neighbourhoods as well as a ward that is among the poorest 10 per cent in England, is seeing the change at his weekly surgeries for constituents.

Inquiries about energy bills have risen by nearly a half, and debt-management issues up by a third over the past three months. “Before people were juggling bills, now many are in a place where they are working out which one they don’t pay first,” he said.

In the cafés, hair salons and nail bars along Hove’s George Street pedestrianised shopping area, commentary about turmoil in Westminster this past week is expletive laden.

“It’s a complete and utter shitshow, let’s be honest,” said Elliot Waring, 28, sitting outside having coffee with his sister Lilie, whose electricity bill increased in October from £31 to £111 a month, “And now they’re talking about bringing Boris [Johnson] back when he’s only just been thrown out because he was incapable of running the country. Seriously?”

Austerity never went away, it just changed its name

Even those who profess not to follow the news closely appear to have heard of the former prime minister’s possible return to Downing Street.

“It’s disgraceful, the Tories have reached the stage where it’s just about their internal struggles, not about helping people who are really struggling to pay their bills and mortgages,” says Fiona Kent, a 62-year-old part-time teacher and Labour party member, who said she now sometimes took coffees to the park or the beach rather than meeting friends in cafés.

Not everyone was aghast at the prospect of a Johnson resurrection. One 78-year-old conservative voter who was worried that the government might remove the “triple lock” protecting the value of her pension, said Boris could be a “buffoon”, but added that “as a leader, he has standing around the world”.

Still, even those with reasonably well-paid jobs and mortgages still safely tucked under fixed-rate deals said they were conscious of the gathering storm clouds, particularly when the government’s energy price cap expires in April.

“You can see the weight on people’s shoulders and in their faces,” said Heidi, sitting having a smoke outside Georgie’s café. “And everyone knows it’s going to get worse.”

Torsten Bell of the Resolution Foundation, a think-tank that focuses on cost of living issues, concurred and noted that households that have already seen prices rising far faster than their wages had more pain to come.

With average energy bills on course to reach £4,000 next April, Bell warned that it would not be just low-income households that struggle to pay their bills. As interest rates rise to tame inflation, 5mn households will face higher mortgage payments by the end of 2024.

“The depth of the cost of living crisis is very much ahead of us,” he said. “Family incomes are set for falls next year on a scale we only normally see in deep recessions.”

For those at the bottom end of the income distribution who are receiving social security benefits like universal credit, which may now not even increase by the rate of inflation, the pain point was passed some time ago, according to frontline community workers.

Wayne Dobson, chief executive of the Cedarwood community centre in North Shields, one of the poorest areas of England’s north-east, said that over half of the people using his centre’s food bank were in work.

“There’s a queue of 40 people every day. To be honest, Westminster might as well be on the moon for all anyone cares. Austerity never went away, it just changed its name to ‘cost of living’ or ‘Covid’,” he said, referring to the decade of public spending cuts imposed by Conservative-led governments after 2010.

With Jeremy Hunt, the chancellor, demanding Whitehall departments find billions more in savings in order to balance the books ahead of the fiscal statement planned for October 31, those helping the poorest say they are genuinely scared about the winter.

Lisa Cover, development manager at Northwood Together, a community project serving one of the lowest-income suburbs of Kirkby, a satellite town of Liverpool, said the group had even given up charging 20p for a cup of tea at their drop-in centre because it was deterring people from coming in to get warm.

Recalling a visit this week to a family with eight children who had no electricity and no nappies, Cover said that even simple changes, such as the government’s insistence on paying universal credit payments monthly rather than fortnightly, were tipping families over the edge.

“I really, really do fear for people this winter,” she said. “There is all this madness going on, with Liz Truss and her madcap ideas, then she walks away after a few weeks in power because she found it too hard. It’s a disgrace. An utter farce. And that’s the way people see it.”

Is Volatility In The Bitcoin Price Coming – Bitcoin Magazine