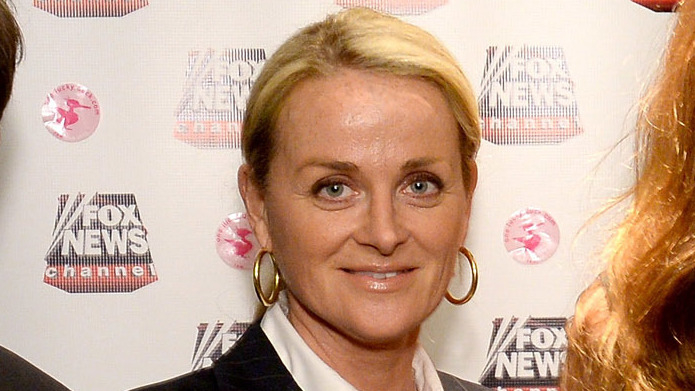 Fox News Media CEO Suzanne Scott, shown at a 2014 event in New York City, warned colleagues not to “give the crazies an inch” after pressure rose from supporters of then President Trump. Lawyers for Dominion Voting Systems indicate they to use Scott’s words against Fox in its $1.6 billion defamation suit against the network.

Fox News Media CEO Suzanne Scott, shown at a 2014 event in New York City, warned colleagues not to “give the crazies an inch” after pressure rose from supporters of then President Trump. Lawyers for Dominion Voting Systems indicate they to use Scott’s words against Fox in its $1.6 billion defamation suit against the network.

Besieged by angry viewers, denounced by then-President Trump, questioned by some of its own stars, Fox News found itself in a near-impossible spot on Election Night 2020 after its election analysis team announced before any other network that Joe Biden would win the pivotal swing state of Arizona.

Fox News CEO Suzanne Scott proved so flummoxed by what ensued that she warned colleagues, “We can’t give the crazies an inch.” That’s according to the account of a lawyer for Dominion Voting Systems, which is seeking $1.6 billion from Fox in a defamation suit over false allegations on the network that the company committed election fraud. A trial date is set for April in Delaware.

The voting machine and technology company’s attorney, Justin Nelson, revealed Scott’s remarks in a court proceeding on Tuesday in which he argued that Dominion’s legal team is entitled to receive the employment contracts of 13 Fox News executives, including Scott. She has served as CEO since 2018. (Dominion is also suing Fox Corp, the network’s parent company.)

In a ruling yesterday, Delaware Superior Court Judge Eric M. Davis affirmed that Dominion should receive the contracts – the point of contention in Tuesday’s hearing.

For days after the election, Trump and his top aides demanded the network rescind its announcement of Biden’s victory in Arizona, even pressuring the network’s controlling owners, Rupert and Lachlan Murdoch. In the weeks that followed, a cadre of Fox News stars hosted Trump’s advisers – and even Trump himself – to peddle baseless conspiracy theories of election fraud. Many of those false claims asserted without evidence that Dominion’s technology and machines had been used to rig the vote and to cheat Trump of the White House.

According to Nelson’s remarks at the hearing, senior Fox News executives interceded to try to block Fox Business stars Lou Dobbs and Maria Bartiromo from having Trump’s campaign attorneys, Sidney Powell and Rudy Giuliani, on their shows to repeat such lies. In late 2020, Dobbs and Bartiromo hosted Trump’s advocates to make those accusations.

In December 2020, Fox Business host Lou Dobbs suggested to viewers that Republicans who voted to certify President-elect Joe Biden’s win were “criminal.” Off the air, according to an attorney for Dominion, Fox News executives sought to block Dobbs and Maria Bartiromo from inviting two of then President Donald Trump’s attorneys on their shows.

In December 2020, Fox Business host Lou Dobbs suggested to viewers that Republicans who voted to certify President-elect Joe Biden’s win were “criminal.” Off the air, according to an attorney for Dominion, Fox News executives sought to block Dobbs and Maria Bartiromo from inviting two of then President Donald Trump’s attorneys on their shows.

Fox’s attorney, Justin Keller, did not dispute the remarks attributed by Nelson to Fox News CEO Scott. Nor did he deny that executives sought to intervene in the two programs’ efforts to book Powell and Giuliani even though their claims had been discredited. Instead, Fox’s attorney made a broader argument against allowing scrutiny of the executives’ contracts, saying they were unnecessary given how many documents the network has already turned over to Dominion.

Fox News and its chief trial attorney, Dan Webb, declined to comment for this article, as did Dominion’s lawyers. However, the arguments that played out during a hearing Tuesday reflected a looking-glass world. Dominion depicted the network’s executives scrambling to rein in the chaos engendered by its stars, while Fox’s attorneys were effectively arguing the executives had little time, ability or inclination to do so.

In his exchanges with the judge, Keller drew a line distinguishing between a host or producer “who are sometimes pre-scripting material for the show, that is going to be tethered to a specific channel’s telecast” and a network executive.

“That person is going to be far removed from the day-to-day operations of editorial control and discretion over the particular channel’s telecast,” he said. Beyond Scott, the executives whose contracts are being sought also include Jay Wallace, Fox News’ president and executive editor and Meade Cooper, the executive vice president of primetime programming, among others.

Nelson, the Dominion attorney, retorted by citing a document obtained from Fox that “talks about the daily editorial meeting that occurs, including almost all of these executives that we’re looking at right now.”

Dominion appears to be drilling down on its argument – hotly disputed by Fox – that the network’s executives knowingly allowed such false conspiracies to air on its programs to boost their audiences – because their pro-Trump viewers abandoned them after the Arizona call.

Under U.S. Supreme Court rulings, Dominion has to prove Fox demonstrated “actual malice” to win a defamation case. That means either knowingly broadcasting false and damaging information, or doing so with reckless disregard for the truth.

“Fox sought to profit off a lie. That’s the allegation,” Judge Davis summarized. “Whether that’s true or not, we’ll stay for the trial.”

Dominion appears to be drilling down on its argument – hotly disputed by Fox – that the network’s executives knowingly allowed such false conspiracies to air on its programs to boost their audiences – because their pro-Trump viewers abandoned them after the Arizona call.

A new book reveals how Fox journalists acted behind scenes

In their new book on Trump, The Divider, journalists Peter Baker and Susan Glasser reveal that anchor Bret Baier cited intense pressure from Trump’s team to explore whether and under what circumstances the Arizona call could be reversed. Fox did not withdraw its projection. The authors also reported that Wallace, the head of news, overruled his election unit and instructed his anchors to not announce that Biden had won Nevada, too.

What ensued involved a split screen. Fox became the last network to project Biden’s win of the presidency despite being the first to make the Arizona call that proved accurate. And while its reporters often unraveled election fraud allegations, many of Fox’s biggest stars tolerated, amplified and even embraced them, Dominion’s lawyers noted.

No one at Fox would directly comment on Baker and Glasser’s assertions, other than Baier, who released a statement taking some issue with how his objections were framed. One person inside Fox with direct knowledge of its election coverage told NPR the delay in calling the full White House win for Biden involved a technical glitch in a control room as one show transitioned to the next at the top of the hour.

In hosting Fox’s first post-election interview with Trump that November, Bartiromo echoed Trump’s disproven allegations of electoral fraud, saying, “This is disgusting, and we cannot allow America’s election to be corrupted.” She told viewers in mid-December that “an intel source” told her that Trump had won the election. Bartiromo, officially designated as a news anchor, never returned to explain on what grounds the source made that statement. (Fox no longer publicly characterizes her as an anchor, which had rooted her in the news side of Fox, as opposed to an opinion host.)

In December 2020, Dobbs contended on the air that Trump’s opponents within the government had committed “treason,” and later suggested any action by a Republican officeholder to uphold Biden’s victory might have been “criminal.” His departure from the network was hastily announced the day after another election software company, Smartmatic, filed its own $2.7 billion lawsuit against Fox for defamation surrounding similarly false accusations of fraud. That case is not as far along in the process.

Fox has dismissed both suits as efforts to stifle legitimate coverage of inherently newsworthy allegations – election fraud – made by inherently newsworthy people – including the then-sitting U.S. president and his top campaign advisers. Fox never did back down from its projection of Arizona for Biden, its original sin in the eyes of Trump and his campaign. As viewers abandoned the network for harder-edged fare on Newsmax, OAN and elsewhere, some Fox stars served up incendiary rhetoric and challenged the legitimacy of Biden’s pending certification in early January.

In recent weeks, Dominion has argued that Fox host Jeanine Pirro – a former district attorney and New York state judge as well as a Trump confidant – sits at the heart of its case. NPR previously revealed the existence of an anguished email from a Fox News producer begging colleagues to keep Pirro off the air because she was circulating lies about election fraud from dark corners of the Internet.

Dominion’s legal team asked the court to compel additional testimony from Pirro late last month, arguing that after Fox invoked a reporter’s privilege to shield her from some questions during her deposition. A ruling on whether Pirro must return for questioning has not been made public.

As with the Scott admonition about “the crazies,” Dominion’s legal team is seeking to use those exchanges to show that Fox knowingly allowed Dobbs, Pirro, Bartiromo and their guests to peddle false claims that defamed the company and set the country on edge ahead of the Jan. 6, 2021 siege of the U.S. Capitol.

According to filings reviewed by NPR, Dominion is also asking the court to compel additional testimony from Fox star Sean Hannity, a close adviser to Trump. Dominion’s attorneys are seeking to bar “improper assertions of reporter’s privilege,” arguing that Fox inappropriately asserted reporter’s privilege for Hannity during earlier questioning as well, though the full filing is sealed. He was deposed in late August, according to court records.

Fox News has repeatedly defended its conduct by invoking the importance of American free speech principles bound up in the First Amendment, saying the Smartmatic and Dominion cases are attempts to chill independent reporting and commentary.

Fox Corp CEO and Executive Chairman Lachlan Murdoch has taken a seemingly conflicting stance halfway across the globe in Australia, where the media magnate and his family now live. A political columnist for the magazine Crikey accused the Murdochs of being “unindicted co-conspirators” in the insurrection at the U.S. Congress by Trump supporters because of the false fraud allegations and the hyper-charged rhetoric ahead of the planned rally.

In that case, Murdoch is accusing a much smaller media outlet of defamation. He has forced the site to pay out for highly critical commentary several times previously; Crikey says it intends to use the suit as a test case for recent changes in libel law in that country. Media outlets have less legal cover in Australia than they do here in the U.S.

Maddy Lauria contributed to this report.