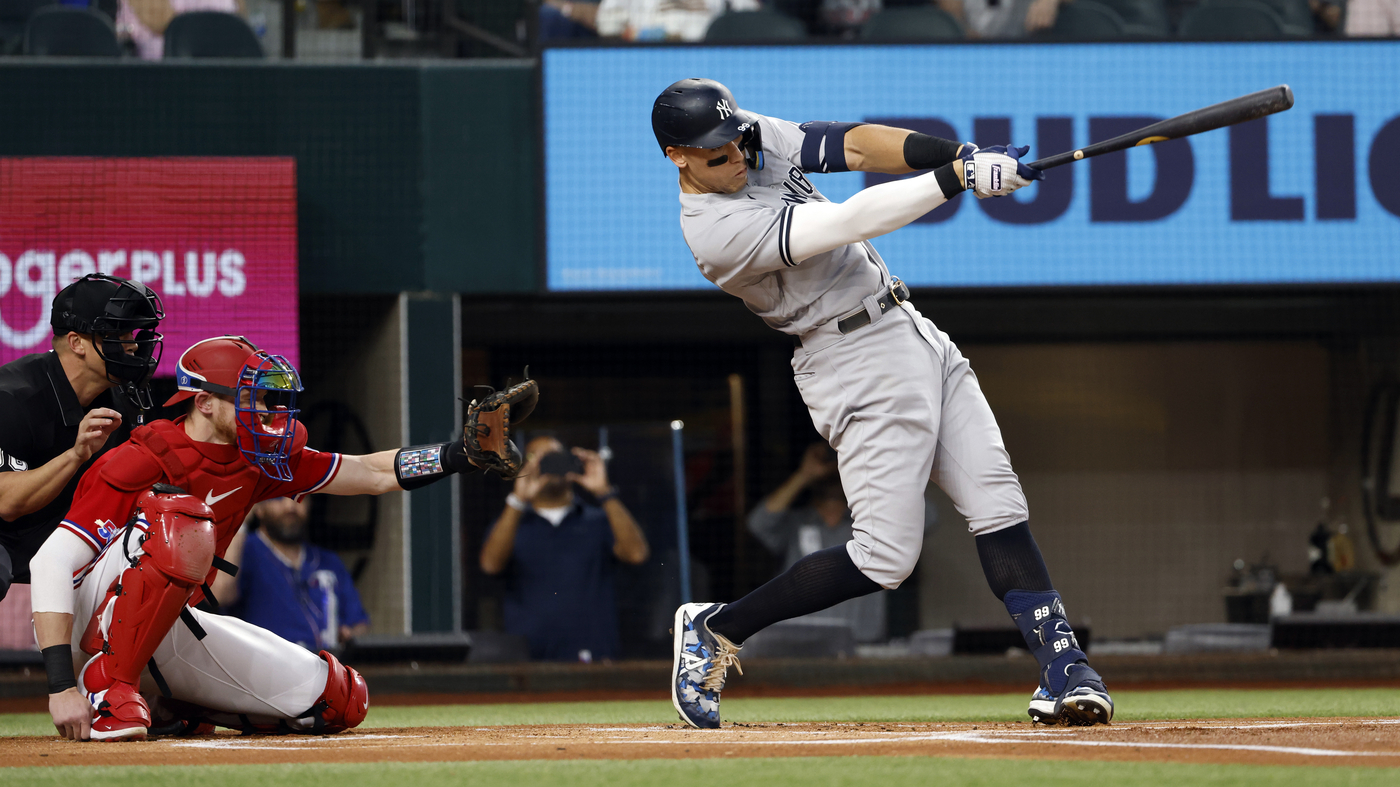 Aaron Judge #99 of the New York Yankees hits his 62nd home run of the season against the Texas Rangers during the first inning in game two of a double header at Globe Life Field on Tuesday in Arlington, Texas.

Aaron Judge #99 of the New York Yankees hits his 62nd home run of the season against the Texas Rangers during the first inning in game two of a double header at Globe Life Field on Tuesday in Arlington, Texas.

For 61 years, Roger Maris’ home run record had stood: 61 home runs, set by the New York Yankee in 1961, untouched as the most homers hit in one season by any American League player.

Now, all these years later, with a 62nd decisive shot off of Aaron Judge’s bat, a new record has taken its place.

Judge, the 30-year-old standout outfielder for the New York Yankees, hit his 62nd home run of the season during a Tuesday night game against the Texas Rangers in Arlington, Texas.

Fans in the stands erupted in cheers and his teammates gathered at home plate to meet him, offering hugs one after another.

For decades, the elder Yankee’s mark stood alone as baseball’s overall single-season home run record. Contemporaries like Willie Mays and Hank Aaron couldn’t touch it. Nor could many of the stars that followed: not Mike Schmidt, not Reggie Jackson, not Ken Griffey Jr.

As an all-MLB record, Maris’ milestone was finally surpassed during the home run race of 1998, when Mark McGwire of the St. Louis Cardinals and Sammy Sosa of the Chicago Cubs (both National League players) captured the nation’s attention in their simultaneous effort to match, then beat, the record.

In 2001, Barry Bonds of the San Francisco Giants, also in the NL, passed them both when he hit 73 homers. Bonds’ feat still stands today on baseball’s record books as the highest-ever single-season total.

But for many baseball fans, those McGwire-Sosa-Bonds seasons are tarnished. All three players are widely believed — or in McGwire’s case, have admitted — to taking performance-enhancing drugs during those years.

And so, Maris’ record had lived on: Officially, it was the American League record; unofficially, in the minds of many purists, it was the so-called “real” home run record.

Either way, since MLB began drug testing players in 2003, no player from either league had matched it.

Judge has been an impressive slugger since his first major league at-bat, when he hit a home run on just his fourth pitch as a Yankee. In his first full season, he set the MLB record for most homers by a rookie with 49 dingers.

Injuries had kept him from reaching that potential — until now.

In his seventh season, the 30-year-old has shattered his previous bests. In addition to his 62 home runs, Judge has 131 RBIs — best in the American League — and his batting average is a formidable .311. With a little luck, he could end the season leading his league in all three statistics and scoop up a Triple Crown, the first player to do so in a decade.

What to Eat in Paris Right Now, according to Musician Gracie Abrams

Victor Wembanyama Is Unlike Anything You’ve Seen Before (No, Really) | News, Scores, Highlights, Stats, and Rumors

Senate Democrats just picked up one more vote. Here’s what that means : NPR