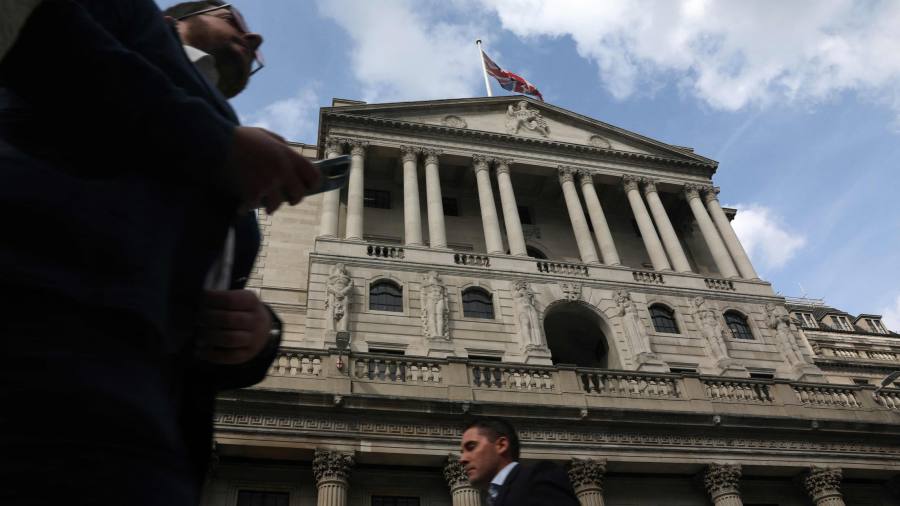 The 10-year benchmark gilt yield has increased 1.45 percentage points in September to 4.2 per cent, the largest monthly jump stretching back to 1979. Two-year yields have also lurched from 3 per cent at the end of August to 4.5 per cent, the highest level in more than 14 years. Bond yields rise when prices fall.

“The market has delivered its verdict and it’s not a good one” — Vivek Paul, UK chief investment strategist for the BlackRock Investment Institute

The gilt turmoil also hit the housing sector, with leading mortgage lenders such as Virgin Money and Halifax halting new home loans in response to the soaring yields and volatility.

The pound was up 0.9 per cent at $1.0776 in Tuesday Asia trading, recovering slightly a day after it hit a record low of $1.035 against the dollar. The Treasury and Bank of England attempted to calm markets with co-ordinated statements, with the latter saying it would “not hesitate to change interest rates” to keep inflation under control, but it dashed market hopes of an emergency rate rise to prop up the pound.

As policymakers head into “crisis mode”, Kwarteng’s rightwing economic agenda is about to be put to the test. But it also faces scepticism across the Atlantic: a top US Federal Reserve official warned that the UK’s fiscal plan had increased risks of a global recession.

FT economics editor Chris Giles and political editor George Parker compare the current crisis to previous rises and falls. The FT View is the government and the BoE need to act quickly to restore credibility. Katie Martin argues that rather than blaming hedge funds or the strong dollar for sterling’s collapse, we should look to the misnamed “mini-Budget”.

How do you expect Kwarteng’s “mini-Budget” and the ensuing market turmoil will affect you? Let me know — email at firstft@ft.com. Thanks for reading FirstFT Europe/Africa — Jennifer

1. Russia: ‘no decision taken’ on border closures The Kremlin sought to ease panic about the mobilisation of army reserves by denying reports it would close the border or introduce martial law. Tens of thousands of people are refusing to enlist, in the biggest backlash against Moscow since the invasion of Ukraine.

2. Ofgem forced staff to reapply for jobs amid energy crisis Senior staff at the UK energy regulator were forced to reapply for their jobs as part of a restructuring that consultancy McKinsey was paid £2mn to help design. The staff reorganisation came as Ofgem was under severe pressure from the collapse of 29 retail companies.

3. Ending UK non-dom regime could raise £3.2bn The Treasury could gain £3.2bn a year if it forced “non-doms” to pay tax on their worldwide income and capital gains, according to a study that estimated overseas UK residents’ unreported offshore earnings totalled £10.9bn in 2018.

4. Investors rush for Porsche shares The German sports car maker is set to deliver one of Europe’s largest IPOs tomorrow. Owner Volkswagen, which expects to bring in €9.4bn on the Porsche listing, is raising money to invest in electric vehicles and develop software to compete with Tesla.

5. Elon Musk offers Iranians uncensored internet Musk’s Starlink has activated its satellite broadband service in Iran, after the US relaxed sanctions that had barred internet services and communication networks from the country amid protests that have caused more than 40 deaths.

UK port strike About 1,900 Unite members employed at Felixstowe port, which is responsible for 48 per cent of the country’s container goods, will begin a second eight-day walkout in a dispute over pay.

Labour leader’s speech Sir Keir Starmer will tell his party’s conference in Liverpool that Labour stands for “sound money” as he seeks to claim the mantle of economic competence and criticises Kwasi Kwarteng’s tax-cutting, high-borrowing mini-Budget.

Nasa’s Artemis I lift off The US space agency’s most powerful rocket is scheduled to lift off from Kennedy Space Center in Florida, in the first in a series of increasingly complex missions to build a long-term human presence at the Moon for decades to come. (Nasa)

Keep up with the important business, economic and political stories in the coming days with the FT’s Week Ahead. Subscribe here. Don’t miss our FT News Briefing audio show — a short daily rundown of the top global stories.

Can Nigeria’s brain-drain be reversed? Discussing your “japa” plans — Yoruba slang for “emigration” — is a national pastime for young, educated, middle-class Nigerians, particularly in Lagos. Those leaving cite a range of reasons, from a worsening security situation to economic stagnation. It could even be a consideration in choosing a partner, writes Aanu Adeoye.

Far-right Meloni taps into Italians’ wish for radical change After two decades of economic torpor, Brothers of Italy leader Giorgia Meloni’s victory reflects Italians’ desire for a new direction. Set to be the country’s first female prime minister, the far-right firebrand has pledged to boost the economy and work with Brussels.

Join FT correspondents today from 1-2pm BST for a subscriber-only virtual briefing on the Italian election results. Get your pass here and submit your questions for the panellists.

Kwasi Kwarteng’s policies won’t get Britain working again Inactivity — economists’ term for people who are neither working nor looking for work — is on the rise. It would certainly help the country’s inflation and growth problem if more people joined the labour market. But that requires investment in health, social care and childcare, writes Sarah O’Connor.

The cost of China’s information vacuum As China has grown into a superpower, knowledge and expertise about it accumulated by a generation of scholars, diplomats and businesspeople has become more important than ever. But reduced access for foreign experts is making it harder for governments to understand Beijing’s decision-making.

The scramble for rare earths The war in Ukraine has demonstrated just how inadvisable over-dependence on a single supplier can be in the gas market. That is also the reality for the continent’s galloping consumption of rare earth metals, writes Misha Glenny, rector of the Institute for Human Sciences in Vienna.

Young entrepreneurs are capitalising on TikTok and Instagram’s marketing potential to build successful businesses. Their personal, playful and almost grassroots events contrast sharply with pop-ups by mainstream brands — and help lure in long queues of teens.

Has Inflation Peaked In The United States? – Bitcoin Magazine