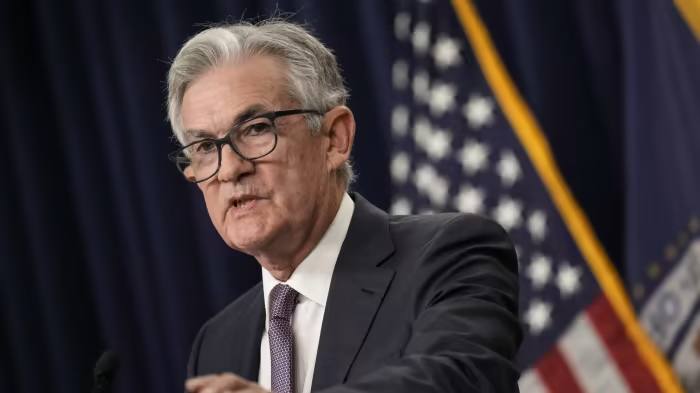 Good morning. European and Asian stock markets fell today after the US Federal Reserve announced a third straight 0.75 percentage point rise in interest rates, and suggested it would keep borrowing costs high well into next year to tame rampant inflation.

In one of his gloomiest pronouncements to date, Fed chair Jay Powell refused to rule out a recession in the world’s largest economy after the US central bank raised interest rates to a target range of between 3 per cent and 3.25 per cent.

“No one knows whether this process will lead to a recession or if so, how significant that recession would be,” Powell said in response to a question at a press conference after the decision.

Powell’s stark comments caught US investors off guard. An early rally faded and the S&P 500 ended the day 1.7 per cent lower, taking its losses for the year to more than 20 per cent. The tech-focused Nasdaq Composite declined 1.8 per cent.

In Europe, sterling extended its recent declines against the greenback, falling below $1.13. The Bank of England is due to announce its latest interest decision later today, with analysts at JPMorgan saying it is too “close to call” whether the UK central bank will raise its policy lending rate by 50 or 75 percentage points.

Elsewhere in Europe, central banks followed the Fed in continuing to tighten monetary policy as they try to stamp out inflation. Norway’s central bank lifted its benchmark rate by 50 basis points and the Swiss National Bank increased its key lending rate by 75bp, taking it into positive territory for the first time since 2014.

Do you think the Fed is raising interest rates too quickly? Do you think its aggressive monetary policy will lead to a recession? Email me at firstft@ft.com or hit reply on this email.

Here is the rest of today’s news — Gordon

1. Donald Trump’s business empire imperilled by sweeping NY fraud lawsuit The New York state attorney-general has sued Donald Trump and three of his adult children for what she called an “astounding” fraud to falsely inflate the value of assets held by their family business.

3. US bank chiefs warn of China exit if Taiwan is attacked The leaders of JPMorgan Chase, Bank of America and Citigroup have committed to comply with any US government demand to pull out of China if Beijing were to attack Taiwan.

4. Russia releases foreign PoWs in brokered prisoner swap Russia has released a number of prisoners, including Britons and Americans, after mediation by Saudi Arabia’s Crown Prince Mohammed bin Salman. The prisoners have been flown to the Gulf kingdom, from where they will be repatriated.

5. Seven dead in Iranian protests over hijab At least seven people have been killed in protests across Iran, officials said, after thousands took to the streets in recent days in anger at the death of a young woman arrested for allegedly failing to observe the Islamic dress code.

US jobless claims: The US labour department will release data on new applications for unemployment assistance. Economists expect jobless claims to tick up to 218,000 from last week’s 213,000, as polled by Refinitiv.

US rail unions vote: The potential for an economically devastating rail strike once again looms over the US supply chain. Rail workers are scheduled to vote on the eleventh-hour labour agreement struck last week by US president Joe Biden between rail unions and railroad companies.

Bank CEOs: The chief executives of the US’s largest consumer banks will appear before the senate committee on banking, housing, and urban affairs for a second day of congressional testimony.

Company earnings: FedEx may provide more insight into last week’s profit warning in which it said it anticipates business conditions to weaken as demand for package shipments has declined. Separately, retailer Costco is forecast to report revenue of $70.2bn, up from $61bn a year ago, and earnings per share of $4.16.

FT Business Book of the Year: The shortlist is out for the year’s most compelling and enjoyable insight into modern business, with £30,000 awarded to the winner and £10,000 to each runner-up. Check out the longlist here.

The next hurdle for unions in the US Over the past year, Starbucks baristas across the US have banded together to form unions and workers at Amazon have joined forces to organise in their workplaces. In a new podcast, labour and equality correspondent Taylor Nicole Rogers explains how these and other new unions are running up against a classic problem when trying to organise in the US.

Saudi Arabia and the US are drifting back on to the rocks Joe Biden’s embarrassment at fist bumping Mohammed bin Salman in July would have been worth it if it had undercut Vladimir Putin’s Russia, says Edward Luce. No such result has been visible, he says. Can the US president do anything to dissuade Saudi Arabia from being a recurring thorn in America’s side?

What a far-right Italy means for Europe Polls suggest Sunday’s general election in Italy will result in a far-right government led by conservative firebrand Giorgia Meloni. It would mark Italy’s first experiment with far-right rule since fascist dictator Benito Mussolini and decision makers in Brussels, Washington and Moscow are watching closely.

Bitcoin can’t be separated from crypto Why do the “bitcoin maximalists” claim bitcoin is not a cryptocurrency? One can see why they might be keen to distance themselves from cryptoland scams. But their arguments don’t stand up, writes Jemima Kelly.

Irish youth look overseas The country’s history of emigration has seen an estimated 10mn people leave since 1800. While in the past, many were forced out by famine and economic crises, young people now are drawn to jobs abroad or the freedom of living in more open societies.

Lobster thermidor, Michelin star chefs and recipes that come with non-disclosure agreements: take a look inside the test kitchens of the world’s most experimental airlines.