Will the ECB deliver a historic rate rise? 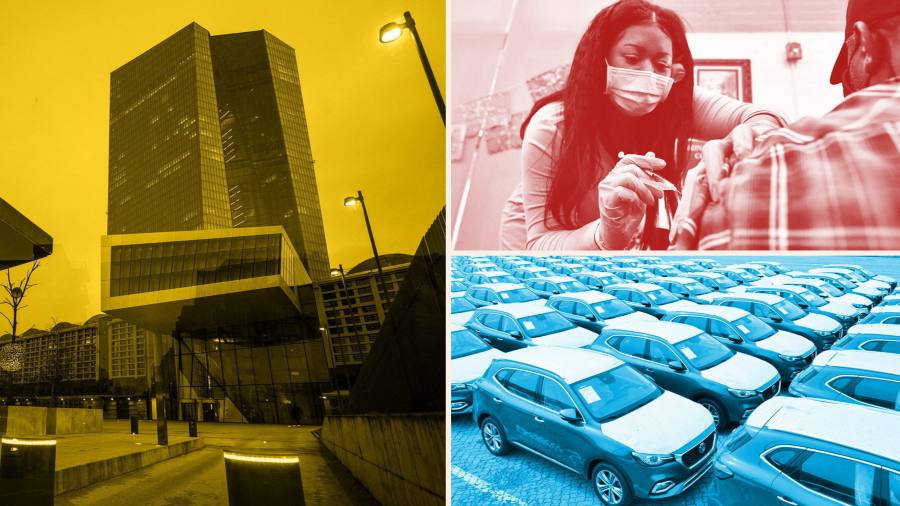 
Will the European Central Bank deliver a historic rate rise?

Even before last week’s data showing eurozone inflation hit a record high and unemployment fell to a new low, markets were already betting the European Central Bank would step up the pace of interest rate rises when it meets on Thursday.

The ECB raised rates in July for the first time in more than a decade, lifting its benchmark deposit rate from minus 0.5 per cent to zero.

But in the past week, a string of ECB governing council members have called for it to act “forcibly” by “front-loading” the path of future rate rises to prevent surging inflation from becoming a 1970s-style spiral of persistently higher wages and prices.

Investors have taken note, driving bond yields up to bet on a strong probability of the ECB raising rates by 0.75 per cent for only the second time in its history. The first was a shortlived technical adjustment only days after the euro’s launch in 1999.

“The key decision at the upcoming meeting will be between a 50 basis point or 75 basis point hike,” Jens Eisenschmidt, an economist at Morgan Stanley, wrote in a note to clients. “We think it is a very close call, with good arguments on each side, but ultimately think those advocating for a larger hike will prevail as September offers the best opportunity to send a clear signal of determination.”

The ECB could also announce measures to reduce a multibillion bonanza it is set to give to banks from its ultra-cheap lending scheme known as the targeted longer term refinancing operations, or TLTRO, he said. But other moves, such as starting to shrink its balance sheet, are likely to wait until its meetings in October or December. Martin Arnold

Did growth in US services activity slow last month?

Activity in the US services sector is expected to have slowed in August to the lowest reading since May 2020, as economic growth decelerates amid aggressive rate increases implemented by the Federal Reserve to tackle persistently high inflation.

The ISM non-manufacturing index is forecast to report a reading of 54.8 from 56.7 in July, according to economists polled by Reuters.

Although any reading above 50 indicates an expansion, growth in the services sector is expected to slow, after recovering from a drop in activity from lockdowns at the start of the pandemic. Oren Klachkin, lead US economist at Oxford Economics, said the best days of the services industry’s recovery are “behind us”.

“The post-Covid pop in activity is behind us,” said Klachkin. “Economic growth was bound to slow eventually. More normal spending patterns mean growth will slow.”

In an effort to tame soaring inflation, the Federal Reserve implemented two consecutive rate increases of 0.75 percentage points to cool down the economy. US inflation moderated in July, but consumer spending slowed more than expected, rising 0.1 per cent and missing expectations for a 0.4 per cent increase, according to the personal consumption expenditures price index.

Although some aspects of the services industry like supply chain conditions have improved, labour costs, prices and inventories have yet to rebound to pre-pandemic conditions.

“Better inflation and supply chain conditions should result in some release of pent-up demand, all else equal. However, price and supply-side dynamics remained far from pre-Covid norms,” said Klachkin. Alexandra White

China’s exports have been a rare bright spot for the economy, which has been battered by Covid-19 lockdowns. The country’s surplus in July confounded experts, jumping to a record of more than $101bn, boosted by a bigger-than-expected 18 per cent increase in exports.

Imports missed expectations, however, rising just 2.3 per cent compared with the same period a year before, suggesting sustained weakness in domestic demand in the country.

The economy took a further hit in August as heatwaves and droughts led to power shortages and led several provinces and cities to suspend or restrict electricity supplies to factories.

There were further hints that the country’s export growth would slow in August in the latest manufacturing purchasing managers’ index, which notched a second consecutive month in contraction territory. The new export orders sub-index came in at 48.1, below the 50-point threshold that separates contraction from expansion for the 16th month in a row.

“The robust export growth seen over the past two years is really behind us and set to decelerate over the next few quarters, as major developed economies enter recessions amid a more synchronised global slowdown,” wrote analysts at Nomura, the Japanese bank.

Analysts at Barclays, meanwhile, forecast that China will post a smaller trade surplus of $91bn for the month, with imports growth increasing to 4 per cent and exports growth slowing to 14 per cent.

“We expect . . . import growth to remain in low-single digits in August in view of weaker domestic demand . . . led by contracting property investment and subdued consumption,” the bank’s analysts wrote in a note. William Langley