Ukraine and Russia trade blame over threats to the Zaporizhzhia nuclear plant : NPR 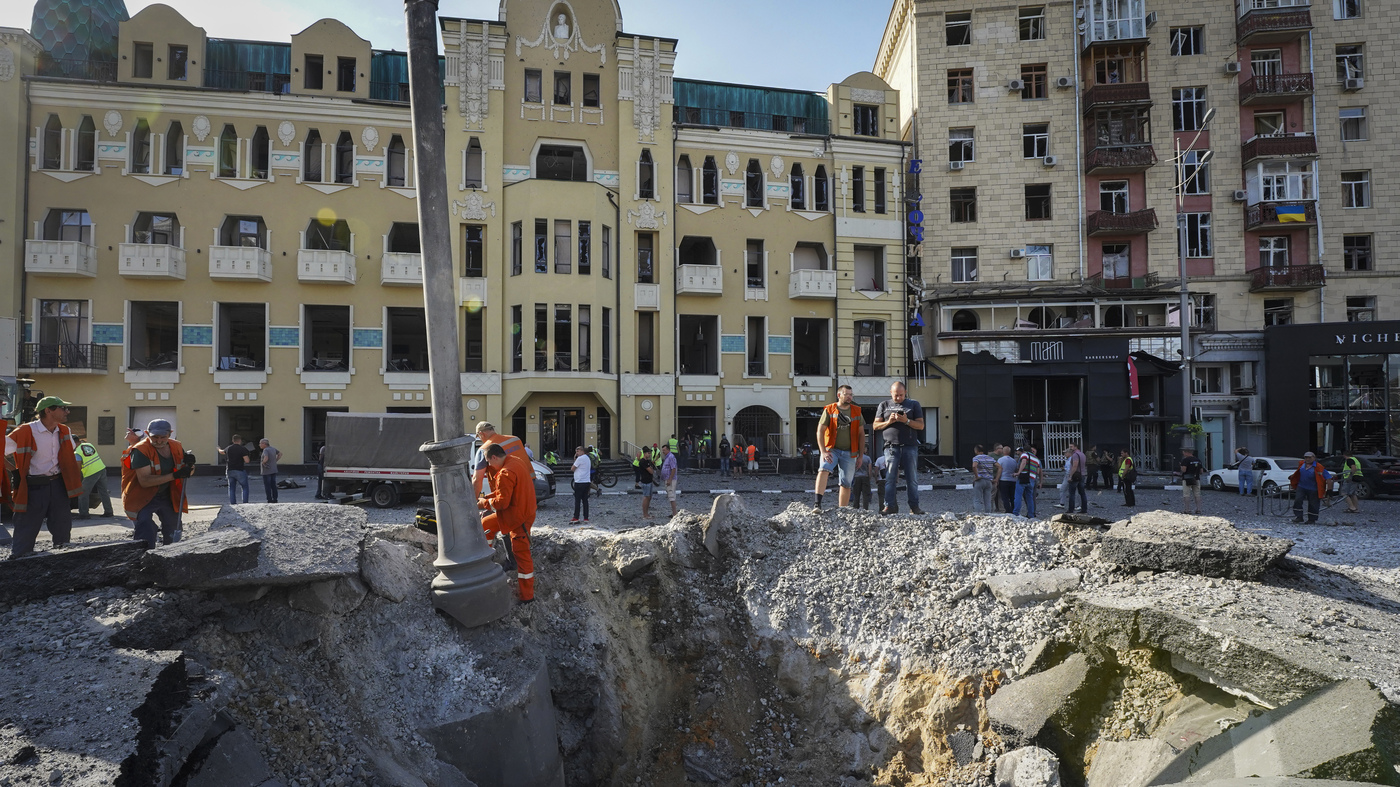 A view of a crater from a night Russian rocket attack is seen in downtown Kharkiv, Ukraine, on Saturday.

A view of a crater from a night Russian rocket attack is seen in downtown Kharkiv, Ukraine, on Saturday.

KYIV, Ukraine — Concern about the potential for a radiation leak at Europe’s largest nuclear power plant persisted as Ukrainian authorities said Saturday that Russian forces fired on areas just across the river and Russia claimed Ukrainian shelling hit a building where nuclear fuel is stored.

Authorities were distributing iodine tablets to residents who live near the Zaporizhzhia Nuclear Power Plant in case of radiation exposure, which can cause health problems depending on the amount a person absorbs.

Much of the concern centers on the cooling systems for the plant’s nuclear reactors. The systems require power to run, and the plant was temporarily knocked offline Thursday because of what officials said was fire damage to a transmission line. A cooling system failure could cause a nuclear meltdown.

Russian forces occupied the nuclear plant complex early in the 6-month-old war in Ukraine, and Ukrainian workers have kept it running. The Ukrainian and Russian governments have repeatedly accused the other of shelling the complex and nearby areas, raising fears of a possible catastrophe.

Periodic shelling has damaged the power station’s infrastructure, Ukraine’s nuclear power operator, Energoatom, said Saturday. “There are risks of hydrogen leakage and sputtering of radioactive substances, and the fire hazard is high,” it said.

In the latest conflicting attack reports, the governor of Ukraine’s Dnipropetrovsk region, Valentyn Reznichenko, said Saturday that Grad missiles and artillery shells hit the cities of Nikopol and Marhanets, each located about 10 kilometers (6 miles) and across the Dnieper River from the plant.

But Russian Defense Ministry spokesman Igor Konashenkov said Ukrainian forces had fired on the plant from Marhanets. Over the past day, 17 Ukrainian shells hit the plant, with four striking the roof of a building that stores nuclear fuel, he said.

It was not immediately possible to verify either account given restrictions on journalists’ movements and the ongoing fighting.

The U.N.’s atomic energy agency has tried to work out an agreement to send a team in to inspect and help secure the plant. Officials said preparations for the visit were underway, but it remained unclear when it might take place.

Ukrainian President Volodymyr Zelenskyy said it was essential for International Atomic Energy Agency representatives to get to the plant as soon as possible and to help keep it “under permanent Ukrainian control.”

“The situation remains precarious and dangerous,” Zelenskyy said in latest nightly address. “Any repetition of (Thursday’s) events, i.e., any disconnection of the station from the grid or any actions by Russia that could trigger the shut down of the reactors, will once again put the station one step away from disaster.”

Ukraine has claimed Russia is using the power plant as a shield by storing weapons there and launching attacks from around it. Moscow, for its part, accuses Ukraine of recklessly firing on the nuclear complex.

The dispute over the plant led Russia late Friday to block agreement on the final document of the four-week-long review of the U.N. treaty that is considered the cornerstone of nuclear disarmament. The draft document of the Nuclear Nonproliferation Treaty review conference criticized Russia’s takeover of the Zaporizhzhia plant.

The deputy head of Russia’s delegation said the conference became “a political hostage” to countries that were trying “to settle scores with Russia by raising issues that are not directly related to the treaty.”

Elsewhere in Ukraine, one person was killed and another wounded in Russian firing in the Mykolaiv region, local government officials said. Mykolaiv city is an important Black Sea port and shipbuilding center.

The governor of the eastern Donetsk region, Pavlo Kyrylenko, said Saturday that two people were killed in Russian firing on the city of Bakhmut, a significant target for Russian and separatist forces seeking to take control of the parts of the region they do not already hold.

The British government said Saturday that it was giving Ukraine underwater drones and training sailors to use them to clear mines from the ravaged country’s coastline. Mines laid in the Black Sea during the war have hampered seaborne exports of Ukrainian grain to world markets, although an agreement reached in July has allowed shipments to resume along a single corridor.

More than 1 million metric tons of Ukrainian foodstuffs have been shipped since the start of August under the Black Sea grain deal, the United Nations said Saturday.