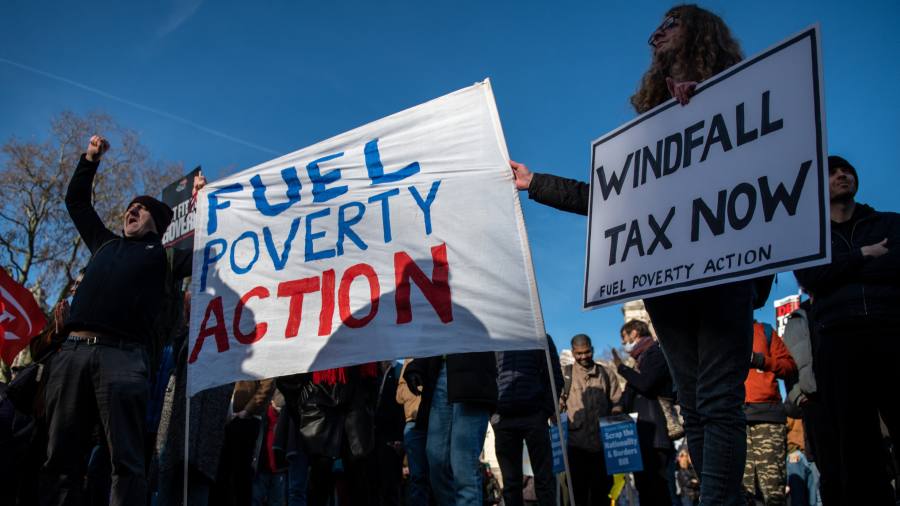 That’s roughly what these items would cost if they had risen in line with the wholesale gas price this year.

The boss of Octopus Energy started the trend of using familiar items to put soaring energy bills into perspective. Following Friday’s energy price cap announcement, I’m afraid the “price shock” of an 80 per cent increase to average household bills is just the start.

Annual bills of £3,549 for the average dual-fuel user from 1 October are nearly one-third higher than the £2,800 estimate the government’s £15bn energy support package was based on, and are set to soar further.

To say current energy help measures are inadequate is an understatement. Without further help, suppliers warn the majority of customers will be plunged into fuel poverty by Christmas. Citizen’s Advice estimates 18mn people — one in three UK households — simply won’t be able to pay.

Yet as consumers panic, the silence from Westminster is deafening.

In his final days in office, Boris Johnson — a man who has never had to worry about paying a gas bill — said the British public would have to endure soaring energy prices in order to resist Russian president Vladimir Putin.

But on the home front, politicians must offer more than warm words. The personal finances of millions of people stand to be nuked this winter.

There is so much that can be done now to manage the crushing financial blows we know are coming, and the Conservative leadership contest simply does not excuse the lack of government action to manage the devastating effects of these price rises.

Amid calls to freeze the price cap and extend existing support packages, here are some big issues MPs and regulators must address urgently as they draw up policy solutions.

If you’re among the 86 per cent of UK households on tariffs governed by the price cap, expect your energy supplier to ask to increase your direct debit before the next prime minister takes office.

For the average user, the £3,549 cap boils down to energy bills of around £300 a month from October 1. Depending on your usage and credit, your supplier may demand much more.

As we wait for news of further help measures, how many more will cancel? Without more support, unprecedented numbers stand to run up huge energy debts this winter — suppliers and regulators must work urgently to manage this.

Indebted customers are commonly switched to prepayment meters. However, the charity Fuel Bank Foundation estimates average monthly costs of £500 this winter for 4.5mn UK households charged up front for energy usage, as they pay proportionally more in colder months.

This is a horrific example of the ‘poverty premium’ and so too is the higher price cap of £3,608 for prepayment customers. In any case, the rising cost of living means the budgets of the poorest have been crushed before October’s price rises take effect.

Fuel poverty charities are already overwhelmed with requests for emergency vouchers from customers who cannot afford to top up, and have no electricity, heating or hot water.

“Debt, destitution and ultimately, death . . . that’s absolutely what we see ahead this winter,” says Gareth McNab, director of external affairs at Christians Against Poverty, one of the UK’s biggest providers of free debt advice.

He stresses it is not just the cold that will kill this winter, but the huge impact of indebtedness on people’s mental health.

“People turning to us for help are terrified,” he says. “The cost of living crisis is costing lives. An agenda item at a recent meeting was ‘suicides in the past week’. We urgently need a powerful and impactful intervention.”

CAP is calling for a moratorium on government debts being deducted at source from benefit claims — a problem affecting nearly half of those who approached the charity for help.

Up to 25 per cent of benefits can be clawed back to repay historic tax credit debts or universal credit advances, and no affordability checks are required. This must stop.

A discounted social tariff to protect the poorest households from being bankrupted by huge energy bills is rapidly gaining credence (even suppliers support it). These already exist for broadband customers on low incomes, but time is running out to launch one before energy prices soar.

Social tariffs would limit the unfairness of standing charges, which are set at a fixed daily rate no matter how little power you use, and have ballooned with the cost of energy company failures.

By October, prepayment customers who have not used a penny of gas since April will have to load nearly £70 on to meters to get the heating back on just to cover the build up of standing charges.

The lack of further help combined with scarily high future price cap predictions is pushing more consumers to consider paying over the odds for a fix — although deals are shockingly expensive.

“I’ve got a three-bedroom rural bungalow, not a cannabis farm!” one angry customer wrote on Twitter at Scottish Power this week after she was quoted just under £17,000 a year for a fixed-rate tariff.

Right now, it’s likely you’ll only be able to get a fix from your existing supplier. If energy prices fall in future — or more support is forthcoming — expect to pay a £300 exit penalty.

Not in debt to your supplier? You can ask for a variable direct debit where you only pay for the energy used that month, although these tariffs are not openly advertised. Hatvani’s Facebook group is a gold mine of energy saving ideas (air fryers, installing thermostatic radiator valves and lining curtains with old fleeces) to cut bills.

Initiatives to incentivise off-peak usage with bill rebates are welcome, but with the crisis expected to last for years, green energy subsidies for home insulation and renewable generation are also needed.

Finally, ministers cannot ignore the cost of doing business as commercial energy contracts expire. The pub selling you a pint; the café where you buy coffee; even corner shops selling ciggies. Small businesses can’t quadruple their prices, but in many cases, their energy bills already have.