Household energy bills in Britain are projected to peak at more than £4,420 a year on average next spring, posing a “fresh shock” for households already enduring a cost of living crisis.

The energy consultancy Cornwall Insight on Tuesday raised its forecasts for Britain’s price cap following an announcement by the energy regulator Ofgem of contentious changes to the way the level is calculated.

The latest forecasts for the cap to more than double from its current level are likely to heap fresh pressure on Conservative party leadership contenders Liz Truss and Rishi Sunak to offer more support for households this winter.

The opposition Liberal Democrats have called for the next rise in the price cap, scheduled for October 1, not to be passed on to consumers — with the difference funded by an increase in the government’s recently imposed windfall tax on oil and gas producers. Oil and gas groups including BP and Shell have been generating bumper profits from the high prices.

Cornwall Insight, which is among the most accurate forecasters of British domestic energy bills, warned the price cap could rise from £1,971 a year on average at present to £3,582 in October — an increase of more than 80 per cent. The cap would then jump to £4,266 in January before peaking at £4,427 in April next year, according to the estimates.

Britain’s energy price cap dictates a maximum that suppliers can charge per unit of energy and also limits their profit margins. It affects the vast majority of the country’s households — about 24mn of an estimated 27.8mn — that are not on fixed-price deals. October’s price cap level will be announced by Ofgem on August 26.

Cornwall Insight has sharply revised up its estimates following methodological changes announced by Ofgem last week that allow energy suppliers to recover the full costs of buying energy for their customers for the coming winter at current high wholesale prices. Before the changes, Cornwall Insight had forecast that the cap would reach about £3,600 a year in January.

Ofgem insisted it had to make changes to the price cap to avoid another slew of energy company collapses. Since January 2021, more than 30 energy retailers have gone bust. The costs of dealing with those failures are expected to exceed £4bn, which will be recovered via a levy on households’ energy bills. 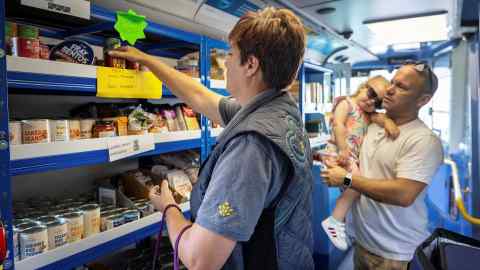 Investec was the first to warn last week that Ofgem’s adjustments could force January’s price cap beyond £4,200 a year on average, although the regulator at the time insisted the forecast was “a long way off” its own “working estimate” of where the price cap might be at the start of 2023.

Ofgem said in response to the Cornwall Insight numbers that “the wholesale market continues to move extremely quickly so no forecast for next year is at all robust”.

“We cannot stop others from making predictions but we would ask that extreme caution is applied to any predictions for the price cap in January or beyond,” the regulator added.

Craig Lowrey, principal consultant at Cornwall Insight, acknowledged that the latest forecasts would come as a “fresh shock” to households already worried about how they will make ends meet this winter.

He suggested it “may be time” to reconsider the energy price cap altogether. “If it is not controlling consumer prices, and is damaging suppliers’ business models, we must wonder if it is fit for purpose — especially in these times of unprecedented energy market conditions,” he said.