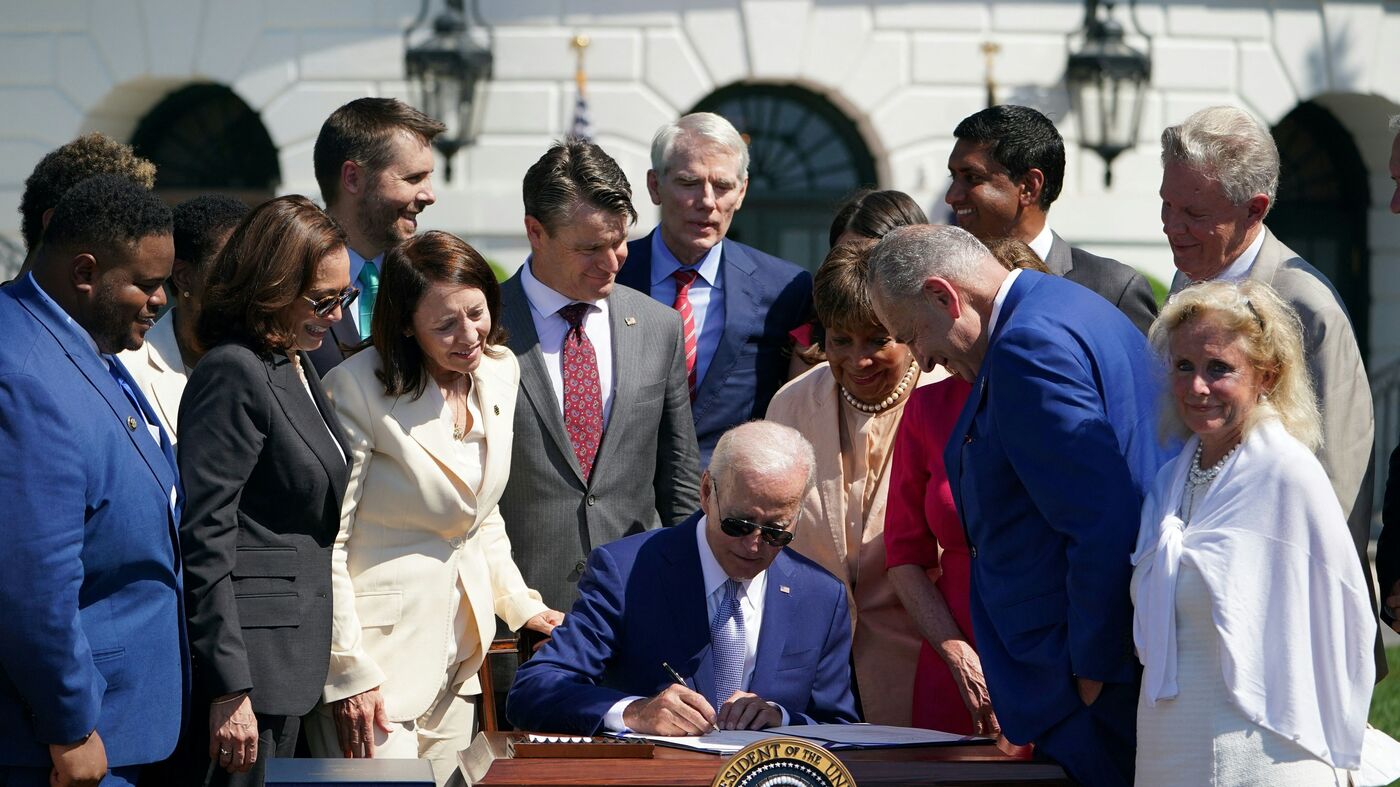 President Biden signed the CHIPS and Science Act on the South Lawn of the White House on August 9. The legislation is aimed at boosting the domestic production of semiconductors.

President Biden signed the CHIPS and Science Act on the South Lawn of the White House on August 9. The legislation is aimed at boosting the domestic production of semiconductors.

President Biden on Tuesday heralded legislation that will pump almost $53 billion into research and manufacturing of semiconductor chips, which power everything from medical devices and cars to computers and weapons systems, as a “once-in-a-generation investment in America itself.”

“Today America is delivering, and I honest to God believe that 50, 75, 100 years from now, people who will look back on this week, they’ll know that we met this moment,” Biden said ahead of signing the CHIPS and Science Act, short for Creating Helpful Incentives to Produce Semiconductors for America Act. The ceremony was attended by chief executives of Lockheed Martin, Intel, HP, Micron, and Advanced Micro Devices, along with union leaders and lawmakers.

The legislation provides $10 billion to invest in regional technology hubs across the country and a 25% investment tax credit for expenses for manufacturing of semiconductors and related equipment. It also authorizes roughly $100 billion in spending over five years on scientific research, including more than $80 billion for the National Science Foundation.

This was a week intended to be full of victory laps as Biden emerged from his COVID isolation just as Senate Democrats passed a signature climate, health care and taxes package. But it was overshadowed on Monday night by the news that FBI agents had searched the home of his predecessor, former President Donald Trump.

The unusual search prompted cries of political interference from conservative lawmakers. Those allegations have not been substantiated. A White House official said they did not receive notice of the search, and referred questions to the Justice Department. Biden did not take questions at the event.

Biden also plans to sign off on the Senate’s ratification clearing the way for Finland and Sweden to join NATO on Tuesday. And on Wednesday, the White House plans an event for Biden to sign off on new funding for veterans exposed to toxic burn pits and their survivors.

Semiconductor makers are planning big expansions in the United States

The CHIPS bill is aimed at boosting domestic manufacturing of semiconductor chips in a bid to stay competitive with China. According to the Congressional Research Service, nearly four-fifths of global fabrication capacity was in Asia as of 2019.

During his remarks, Biden described how the lack of domestic capacity for semiconductor manufacturing contributed to inflation when factories abroad shut down during the coronavirus pandemic.

He pushed back on criticism of subsidizing the semiconductor industry, saying the law is “not handing out blank checks to companies.”

“I’m ordering my administration to be laser-focused on the guardrails that will protect taxpayers dollars,” Biden said. “It means making sure that companies partner with community colleges and technical schools, offer training and apprenticeship programs, and work with small minority-owned businesses. We’ll have the power to take back any federal funding if the companies don’t meet these commitments required by the bill.”

The White House is promoting investments in American semiconductor manufacturing that companies have announced in anticipation of Biden signing the legislation into law, including a $40 billion pledge from Micron in memory chip manufacturing, and a $4.2 billion investment by Qualcomm and GlobalFoundries to expand production. Qualcomm announced has it will increase semiconductor production domestically by 50% over the next five years.

It’s the latest piece of bipartisan legislation to make it to Biden’s desk, following gun safety and infrastructure legislation.

Seventeen Senate Republicans voted in favor of the legislation. 24 House Republicans also voted for the bill, bucking party leadership who attempted to whip against the bill as part of a political fight over a Democratic deal on a climate and tax bill.