In Kenya, promises of marijuana paradise electrify the electorate : NPR 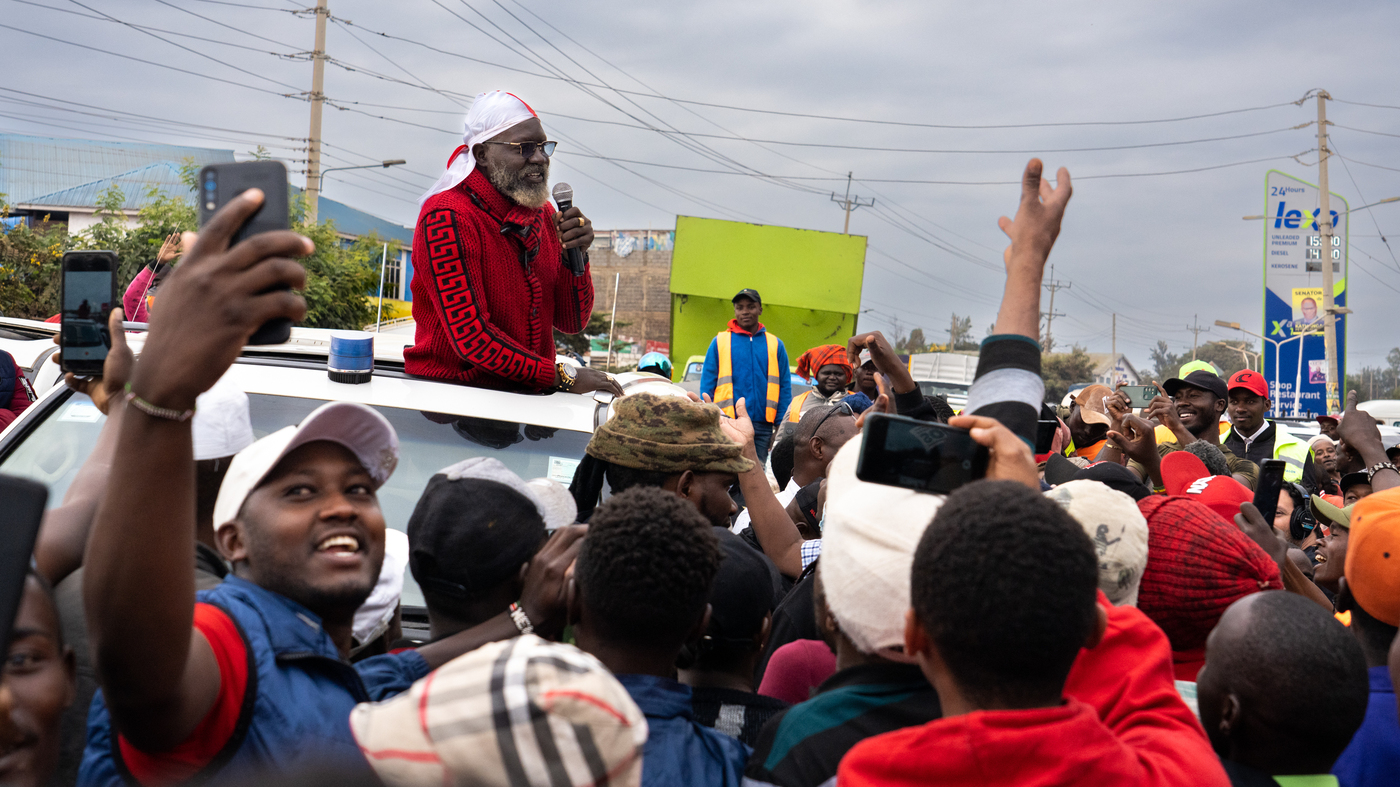 Kenyan presidential candidate George Wajackoyah on the campaign trail in Kenya on Aug. 5.

Kenyan presidential candidate George Wajackoyah on the campaign trail in Kenya on Aug. 5.

MWEA, Kenya — At one of the final rallies of his campaign, George Wajackoyah entered the town of Mwea with his head and shoulders sticking out from the sunroof of an SUV. Other cars followed close behind, one of them with a huge speaker playing reggae and announcing his name.

He’s the Kenyan presidential candidate whose outlandish proposals — including selling hyena testicles to bolster the economy — have electrified young people across this East African nation.

Wajackoyah is a respected human rights lawyer who became an overnight celebrity when he announced his run for president. His unorthodox policies — his main proposition is to legalize marijuana — have shaken up a presidential race dominated by old and familiar faces in a nation of more than 50 million people.

Mwea is a small, rice farming town at the foot of Mt. Kenya, and as soon as the residents realized what was happening, a crowd ran behind Wajackoyah’s vehicle.

“We are the only political party without a billboard, no secretariat, no offices,” said the 63-year-old candidate. “We don’t pay people, because where is the money?”

While nobody here thinks Wajackoyah is going to become Kenya’s next leader (polls show him getting around 2% of the vote), in a tightly fought race he could force the two front-runners — current Deputy President William Ruto and seasoned opposition campaigner Raila Odinga — into a second-round run-off if neither side gets more than 50% of vote during Tuesday’s election.

And the enthusiasm that Wajackoyah’s candidacy is generating — his convoy is mobbed when it pulls to a stop in Mwea — suggests that many Kenyans crave a new way of doing things.

In his Kenya, corrupt politicians will be given the choice on how to die. He smiled big as the crowd cheered at that remark and then he offered his most popular policy proposal.

“We have to change our mindsets to look at the economics and fix those economics — and the only way to fix the economics is by growing weed!” he yelled into the microphone.

Suddenly, you felt the euphoria weaving its way through every corner of the town. Teenage girls shrieked with excitement, and the crowd broke into a chant, “Bhangi! Bhangi,” or pot in Kiswahili.

Maureen Kaonda, who was watching the rally, says Wajackoyah is misunderstood by young people. She says he isn’t talking about smoking weed.

“He is talking about exporting it — to make people rich, to make the country rich,” she said.

“The Kenyan government has told us to plant tea, to plant cotton, but it has not borne fruit,” he said. After years of government promises, politicians are still corrupt and the people are still poor, he added, so maybe now is the time to try something radical.

But, he added, they are all tied to the thing Kenyans care the most about this election: the economy.

He says Wajackoyah’s campaign is part of something new in Kenya. In the past, politics have centered around tribalism. But this time, with high inflation, fuel shortages and high employment, the economy is the more powerful message. And even a fringe candidate like Wajackoyah can feel that.

Chome said he’s doubtful any of his promises will come true. But Wajackoya’s campaign points to one positive development in Kenyan politics: For the first time, he said, politicians are being forced to think about the issues Kenyans most care about.

Away from the rally, Wajackoyah showed his serious side. He transformed from the showman, dancing to reggae on top of a vehicle, to the lawyer defending his radical proposals.

Medical marijuana can be sold to Israel, he said. And if you kill a few corrupt politicians, he added, you’ll rid the country of corruption.

Wajackoyah looks at the lack of industry in the country and proposes selling dog meat to China. He looks at tired Kenyans and proposes a four-day work week.

When this reporter asked if he’s providing Kenyans with false hope with easy answers, he bristled. China and the Philippines, he said, have solved big problems, why can’t Kenya?

When this reporter mentioned that both those countries have atrocious human rights records, he scoffed.

“Human rights my a**,” said the human rights lawyer. “Come on. Let us liberate our country first and then we do what we have to do.”

John Odhiambo contributed to this report.

Chicest Pajama Party Ever (and Everyone Took Home Sleep Milk)