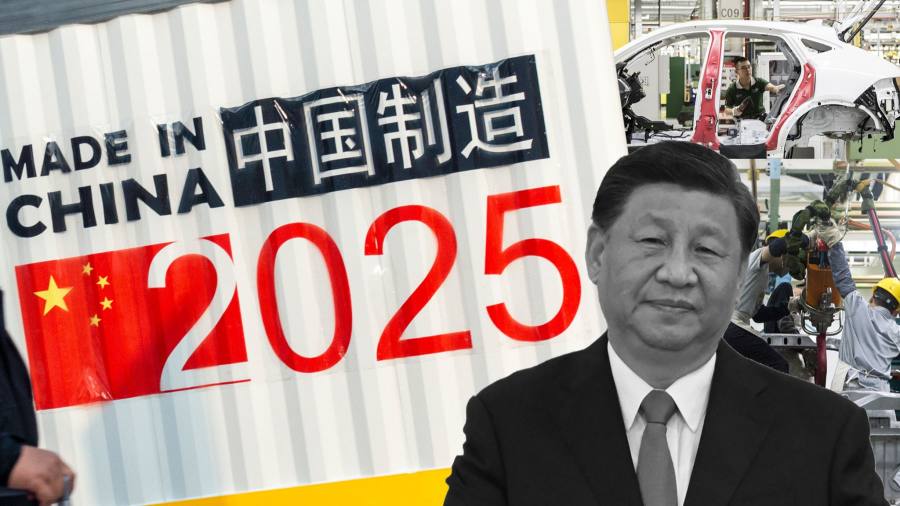 
Seven years after Beijing launched its Made in China 2025 plan to boost cutting-edge manufacturing in the country, the term has virtually disappeared from public discussions and official documents.

But the policy itself has not died. It survives and thrives through government subsidies, which continue to be directed at favoured companies such as electric vehicle manufacturers and chipmakers even as pressures mount on local government finances across China.

Made in China 2025 was originally revealed in May 2015 with great fanfare and an aim to transform the country “from a manufacturing giant to a world manufacturing power” by 2049, the centennial anniversary of the people’s republic.

Governments around the world provide financial assistance to help tech sectors on their territories for various reasons. China is no exception, especially in its efforts to deliver this strategic policy linked to President Xi Jinping’s long-term target of creating “a modern and prosperous socialist state” by that year.

The plan highlighted 10 key areas to bolster — from IT, robotics and new energy vehicles, through biotech and agricultural machinery, to aerospace, maritime and railway equipment — and promised to encourage innovation with a mixture of market-orientated approaches and government guidance.

Beijing stopped using the term as the US waged its trade war against China under President Donald Trump. But a Nikkei Asia analysis of data compiled by Fitch Ratings shows that top recipients of government subsidies are mainly tech companies closely associated with Made in China 2025. The big exceptions are certain energy companies that have been heavily supported for different reasons, including energy security and price stability.

With no convenient data from the Chinese government available on state subsidies, Fitch gathered public disclosures of almost 5,000 mainland-listed companies on the receiving end.

SAIC Motor, the country’s largest automaker by size, in 2021 received the largest amount of subsidies, Rmb4.03bn ($598mn), or 31 per cent more than the year before, taking the crown from China Petroleum & Chemical, or Sinopec, which had dominated for years.

BYD, which recently overtook Tesla as the world’s largest EV maker by vehicles sold, disclosed more than a dozen subsidy items in its latest annual report, including large sums from two “industrial development funds”, one each for automobiles and batteries.

This article is from Nikkei Asia, a global publication with a uniquely Asian perspective on politics, the economy, business and international affairs. Our own correspondents and outside commentators from around the world share their views on Asia, while our Asia300 section provides in-depth coverage of 300 of the biggest and fastest-growing listed companies from 11 economies outside Japan.

Great Wall Motor, a big SUV maker, saw its subsidies jump by 73 per cent from the previous year to almost four times the level of 2019. A large chunk came from a “government industrial policy support fund”. JAC, which mainly produces commercial vehicles, disclosed more than 20 subsidy items, the largest for a “construction project of [a] high-end electric light truck”. Government grants to JAC almost doubled over the past three years, exceeding the company’s aggregate net profits by more than 14 times.

Not quite in the top 10, the world’s largest EV battery maker, Contemporary Amperex Technology (CATL), came in at number 11, its annual subsidy having ballooned 2.6 times to Rmb1.67bn over three years. Chongqing Changan Automobile and Guangzhou Automobile Group were also among the top 20 recipients.

Chips and displays that are vital for a range of tech items are high up in the league standings as well. Semiconductor Manufacturing International Corporation (SMIC), China’s national chip champion, and BOE Technology, the leading display maker, have been regulars on the top 10 list, while 5G network providers China Mobile and China Telecom were ninth and 19th respectively in 2021.

A mainland-listed unit of Taiwan’s Foxconn was again a big beneficiary of Chinese state subsidies, a situation that in the past has raised political tensions in Foxconn’s home market.

The funding is sprinkled to smaller companies, too. An examination of recipients with high ratios of government subsidies to revenue uncovers biotech drugmakers such as Shanghai Yizhong Pharmaceutical and Mabwell (Shanghai) Bioscience.

Foreign governments continue to be concerned about the Made in China 2025 policy. The annual white paper by Japan’s Ministry of Economy, Trade and Industry (METI), published in late June, dedicated a section to China’s state subsidies and quantified the continued rise of payments to companies in the 10 core areas identified by the policy.

Growth accelerated after 2018, when the term was being vanished, it found. Total grants to Made in China 2025-linked companies reached about Rmb100bn in 2020, more than doubling from 2015.

“The overall activities of Chinese companies as a whole have shifted toward these areas,” the report says. “The financial support to these sectors is getting generous.”

The overall amount of government grants in 2021, according to Fitch’s tally, was Rmb217.92bn, or 3.2 per cent less than the year before. This marked the first year-on-year drop since 2009, but all experts contacted by Nikkei Asia believe there has been no change in Beijing’s policy to support tech companies, and the fall is seen as temporary and technical.

The decline could be attributed to the method by which figures are gathered. The total amount is calculated by taking the sums of government subsidies recorded in each year’s profit and loss statement. There are lags where grants are awarded but sit only on the balance sheet until they are actually executed.

There are cases emerging, however, where certain government subsidies are not delivered, stemming from fiscal constraints on local governments.

CPT Technology Group, a Fujian-based LCD display manufacturer, partly blamed an increase in its first-half net loss on a drop in government grants.

The Shenzhen-listed company was supposed to receive a total of Rmb2.64bn in grants from the Futian municipal government in six annual instalments of Rmb440mn after its latest LCD factory in the city went on stream in June 2017. However, the promise was fully met only in the first year. The amount was slashed to Rmb300mn for the following two years and cut again to Rmb100mn paid by last June. This year, it is down to zero.

The Futian government issued a letter promising to fulfil its financial obligations, the company had said in 2020, but the city has admitted that it is under “financial stress”.

Visionox Technology, another Shenzhen-listed panel producer, has not received all the Rmb700mn grant that should have been paid in June 2020 by the administrator of the high-tech industrial development zone of Jingnan-Gu’an district in the northern province of Hebei.

The subsidy was for a state of the art factory to produce active matrix organic light emitting diode (AMOLED) displays for smartphones. The administrator added another Rmb200mn in subsidies in December that year, but no more than Rmb400mn has been actually paid, according to the company’s disclosures.

The company took a rare step in writing off more than Rmb20mn of government grants, meaning it has deemed those receivables to be virtually uncollectible. Similar to CPT, Visionox said its net loss was expected to double in the first half, with a Rmb133mn decrease in subsidies one of the main reasons.

These could be isolated cases, but further deterioration of local government fiscal conditions could possibly affect the amount of public monies to be diverted even to strategic tech companies. Shinichi Seki, a senior economist at the Japan Research Institute who specialises in the Chinese economy, said the “pace of growth of government subsidies would be subdued due to lack of funds by local governments”.

Even though strategies are drawn up in Beijing, a substantial portion of actual payments are made at local level. The current real estate bust has taken away precious income that usually comes from sales of land use rights to developers, while strict adherence to Xi’s zero-Covid policy is requiring that scarce funds be spent on virus testing and other related procedures. Recent tax rebates designed to stimulate the economy have also been taking cash out of local coffers.

Seki sees “lights and shades to be more clear and distinct” in coming years, meaning local governments will become more discriminating when they hand out subsidies.

Zhang Hongyong, senior fellow at the Research Institute of Economy, Trade and Industry in Japan, also foresees changes in the way subsidies are allocated by local governments, given the chronic cash shortage.

“The certification of tech companies would be selective, and there would no longer be a lavish handout style,” he said. Subsidies could be tied to the level of research and development spending, he said.

Beijing seems to be alive to the impact of a weakening fiscal position. In mid June, the State Council instructed local governments to keep their spending priorities straight, even under current financial constraints, stressing there are places to be “appropriately strengthened”. Along with education, medical insurance and infrastructure building, “research and development of science and technology” was mentioned, hinting that corporate subsidies to tech companies will have to go on.

A version of this article was first published by Nikkei Asia on July 22. ©2022 Nikkei Inc. All rights reserved.