The Manchin deal could mean no climate emergency declaration by Biden : NPR 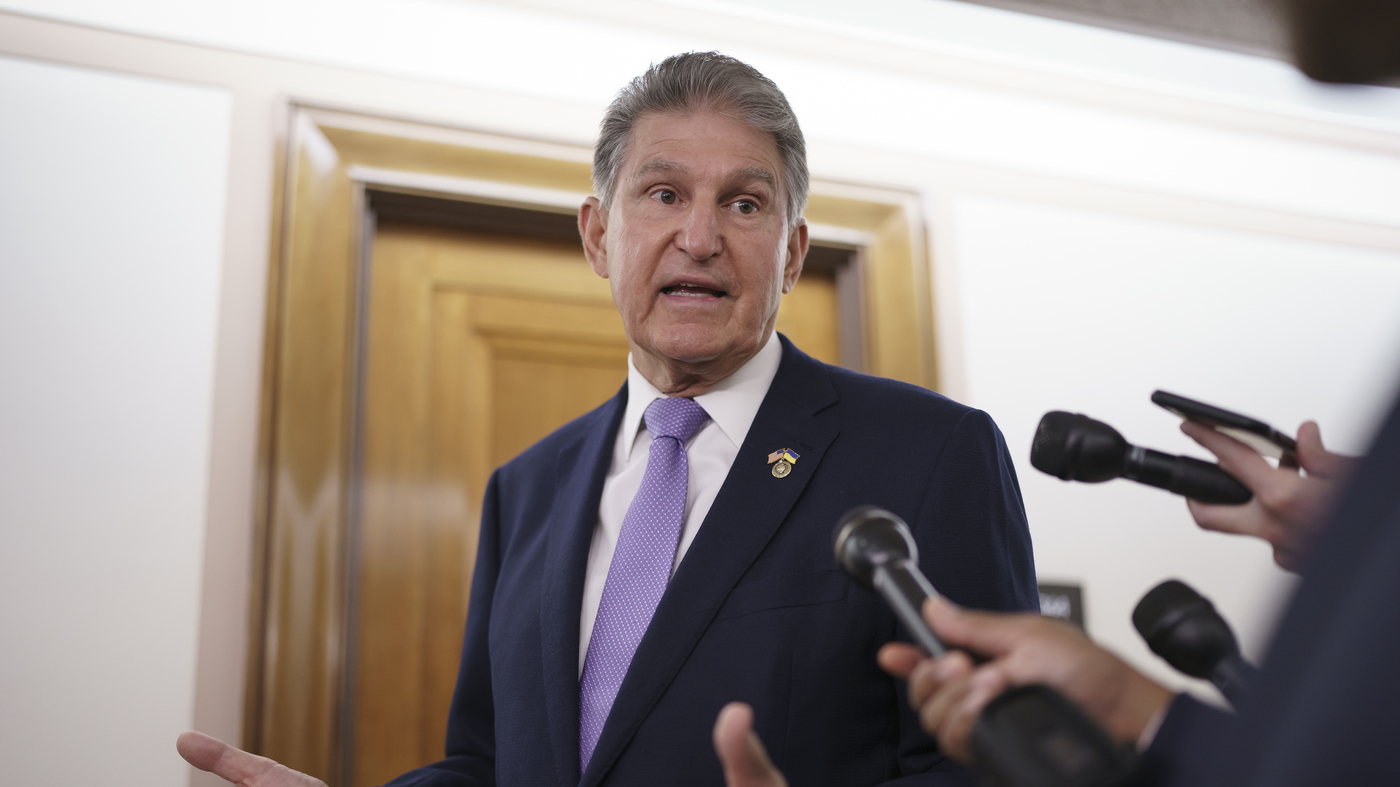 Sen. Joe Manchin, D-W.Va., is met by reporters outside the hearing room where he chairs the Senate Committee on Energy and Natural Resources, at the Capitol in Washington, D.C., last week.

Sen. Joe Manchin, D-W.Va., is met by reporters outside the hearing room where he chairs the Senate Committee on Energy and Natural Resources, at the Capitol in Washington, D.C., last week.

Now that Sen. Joe Manchin has pledged support for legislation that includes significant new funding to fight climate change, talk of President Biden declaring a climate emergency may be over.

In a dramatic reversal on Wednesday, Manchin, the West Virginia Democrat with a penchant for being spoiler to the president’s legislative agenda, suddenly announced his support for a pared-down version of Biden’s ambitious domestic agenda known as “Build Back Better.” Manchin said he’d agreed to cast a potentially decisive vote for the Inflation Reduction Act of 2022, which includes hundreds of billions earmarked for reducing carbon emissions and promoting clean energy.

Oregon Democratic Sen. Jeff Merkley, a leading proponent on climate change legislation, lauded the “$300 billion for clean energy investments,” in an email to NPR, calling it “a big deal.”

The president himself called it “the most important investment we’ve ever made in our energy security.”

To be sure, Manchin has backed out of talks before over an earlier, much more ambitious version of the president’s “Build Back Better” plan. And there are no guarantees until the latest bill is signed and delivered to Biden’s desk.

But assuming the latest deal holds together, the motivation for Biden declaring a climate emergency seems to have waned, says Richard Newell, the CEO of Resources for the Future, a nonprofit promoting climate action.

“It’s absolutely huge news,” he says about the breakthrough agreement. “It’s been a roller coaster ride, but the deal which seems to have been made does put the Biden administration’s climate goals within reach.”

An emergency declaration could have faced challenges

Forgoing the declaration of a climate emergency, with all the symbolic power it could add to tackling the problem, might seem like a loss for environmental activists. But in a practical sense, invoking the National Emergencies Act (NEA) of 1976 wouldn’t have given Biden all that much additional latitude and could have opened up his climate agenda to a legislative veto and judicial review.

“Depending on what you count, [there are] probably somewhere between a half dozen to a dozen or so laws that have provisions that might be useful for climate change,” says Daniel Farber, a law professor at the University of California, Berkeley. That’s among 136 powers allowed under the NEA, according to a Brennan Center for Justice study.

Michael Gerrard, a professor at Columbia Law School, says one such power is the Defense Production Act. In a hypothetical example, “if there’s a shortage of cadmium and it’s needed to make wind turbines and he says you have to send the scarce cadmium to these wind turbine manufacturers, he can do that kind of thing,” Gerrard says.

But other provisions, such as suspending oil and gas leases on federal property and restricting petroleum exports, are unlikely to be of much use given the current domestic political and geopolitical situation — namely Russia’s ongoing invasion of Ukraine, says Elizabeth Goitein, senior co-director, Liberty & National Security, at the Brennan Center.

“This is not going to happen,” Goitein says. In the event that Biden did declare a national emergency on climate, “he’s not going to do anything that restricts the production or consumption of fossil fuels.”

Even though invoking the NEA for climate change is a novel idea, Goitein says it’s one that would be “inappropriate” given the circumstances.

“The intent behind emergency powers is to give presidents short-term power in situations that Congress couldn’t have foreseen,” she says. “They’re not meant to address long-standing problems. … They’re certainly not meant to evade Congress when Congress has spoken on whatever action the president wants to take and has said that we will not support it.”

The 2019 border wall declaration teed up several court challenges and the issue finally found its way to the Supreme Court, which settled the matter in the Trump administration’s favor.

Such a declaration also must be renewed by the president annually, and any future administration could rescind it, or simply let it expire.

Separately, Goitein says, Congress is supposed to vote every six months on a joint resolution to terminate an emergency declaration under the NEA — a responsibility it has often shirked, but has taken up again in the current hyperpartisan environment.

“So, the White House would be buying itself a referendum every six months on climate change in Congress,” she says. “I doubt that’s a vote in the ‘pro’ column here.”

The limits of any president to unilaterally effect climate policy, too, have become all too evident in recent years, says Elisabeth Gilmore, an associate professor of environmental science and policy at Clark University.

“Moving from the Obama administration to the Trump administration, I think we had already seen the challenges of trying to move forward [on] a lot of policies, but also climate policy through executive orders alone.”

“Moving this type of action through Congress and the Senate is preferable,” Gilmore says. “So it certainly takes an immediate pressure off of needing to make this type of declaration.”