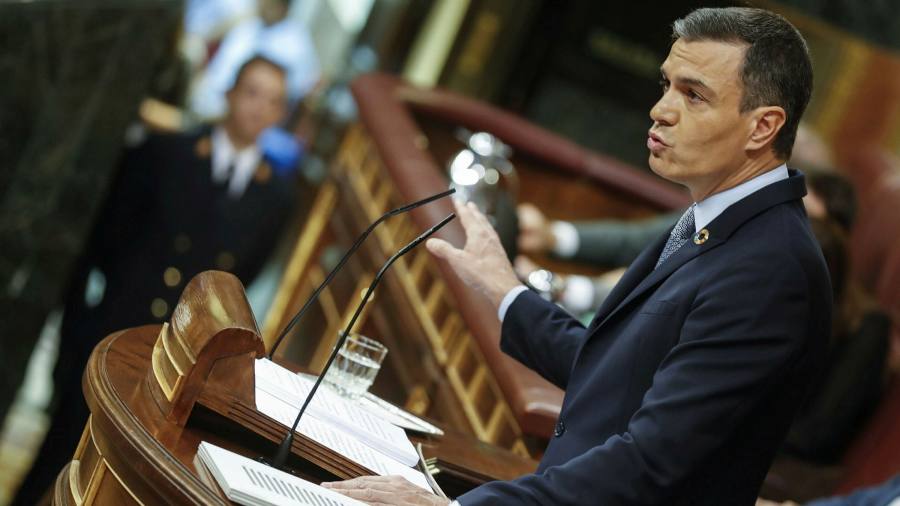 
Spain became the largest eurozone country to impose a windfall tax on banks in a sign of European governments’ search for funds to lessen the painful impact of price rises.

The move by Socialist prime minister Pedro Sánchez — which the government said was designed to limit banks’ gains from rising interest rates — triggered sharp falls in the stocks of Spanish banks.

Shares in Caixabank, Bankinter and Sabadell fell by about 10 per cent after the levy was announced while those of Santander and BBVA, the country’s two biggest banks by market cap, dropped by nearly 4 per cent.

The bank levy came without warning and drew strong criticism from analysts.

“This is a crude form of populism. The government argument is that banks are benefiting from rising interest rates,” said José Ramón Iturriaga, an analyst at Abante Asesores. “But there was no state compensation during the long period when rates were negative.”

Among other measures, the government plans to use the funds raised to build 12,000 homes in Madrid, make most state railway journeys free between September and December, and provide €2bn in scholarships for over-16s.

Sánchez, who leads a coalition government with radical left lawmakers, said a similar tax would be levied on energy utilities as part of the package aimed at protecting the less well-off from the impact of inflation and soaring energy prices.

“We are asking big companies to ensure that any exceptional benefits obtained during the current circumstances are channelled back to workers,” Sánchez said in the opening address of a three-day state-of-the-nation debate.

Sánchez’s move comes as his party seeks to regain the initiative in the face of a resurgent opposition Popular party.

The temporary taxes on banks and energy groups, which are to be applied in 2023 and 2024, are projected to raise a total of €7bn — €1.5bn a year from the financial sector and €2bn a year from utilities.

Windfall taxes on energy companies profiting from high oil and gas prices have been on the political agenda across Europe, but only a few countries have considered imposing new levies on banks in the wake of Russia’s invasion of Ukraine.

Hungary introduced a similar measure to Spain’s in May. In Poland, whose rightwing government introduced a tax on banking assets in 2016, the leader of the ruling Law and Justice party warned earlier this month that banks could be hit with a new windfall tax if they mistreated their customers.

The Spanish government did not explain how the new levies on banks and energy groups would be applied.

The share prices of utilities Iberdrola and Naturgy fell less than 1 per cent, suffering less than the banks because the government had previously indicated it would levy charges on energy companies.

In September, the government targeted €2.6bn in “excess profits” from utilities that do not use gas but benefit from rising gas prices. It later backtracked on the measure under pressure from energy groups.

The new taxes and other measures, Sánchez said, were designed to “protect workers and the most vulnerable”.

The prime minister’s popularity has been damaged by the rising cost of living, with the conservative People’s party overtaking his Socialists in national polls and winning a decisive victory in a regional election in Andalucía last month.

“I know it’s getting harder and harder to make ends meet,” Sánchez told parliament. “I understand the distress, the frustration and the anger because I share it.”