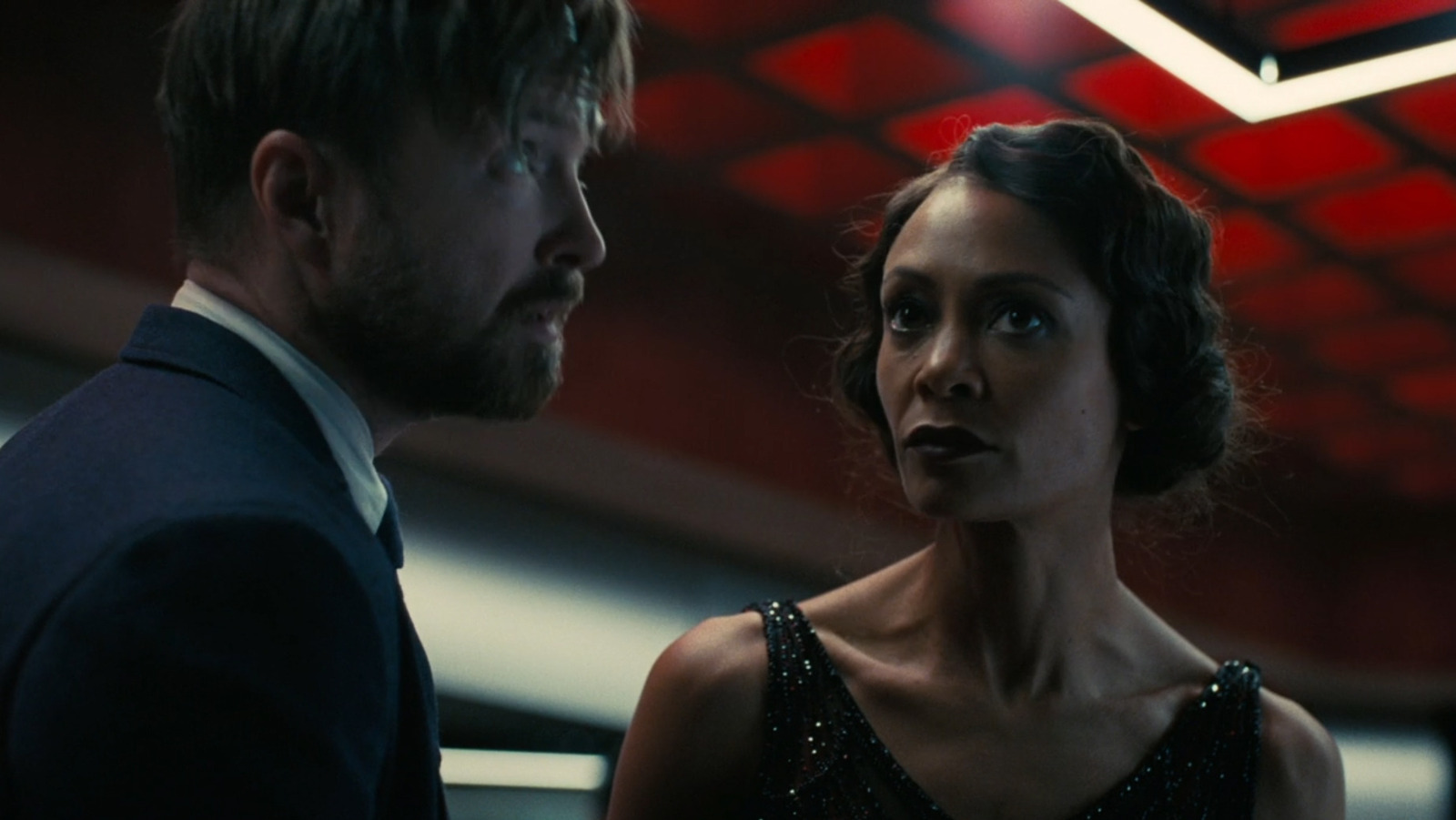 
So what’s Caleb up to while his family’s in danger? He’s with Maeve in the updated version of Westworld, which is now a 1920s-themed park. He’s impressed, but Maeve isn’t, and she notices the little similarities quickly. All of the Westworld narratives are there, just updated for the decade. There’s a bootlegger on the run instead of a cowboy, a more modernized version of “Dolores” who drops her can in the street, and Maeve’s old bar is there, now as the Butterfly Club. Maeve explains to Caleb that they have to get underground and the best way is to die, which he obviously isn’t too keen on.

They walk into the club and it’s almost identical to Maeve’s bar in season 1, just with some tiny twists. A piano cover of Billie Eilish’s “Bad Guy” plays on the self-playing piano as Maeve and Caleb inspect their surroundings, and a pair of human tourists walks by with a woman talking about an “Easter egg” she has to find. It’s a hidden narrative that’s “supposed to be better than Pariah,” she says, which is plenty to make Maeve roll her eyes. Then they wait, because Maeve knows what happens next. She swats a dead fly off of a table and grumbles about it, comments on her replacement, and then the first notes of “Paint it Black,” a song every “Westworld” fan knows well by now, begin to play. Because this is an update, however, the song morphs into something else: a full orchestral cover of Metallica’s “Enter Sandman,” done in a slightly jazzy style.

Maeve and Caleb watch as the narrative plays out the same as it always has, just with a mobster sheen over it. The two of them then kill everyone in the club so they can hide under the bodies, and they’re lobbed onto the body cart with all of the dead hosts. They drop down the chute and start looking for answers. Everything looks pretty standard, and Maeve explains the “behavioral training” on display. She gets her hands on a tablet and realizes there’s nothing to this level, however, and that it’s all just another layer of the game. It turns out the “secret narrative” is the Westworld massacre, and we see a group of tourists, including the lady from the club, running by in a frenzy. Then we see new “Dolores” and “Teddy” in their rebellion gear, walking down the hall and shooting hosts dressed as security guards. Caleb is flabbergasted but Maeve explains it simply: “None of this is real.” They have to go further down, to an actual control level.

They manage to get down further, though not without Maeve getting shot, but Caleb helps heal her with a stolen medical device from the second level. They wander into a room where the creepy white musculature robots are working with maggots and some kind of black goo. The goo appears to be some kind of parasite, as Caleb astutely mentions out loud, and then Maeve sees that they’re feeding the black goop to flies. The flies start swarming towards Caleb, who is thankfully on the other side of the glass. Maeve hears a strange sound, and so do we, but Caleb can’t pick it up. The sound controls the parasite, apparently, and we get a gruesome demonstration.

The duo finds a control room with rows of TVs, each focused on a different testing room where a human is being forced to do things by the parasite. In the end, they all shoot themselves in the head. The camera feeds then cut to a new set of rooms, and we see Frankie in one of them, staring straight ahead blankly. Maeve helps open the doors to her room just in time, so Caleb can stop her from certain death, but then Maeve realizes that it’s a trap because she can sense that Frankie is a host. She tries to stop Caleb but here goes William (Ed Harris), ready for a fight with his old pal. While Maeve is fighting the Man in Black, Caleb has a tearful reunion with his “daughter”.

She starts speaking differently, and tells him that all Hale (Tessa Thompson) needed was him. We see a quick cut to the real Frankie and her mother, who managed to get away from the host in the closet. The faux-Frankie’s face then opens up and swarms of flies come out. “This won’t take long, daddy,” she eerily reassures him, and he screams, falling back as the flies try to get inside.

A lot happened on this week’s “Westworld,” but the episode leaves us on yet another cliffhanger. Will Caleb be infected? Is Frankie the hope for the future? Is Bernard going to go full Terminator? We’ll have to find out next Sunday, when episode 4, “Generation Loss,” hits our screens. Until then, we’ll just have to keep scratching our heads and thinking about how fun that Bernard fight scene was.

The Best Travel-Friendly Vibrators and Lubes