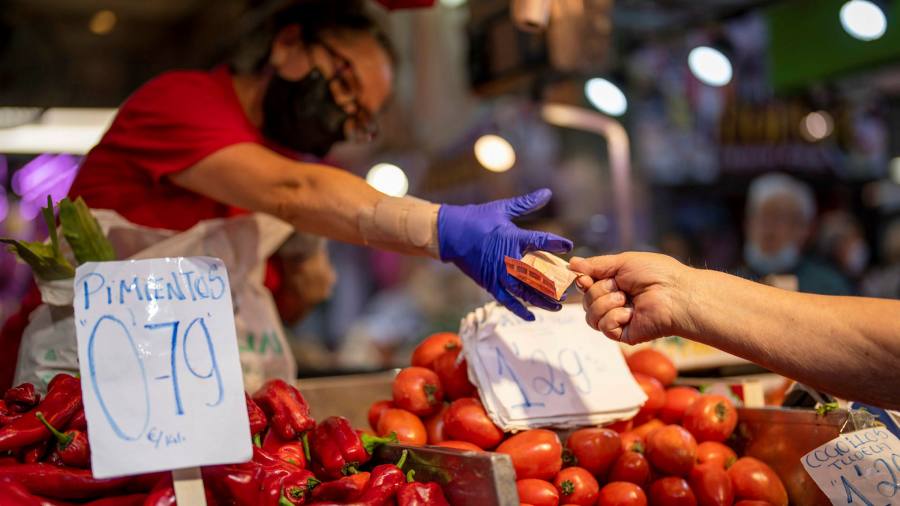 
Price growth in the eurozone hit a record high of 8.6 per cent in the year to June, intensifying tensions between rate-setters at the European Central Bank over the speed of its planned interest rate rises.

Eurozone inflation increased from 8.1 per cent in May, after a sharp acceleration of energy and food prices in many countries due to supply disruptions caused by Russia’s invasion of Ukraine. Rising price pressures in the bloc more than offset a slowdown in German inflation driven by transport and electricity subsidies to cushion the higher cost of living.

Economists polled by Reuters had expected eurozone inflation of 8.4 per cent. Claus Vistesen, an economist at Pantheon Macroeconomics, said the bigger than expected rise “increases the risk” that the ECB will raise rates by more than its planned quarter percentage point at its meeting in three weeks, adding the central bank was “miles behind the curve”.

ECB president Christine Lagarde said at the bank’s annual forum in Sintra, Portugal, this week that it would stick to its plan to begin raising interest rates with an increase of 25 basis points on July 21. She said a bigger move was likely in September, unless there is a swift slowdown in inflation.

The central bank is juggling a difficult balancing act between reversing almost a decade of ultra-loose money to rein in rampant price growth while trying to avoid dragging the region into a deep recession or another debt crisis after borrowing costs rose sharply in weaker countries such as Italy.

Fabio Panetta, the most dovish member of the ECB executive board, said in a speech on Friday that rate rises should be “gradual” because, unlike the US, high inflation “does not reflect excess demand in the euro area”.

“Consumption and investment remain below their pre-pandemic level and even further away from their pre-pandemic trend,” Panetta said. Once the ECB’s deposit rate rises from minus 0.5 per cent back above zero, any further moves “will depend on the evolution of the outlook for inflation and the economy”, he added.

However, some hawkish rate-setters on the ECB’s governing council — including several in the Baltics where inflation is highest — plan to push for a larger rate rise of 50bp in July because of their concerns that price pressures show few signs of easing.

Panetta also defended the ECB’s plan to contain unwarranted
divergence in eurozone government borrowing costs by buying the bonds of the most vulnerable countries with an “anti-fragmentation
instrument”. He said this would be in the interests of stronger
countries too, because without it they “would experience capital
inflows that would compress yields, resulting in financing conditions
that would be too loose and inflation that would be too high”.

FT survey: How are you handling higher inflation?

We are exploring the impact of rising living costs on people around the world and want to hear from readers about what you are doing to combat costs. Tell us via a short survey.

Unemployment in the 19 countries that share the euro fell to a record low of 6.6 per cent in May, which is likely to add upward pressure on wages.

Christoph Weil, an economist at Commerzbank, predicted eurozone inflation would be 7.5 per cent by the end of this year, well above the ECB’s 2 per cent target. “Unions will demand at least partial compensation for higher inflation in the upcoming wage negotiations,” he said.

Inflation rose in 17 of 19 eurozone countries in June, slowing only in Germany and the Netherlands, according to a flash estimate from Eurostat on Friday. It rose at double-digit rates in nine member states and was above 20 per cent in Estonia and Lithuania. The lowest inflation rates were in Malta and France at 6.1 and 6.5 per cent respectively.

Energy prices rose by an all-time high for the eurozone of almost 42 per cent in June after Russia reduced natural gas supplies to Europe. Food, alcohol and tobacco prices in the bloc were up 8.9 per cent, reflecting disruption to supplies of agricultural commodities caused by the Ukraine conflict.

“Even if demand comes down more drastically over the next few months, we think not all input costs have passed through the system yet,” said Marcus Widén, an economist at SEB.