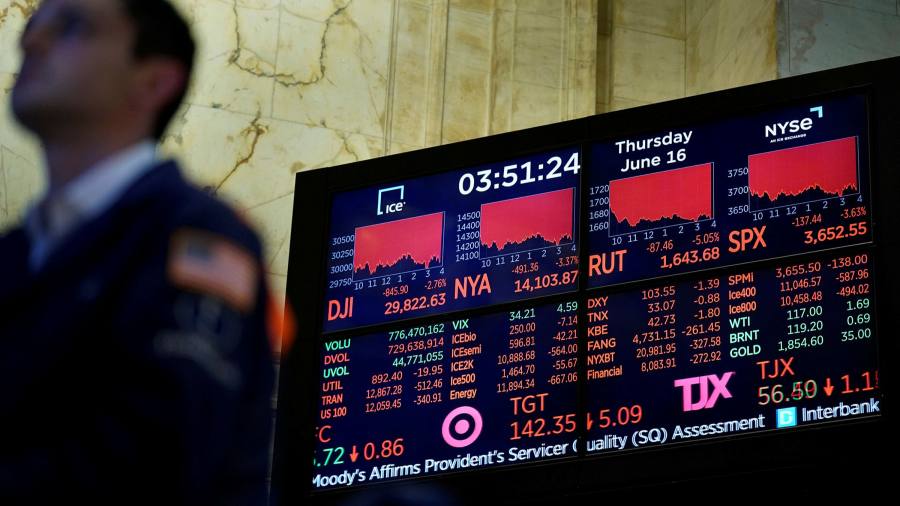 
US stocks have suffered their heaviest weekly fall since the outbreak of the coronavirus pandemic, after investors were spooked by a series of interest rate increases by big central banks and the threat of an ensuing economic slowdown.

The S&P 500 index ended the week 5.8 per cent lower, its worst weekly performance since March 2020. An 0.2 per cent uptick on Friday did little to offset damage done in earlier trading sessions.

The FTSE All-World index, a measure of emerging and developed markets, also dropped by the most since March 2020, down 5.6 per cent for the week.

The share declines are a sign of an increasingly gloomy global market outlook, as the Bank of England and the Swiss National Bank followed the Federal Reserve in raising interest rates this week in attempts to tackle soaring inflation.

“The more aggressive line by central banks adds to headwinds for both economic growth and equities,” said Mark Haefele, chief investment officer at UBS Global Wealth Management. “The risks of a recession are rising, while achieving a soft landing for the US economy appears increasingly challenging.”

The SNB on Thursday surprised markets with its first rate rise since the lead-up to the global financial crisis in 2007, lifting borrowing costs by half a percentage point after inflation in the country hit a 14-year high last month.

The BoE joined the trend hours later, with a 0.25 percentage point increase as it warned that UK inflation would climb above 11 per cent this year.

A day earlier, the Fed had lifted rates by 0.75 percentage points in its biggest such move since 1994. And in a monetary policy report released to Congress on Friday, the Fed said its “commitment to restoring price stability — which is necessary for sustaining a strong labour market — is unconditional”.

“The key turning point [for stocks] is going to be when the Fed has decided it has done its job on inflation, but there’s recognition that they’re a long way from getting there,” said Timothy Murray, a strategist on the multi-asset team at fund manager T Rowe Price, who noted they are keeping an “underweight” position in equities because of economic risks.

In Europe, the regional Stoxx 600 index closed 0.1 per cent higher, having lost 2.5 per cent in the previous session. For the week, it was down 4.6 per cent.

Some analysts believe the decline in European equities has bottomed out, with Bank of America upgrading its view of the Stoxx 600 from “negative” to “neutral” on the premise that a sharp drop since January’s all-time high has priced in the bad macroeconomic news it anticipates.

In government debt markets, the yield on the benchmark 10-year US Treasury note fell 0.4 percentage points to 3.23 per cent, after sharp swings in recent days as investors adjusted to expectations of higher interest rates and an end to the Fed’s bond-buying programme that pumped billions of dollars into the US economy. Bond yields fall as their prices rise.

The Fed’s aggressive rate rises have also hit corporate debt markets, with investors pulling $6.6bn out of funds that buy lower-quality, US high-yield bonds in the week to June 15.

Meanwhile, Italian bonds continued to rally after European Central Bank president Christine Lagarde told the bloc’s finance ministers that doubting the central bank’s commitment to fighting financial “fragmentation” of the region “would be a serious mistake”.

Italy’s debt has rebounded from a heavy sell-off after the ECB said at an unplanned meeting this week that it would speed up work on a new tool to counter surging borrowing costs in the euro bloc’s weaker economies. Italian 10-year bond yields fell 0.17 percentage points to 3.57 per cent on Friday, down from a high of 4.19 per cent earlier in the week.

Oil prices fell sharply on Friday over concerns that central banks’ actions could slow economic growth and squeeze crude demand. The price of Brent, the international oil benchmark, settled at $113.12 a barrel, down about 5.5 per cent on the day. It was the lowest close for Brent since May 20.

The move lower followed a strong increase in prices over the past six weeks, driven by persistent worries that economic sanctions on Russia over its war in Ukraine will tighten supplies in energy markets.

A Father’s Day Letter On Bitcoin