The WTO searches for some sorely-needed wins 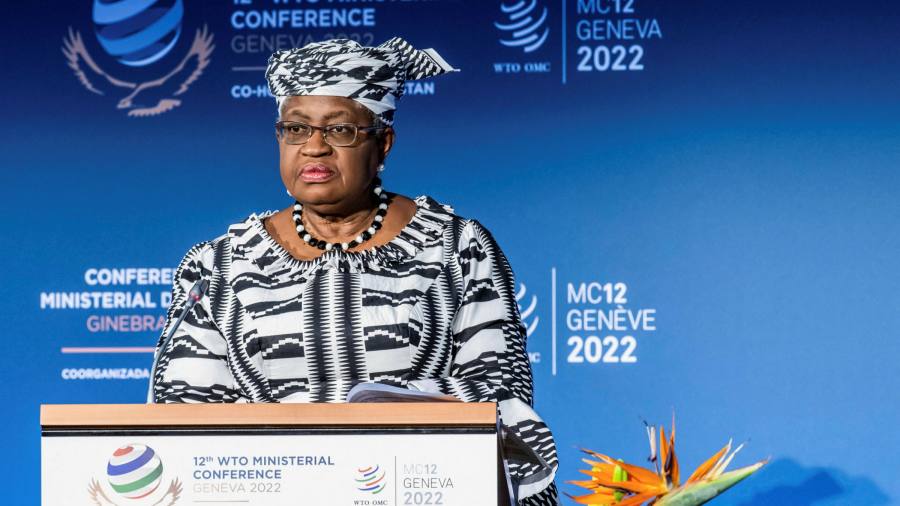 This article is an on-site version of our Trade Secrets newsletter. Sign up here to get the newsletter sent straight to your inbox every Monday

Hello and welcome to Trade Secrets as I return after a two-week break. By the time this lands with you I’ll be on my way to Geneva for the big set-piece World Trade Organization meeting of all ministers, the first since 2017, postponed for pandemic-related reasons from late November last year.

The meetings kicked off yesterday — there wasn’t a lot of news in the opening skirmishes — and will continue until the end of Wednesday unless everything is sorted by tomorrow (it won’t be). For a great overall view, see this by my colleague Andy Bounds.

For a means of judging what constitutes success, complete with handy scorecard, you’ll be needing this by Peter Ungphakorn and Robert Wolfe, veterans of the trade circuit.

Below I’m going to focus on the politics that are determining the big issues, including the intellectual property waiver (or non-waiver, as sceptics would put it) for Covid-19 vaccines, a deal on restricting fishing subsidies, a response to the global food crisis and reforming the WTO itself. Charted Waters is on trends in the global business education market.

As ever: thoughts, tips, insincere praise, finely-crafted insults, whatever you’ve got, send them along to alan.beattie@ft.com.

Get in touch. Email me at alan.beattie@ft.com

Operation Just Get Something Done is under way

When the WTO ministerial was put back from its original date in Geneva last November (actually its original date was in Kazakhstan in June 2020, also a victim of Covid), I wrote that a few governments were probably secretly happy that it had been pushed off. Chief among them was the US, which had politically trapped itself at home. Congress was opposed to any trade deal that meant making substantial concessions or handing more power to the WTO over US policy, but the administration had created a hostage to fortune by promising its vocal health campaigners a Covid patent waiver.

Even those governments keen for it to go ahead weren’t necessarily wanting a positive outcome. India in particular, apart from striking a maximalist pose on the IP waiver, was also demanding a lot of leeway to keep subsidising its fishing fleet. Quixotically, it also wanted the rest of the WTO membership to bless more use of trade-distorting handouts to farmers under the name of building public buffer stocks of food. And if those talks collapsed? Well, more kudos to Delhi for sticking it to the rich world.

A lot has happened in the world since then, notably the Ukraine war and an incipient global food crisis. You might have hoped that would have induced a general sense of unity and purpose. You’d be disappointed if you did.

On “Trips” (the agreement on trade-related aspects of intellectual property rights), the US remains in the same bind it was before, thanks to its inept domestic political management. It’s been taking part in a small core of discussions with a “Quad” (itself, EU, India and South Africa) in the WTO, but seemingly forgot to tell Congress what it was up to. When a draft of the discussions leaked, showing some pretty minimal tweaks along lines proposed by the EU, Congress was cross it hadn’t been consulted and the campaigners were furious their dreams hadn’t come true.

The almost-finished version of the text to be put to ministers this week remains, let’s say, somewhat minimal. If you think (many do not) that major holes need to punched in IP law to stimulate vaccines and other treatments for Covid and diseases yet to come, you won’t find them here.

Still, there have been some rare positive developments in other countries regarding prospects for a deal, even if a weak one. India, which doesn’t really have much of an interest in a waiver anyway (its world-class generic pharma companies have no difficulty producing and exporting) has so far gone along with the draft, apparently having been leaned on by South Africa and other developing countries that would find the proposal somewhat useful. A deal this week? Maybe. That would be a solid diplomatic success for the WTO DG, Ngozi Okonjo-Iweala, who opened proceedings with an eloquent plea for compromise and unity yesterday, whatever you think of the substance.

In other areas, the politics don’t seem to have improved. The US midterms now being that much closer, the Biden administration’s political room for manoeuvre has reduced yet further. It’s talked a good game on reforming the WTO but one pretty much devoid of substance, and certainly it doesn’t look like it will lift its block on the appellate body for the foreseeable.

India, although it has developed a taste for bilateral trade deals, doesn’t seem to have softened its intransigence at the WTO over fishery subsidies and farming. On agriculture, the existing issue of public food stocks and India’s recent abrupt export ban on wheat hasn’t increased the chances of a harmonious outcome.

There’s even a non-negligible chance that India, together with allies South Africa and Indonesia, will end a 24-year WTO moratorium on taxing cross-border electronic transmissions (software, data and so on). It would be an utterly baffling thing to do for an economy with a world-class digital sector, but there you are.

Overall, the political atmosphere among trade ministers has changed less than you might imagine as a result of the Ukraine war. There’s no repeat of the gush of global solidarity that followed the September 11 attacks (this is not an unalloyed negative, since said gush ended up wasting a decade of everyone’s time by inspiring the doomed Doha round of WTO talks). In any case, security and defence rather than trade are the first thoughts of many governments these days.

Ukraine may have brought the rich democracies and some like-minded countries closer together, but those governments’ ringing denunciations of Russia in the WTO (and even statements of support for Ukraine that don’t mention Russia by name) have drawn conspicuously few emerging market backers in Asia and Africa.

We’ve still got the same problems we did in November. The US is still terrified of allegedly trade-phobic voters at home: India still gets capital and leverage from broad-spectrum defiance at the WTO. Getting deals this week will require some nifty diplomacy. We’ll keep you informed.

As well as this newsletter, I write a Trade Secrets column for FT.com every Wednesday. Click here to read the latest, and visit ft.com/trade-secrets to see all my columns and previous newsletters too.

The provision and purchase of education, at least at the higher end, is a sophisticated globalised market. With the publication of the FT’s annual ranking of masters in finance (MiF) courses (something I have written about extensively as business education correspondent for the last seven years) I thought it was worth looking at a couple of trends here, using two charts.

Business education has been defined in recent years by escalating tuition fees and the rise of schools in the Asia-Pacific region to match those of the US and Europe. However, when it comes to MiF courses, it is students in Asia-Pacific countries that are most willing to travel elsewhere in the world to secure places on the world’s best degree programmes, and they are choosing European schools. One of the paradoxes, however, as the above chart by my FT colleagues Leo Cremonezi and Sam Stephens shows, is that alumni who moved regions for their programme earn a lower salary and pay higher tuition costs.

There is a benefit for students who come to study in Europe rather than the US however — as the above chart shows — with MiF students paying lower fees and receiving larger salaries than those studying in other regions. It is therefore unsurprising that this year’s FT ranking lists are dominated by the British and French schools. (Jonathan Moules)

Talking of food crises and export restrictions, here’s David Kleimann of the Bruegel think-tank pointing out the limitations of international rules in preventing export bans.

The longstanding fuel vs food debate about using crops to generate energy has started up again thanks to the Ukraine conflict.

Matthew Goodman at the think-tank CSIS argues that the US’s bitty transactional deals in Asia won’t impress its trading partners there.

Europe Express — Your essential guide to what matters in Europe today. Sign up here

The Bitcoin Law Announcement Was A Special Day In History