FirstFT: Opec set to accelerate oil production after US pressure 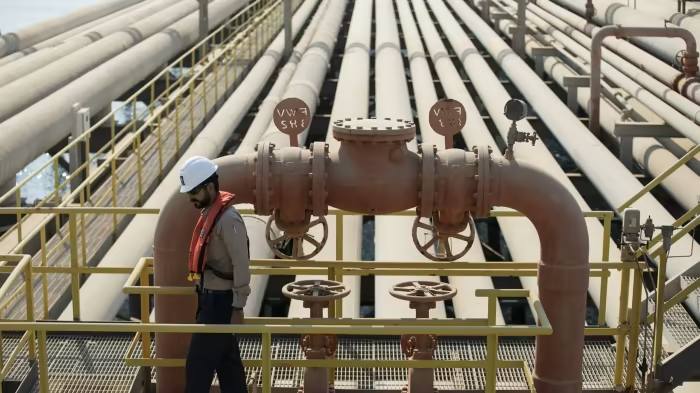 Opec and its allies have agreed to accelerate oil production in July and August, as the cartel’s linchpin Saudi Arabia bowed to US pressure to cool a crude price rally that has threatened to stall the global economy.

The cartel said it would increase output by almost 650,000 barrels a day in both months, up from planned increases of about 400,000 b/d. The move came days after the EU agreed to impose a partial ban on Russian oil imports, deepening fears of global energy shortages as Moscow’s invasion of Ukraine continues to rattle markets.

Saudi Arabia and the United Arab Emirates, Opec’s two powerhouse producers, are likely to account for most of the supply increases, with Riyadh earlier signalling it was prepared to increase output to overcome Russian shortages.

The extra supplies are the first time the Saudi-led Opec+ cartel has deviated from a measured supply policy agreed in the depths of the pandemic oil crash two years ago, and comes after months of high-level US diplomacy to repair relations between Riyadh and Washington.

But don’t expect fuel prices to go down anytime soon. Oil prices are only going one way after Europe’s import ban, writes FT’s Derek Brower in our Energy Source newsletter.

Thanks for reading FirstFT Asia. Share your feedback with us at firstft@ft.com. Have a great weekend — Emily

The latest from the war in Ukraine:

1. China claims Covid victory in Shanghai despite recession risks Beijing declared victory in defending Shanghai from the coronavirus pandemic, despite officials clamping down on office and residential complexes and whisking people to state quarantine facilities in the international finance hub.

2. Hedge funds turn more bearish on stocks Hedge funds are growing increasingly pessimistic about the outlook for global equities, even though markets have already sold off sharply since the start of 2022. High-growth technology shares are a particular area of concern for top-performing managers including Lansdowne Partners’ Peter Davies and BlackRock’s Alister Hibbert.

4. Taiwan’s opposition tries to claw back America’s trust On a 12-day tour that began yesterday, Kuomintang chair Eric Chu will seek to rebuild relations with Taiwan’s most crucial security partner, which his party has neglected for years as it battles to regain its standing following a series of crushing election defeats.

5. Biden to call for action on guns in primetime speech Joe Biden will use a rare primetime address to the American people today to push Congress to pass new gun control measures in the wake of a number of deadly mass shootings. His appeal comes on the heels of three high-profile deadly shooting rampages across the US in recent weeks.

Dragon Boat Festival The traditional Chinese holiday will be held today as it is on each year on the fifth day of the fifth month of the Chinese calendar.

US special envoy for North Korea visits Seoul Sung Kim is scheduled to meet his counterparts from Japan and South Korea in Seoul today to discuss how to deal with Pyongyang’s recent missile launches and the country’s Covid outbreak.

Anniversary of Tiananmen Square massacre Normally at this time of year, the city would be preparing to mark the anniversary of the Tiananmen Square crackdown on pro-democracy protesters that took place on June 4, 1989. But Beijing’s tightening control of the city means that, for a third year in a row, no significant commemorations are being planned.

Toshiba agrees ceasefire with investors but fight is far from over For four years, Toshiba has been at war with its investors in an acrimonious conflict that has smashed the decades-old conventions of corporate Japan. But now, after a bruising series of clashes and defeats for the company in shareholder votes, Toshiba is poised to make history once again — with a ceasefire.

Cloudy with chance of hurricanes for Wall Street, bankers say All of a sudden, everyone on Wall Street is talking about the weather. With the war in Ukraine and policy tightening by the US Federal Reserve making financial forecasting harder than unusual, JPMorgan Chase chief executive Jamie Dimon has focused attention on the heavens by employing meteorological metaphors to make sense of today’s economic turbulence.

How the Queen built her reign on duty and detachment While recent opinion polls have suggested that younger Britons are more ambivalent about the role of the royal family, the overall majority in favour of the institution has remained relatively steady throughout Queen Elizabeth II’s reign and was still buoyant on the eve of her Jubilee celebrations.

CBDCs now hold wholesale appeal for central bankers The terra and luna stablecoins collapse, and the tumbling price of tokens such as bitcoin, triggered establishment chatter about a “crypto winter”. What is sparking establishment interest, however, is using CBDC for wholesale cross-border payments, to move funds between financial institutions and central banks, writes Gillian Tett.

The global nursing crisis In 2020, the World Health Organization estimated there was a global shortage of 5.9mn nurses — almost one-quarter of the current workforce of almost 28mn. Covid-19 has made things worse, with many suffering burnout and mental health challenges as they struggled to deal with the chaos of successive waves of the virus.

TikTok clips seem an odd fit with the literary world. But publishers mindful of their bottom line would do well not to sniff at the recent BookTok trend.