2 doctors, a receptionist and a visitor were killed in the Tulsa shooting : NPR 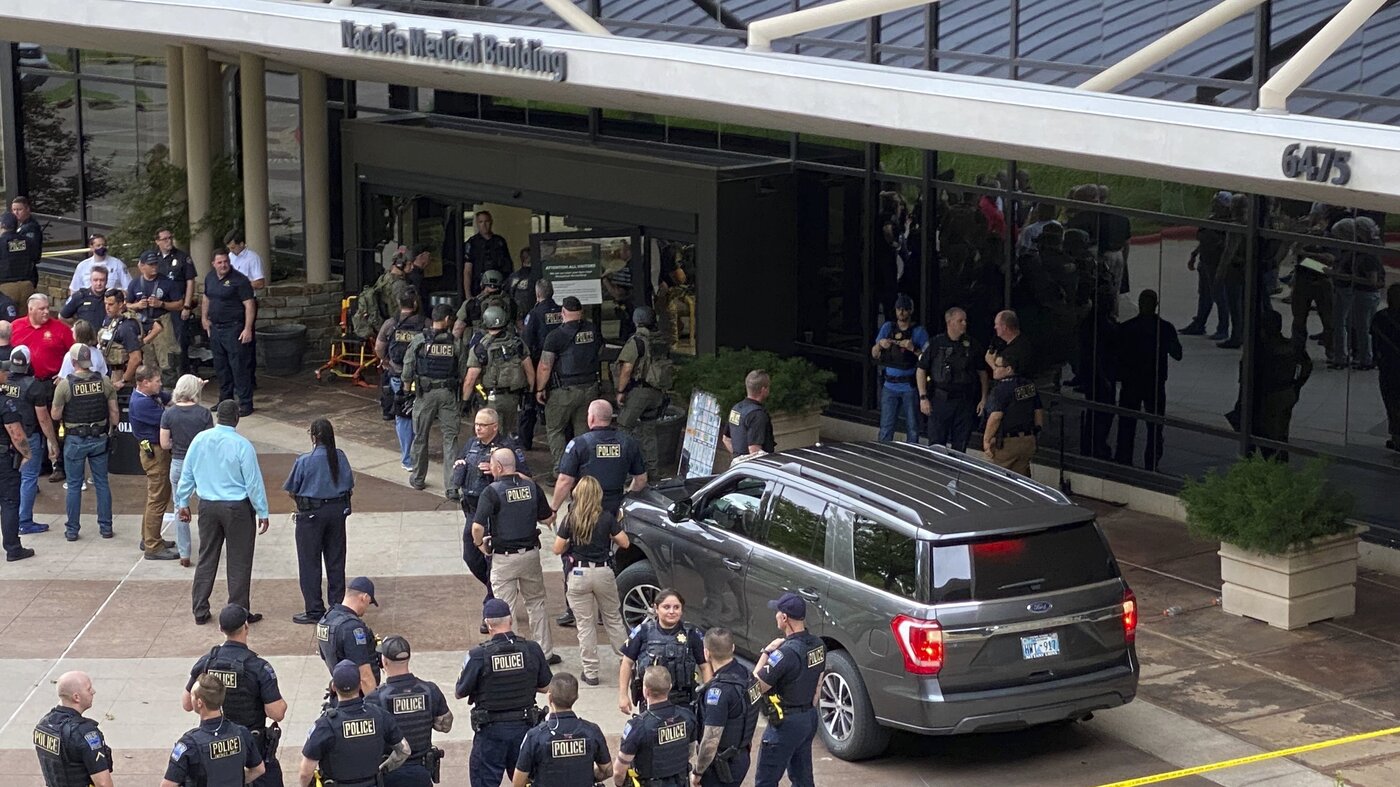 Emergency personnel respond to a shooting at the Natalie Medical Building on Wednesday in Tulsa, Okla.

Emergency personnel respond to a shooting at the Natalie Medical Building on Wednesday in Tulsa, Okla.

Two doctors, a receptionist and a former soldier accompanying his wife during a checkup were killed in a mass shooting inside a Tulsa medical building, authorities said Thursday.

Police, officials at Saint Francis Health System and others provided details about the victims of Wednesday’s shooting.

One of the doctors once worked for a pro basketball team, and the other was a huge college football fan. The receptionist supervisor cheered on her sons’ high school baseball team, and police said the fourth victim was an Army veteran who sacrificed his life for his wife during the shooting.

Tulsa Police Chief Wendell Franklin said Phillips performed back surgery on the gunman last month and was the primary target of the shooting. Phillips, 59, was found dead in a second-floor exam room.

Phillips was an orthopedic surgeon with an interest in spinal surgery and joint reconstruction, according to a profile on the hospital system’s website. He had served as lead physician for Tulsa’s WNBA team before the franchise moved out of state, according to the Tulsa World.

In addition to his medical degree, Phillips had advanced degrees in organic chemistry, pharmacology and theology.

“He was — he is — a man that we should all strive to emulate,” Robertson said. “The fact that some individual would go after Dr. Phillips is mind-blowing. He’s one of those folks that, you know, his clinic can not always be on time because he will spend every minute with patients that they need.”

Phillips graduated in 1990 from Harvard Medical School and completed his fellowship at the university-affiliated Beth Israel Deaconess Medical Center in Boston.

“Tragically, this incident is the latest in a seemingly unending series of devastating shootings that serve as painful and recurring reminders that gun violence is a medical and public health crisis in this country,” Harvard Medical School Dean George Q. Daley said Thursday in a statement.

In a statement, the J. Robert Gladden Orthopaedic Society said Phillips was one of its members. The Towson, Maryland-based group said its mission is to increase diversity within the orthopedic profession “and promote the highest quality musculoskeletal care for all people.”

The group called the shooting a “despicable act.”

According to the hospital system’s website, Husen, 48, focused on sports medicine. She graduated medical school in 2000 from Oklahoma State University and further trained at Greenville Memorial Hospital and the Steadman Hawkins Clinic of the Carolinas in South Carolina.

Husen’s ex-husband, John Reckenbeil, said Husen was a physical therapist when she broke her foot in a car accident in the late 1990s. As she was rehabilitating her injury, Husen made the decision to go to medical school and study orthopedics, Reckenbeil told The Associated Press.

Husen, who had two brothers, loved her family and enjoyed being a doctor, Reckenbeil said.

“That’s what is just so unacceptable,” Reckenbeil said. “She’s there doing her job … She loved helping people and she’s ripped from this planet doing what she loved to do.”

Husen grew up in Ponca City, Oklahoma, and was a big fan of Oklahoma Sooners football, Reckenbeil said.

Husen was cleaning out her house recently and sent him photos from their wedding of his late mother “out of the blue,” Reckenbeil said.

“That’s the type of woman she was,” Reckenbeil said.

Reckenbeil said Husen was often “the smartest person in the room, but she never let you know about it.”

Robertson said Glenn, 40, was a receptionist and served in a supervisory role.

The three employees were “the three best people in the entire world, the most committed to doing what they do every day and taking care of others. They didn’t deserve to die like that,” Robertson said.

The Charles Page High School baseball team said in a Facebook post that Glenn was a devoted wife, mother and friend.

“She was on our Booster Club Board and served the baseball boys and coaches selflessly. She was the biggest cheerleader for both of her sons and all of our boys!” the statement said. “Our baseball family is at a loss.”

Franklin, the police chief, said Love, 73, was found wounded in a second-floor exam room and taken to the hospital’s emergency room for treatment. He died there.

Although Love was a patient at the clinic where the shooting happened, he didn’t have an appointment that day but was instead accompanying another patient, said Tulsa Police Capt. Richard Meulenberg.

Love was a retired Army sergeant with 27 years of service, including one tour in the Vietnam War, the Tulsa Police Department said in a statement posted on Facebook. Love enjoyed traveling and spending time with his family, which included eight grandchildren and six great grandchildren.

Love had taken his wife, Deborah, to the clinic the day of the shooting for her six-month checkup, said their daughter, Karen Denise Love. Deborah Love had back surgery in December.

They were in an examination room with one of Phillips’ assistants when the couple heard the commotion outside. When they realized it was gunshots, Karen Love said her father grabbed the door handle from inside the room.

“As they heard this guy going up and down the hall, they knew it was gunfire,” Karen Love said. “They thought it was someone just shooting people. My dad was trying to hold the door the best he could.”

The shooter walked past their room, but they heard him come back. He then started shooting through the sheetrock walls and through the door, striking William Love, she said.

Karen Love said her father was born in Georgia, a “poor, sharecroppers’ boy.”

Before he was killed, Love had planned to travel with his wife, his daughter said. They enjoyed California, Wyoming and Georgia, Karen Love said.

How to Exfoliate Even Really Sensitive Skin