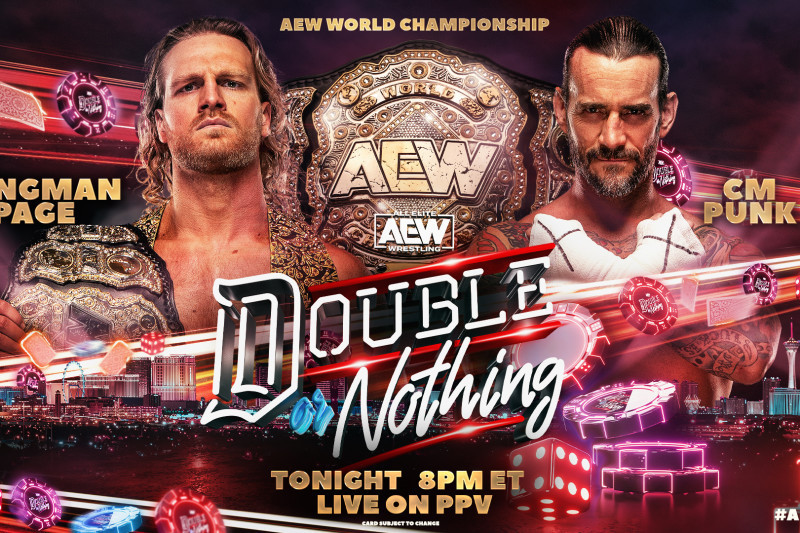 Less than a year ago, the thought of CM Punk standing as a pro wrestling promotion’s top champion was baffling—now he’s the AEW World Champion and fans are headed for the next Summer of Punk.

Sunday night at AEW’s 2022 Double or Nothing, Punk got the best of champion “Hangman” Adam Page to close the show in an instant classic that featured not only some brilliant storytelling that avoided heel turns, but some of the most important historical landmarks in modern wrestling history.

Punk, after all, was going on a near-decade hiatus from pro wrestling after his ugly split with WWE. That ended during his big return last August, and though he started slow while working with up-and-coming Superstars, it was only a matter of time before he contended for the promotion’s top title.

By the end of the night on Sunday, Punk was overcome with emotion after being announced as the winner, capping off a stunning resume:

And it sure feels like we’re just getting started.

In a major way, thank the booking. This hardly has to mean the end of the Punk vs. Page saga. Perhaps if fans are lucky, it’s only just getting started.

But even if the Superstars go their own separate ways, AEW’s call to not roll out a major heel turn for shock value is actually the best decision possible. The match sure hinted at chances for both. Punk avoided resorting to dastardly means to get a win on one of the biggest stages of his storied career, so there’s no asterisk on it in the history books. He now gets to be the brand ambassador while welcoming babyface and heel challengers alike.

And Page, frankly, is perhaps the best long-term booked Superstar of his generation, if not longer. What started as a journey as an underdog home-grown talent hoping to make it big, only to be cut down and take a windy course to the very top over the course of multiple years, has hit another stunning development.

Page’s conscience got the best of him.

With the referee down, he could have ended a slugfest where no one man truly had an advantage by using his title as a weapon. He chose not to, threw it aside, got countered and lost said title. Nobody could complain if this was his “Joker” moment and breaks bad again, or if he doubles down and perseveres.

A disclaimer—both of these get a for now designation, of course. Page going heel would be understandable. Punk is one of the best of the modern era at doing it and it only feels like a matter of time.

The Summer of Punk has officially begun 😤 @CMPunk is your AEW World Champion #ANDNEW #AEWDoN https://t.co/4e294kbwzl

Either way, another summer of Punk, once thought an impossibility reserved for the fantasy-bookers only, is here. And he’ll be the center of every broadcast in the way Jon Moxley or Chris Jericho was, as opposed to Page’s more reserved run where the rest of the roster seemed to shine brighter often.

Given the lack of a heel turn, there’s no expectation that Punk will ultimately lose to a Superstar who must be the next guy, either. He can have new, fun feuds, sure, but some of the old matchups he’s already had against the likes of Darby Allin, MJF, Eddie Kingston and especially Wardlow can now unfold in a fresh light.

Interestingly, speaking of the match quality itself, even Punk’s botches on buckshot lariats told a captivating story of a modern, albeit aging legend trying to show he can run with the next generation. An unintentional thing (during a main event taking place well after midnight on the east coast, no less), but something Punk and his future opponents can surely weave expertly into storylines. Who doesn’t want to root for the grizzled, graying veteran who really earns those “you still got it” chants?

Not that the horse needs hit much more, but this main event was another good example of where AEW just blows most other competitors out of the water. Yes, there were “steal the opponent’s finisher” spots that often feel cliche. But the above meant they had more meaning than usual. And the good guy being conflicted about brutalizing an opponent with a weapon to get a win has quite a bit more weight behind it when the Superstar doing it has literal years and years of complex character development that gets tested in that single moment.

In short, there’s a reason the crowd at the very end of a very long pay-per-view was as red hot as viewers will see—and seemingly split right down the middle during a match with no true villain.

It’s also worth noting this is a critical juncture for AEW, which makes the Punk win and hitting the brakes on a heel turn noteworthy. The company just lost Cody Rhodes. There’s the MJF drama. The main-event scene needs to stabilize a bit. If there’s a guy to head all this up—never mind clash with a certain three-lettered competitor a bit over the summer—it’s undoubtedly Punk.

Most fans familiar with Punk know another Summer of Punk is near-guaranteed to be a banger. But with this sort of careful passion for the craft flanking him, highlighted by Page, it has a real shot to be the best rendition yet.

Given Punk’s historical resume and fan expectations surrounding his return to pro wrestling at all, that’s saying something.

Why the cryptocurrency price collapse offers hope for slowing climate

Oil breaches $120 a barrel as gasoline and diesel prices soar