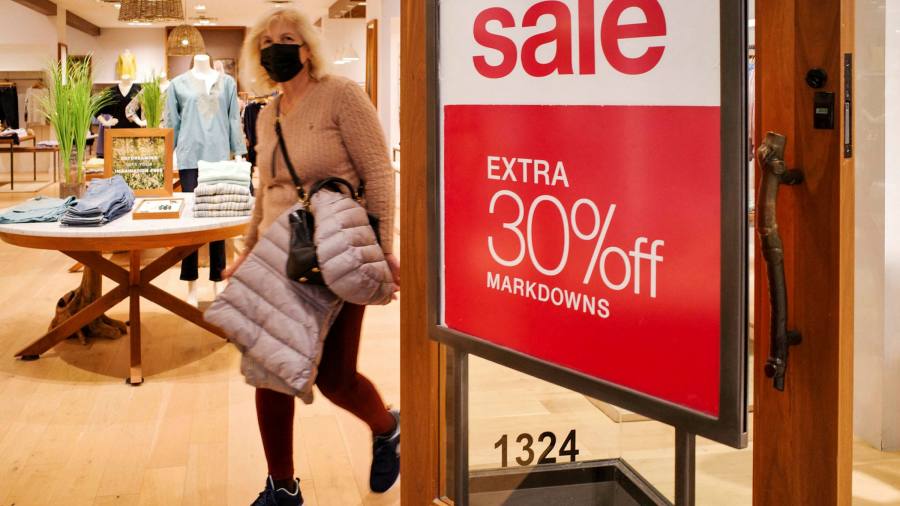 
Brieana LaCaze had 30 days to hire a dozen employees after she bought a women’s clothing boutique in the Galleria Dallas mall last month. She found only six.

“We hit a bump in the road,” the Texas businesswoman said. “Operations work now falls on me.”

Her predicament is common one for American store owners. As the unemployment rate drops back to extreme lows, no sector has struggled more than retailers to fill jobs. Retailers posted 155,000 new positions in March, bringing their total number of openings to 1.3mn, according to data released on Tuesday.

Retailers’ labour troubles are one factor behind rising prices in the checkout line, which along with food, energy, housing and other essentials have helped push US inflation up 8.5 per cent annually, the fastest rate of increase in 40 years.

The sector experienced sharp sales growth in 2021 as the economy rebounded from the coronavirus pandemic, and retailers expect demand to remain elevated in 2022. Business owners including LaCaze say that a tight labour market is making it increasingly difficult to keep up.

Wages in retail trade rose by 4.9 per cent year on year in April, the payrolls report said, less than the 5.5 per cent jump for average the US private sector worker. Retail workers on average earned about $684 a week, compared to a private sector average of more than $1,100.

Fears that a hot labour market, and the higher wages that come with it, will exacerbate the acute inflation problem has the Federal Reserve poised to rapidly tighten monetary policy in the coming months. The concern is a potential “wage-price spiral” in which workers demand higher pay in order to keep up with higher consumer prices.

“We can’t allow a wage-price spiral to happen, and we can’t allow inflation expectations to become unanchored,” Fed chair Jay Powell said on Wednesday, though noted that this dynamic has not taken hold so far.

“It’s a good time to be a worker looking to either change jobs or get a wage increase in your current job,” he added after the central bank raised interest rates by half a percentage point and signalled more such moves to come this year. According to estimates, there were roughly 1.9 job openings for every unemployed person as of March.

Walmart raised hourly pay twice in 2021, bringing the average wage for its 1.4mn workers to $16.40 an hour. Target has raised wages even higher and in March said it would spend $300mn to boost pay and benefits for its 409,000 employees, with starting wages at between $15 and $24 an hour based on location.

Employers have also embraced creative ways to draw in new employees. Home Depot announced that it would start making job offers the day after interviews. Walmart, Target and Amazon have all introduced tuition benefits for hourly employees.

Reynolds wants to open 75 new locations across the country by the end of the year. But without more staff, not all of those locations are the chain’s typical full-service washes. Some more closely resemble express car washes, where customers pull up to a gate and use an automated machine to select a service with minimal help from workers.

“It helps us adapt in a market where we aren’t able to find people,” Reynolds said.

LaCaze, the Dallas boutique owner, cut the interview for new roles at her boutiques to just three questions and structured a training program that will allow her to get new employees, called “stylists”, on the sales floor in less than a week.

Hiring incentives have lured many employees away from their old jobs, helping to push the number of those who voluntarily quit to a record-high 4.5mn in March. Stores have also become recruiting grounds for businesses in other, sometimes higher-paying industries, said Mark Mathews, a vice-president at the National Retail Federation.

Retailers now receive fewer applications for each role they post, according to talent acquisition firm iCIMS, which has worked with Chipotle, Dollar General and Foot Locker. Employers received an average of 17.8 applicants for each opening in March, down 19 per cent from the 22 they received in January 2021.

“From a worker’s point of view, this is something to celebrate,” says Nick Bunker, an economist for jobs site Indeed, who said that workers in retail, restaurants and other traditionally low-wage industries have benefited the most from the strong labour market.

Retailers answered surging demand during the pandemic in part by expanding in ecommerce. There are now signs that growth is levelling off: Amazon, the online retail giant, said last month that its aggressive push to expand had left it overstaffed and with surplus capacity.

Reynolds said that business owners like him were not expecting hiring to get easier anytime soon.

“Our jobs have a lack of flexibility in some ways,” he said. “You cannot wash cars through a Zoom call. So we have to make up for it in other ways.”

How Banks Try To Discredit Bitcoin