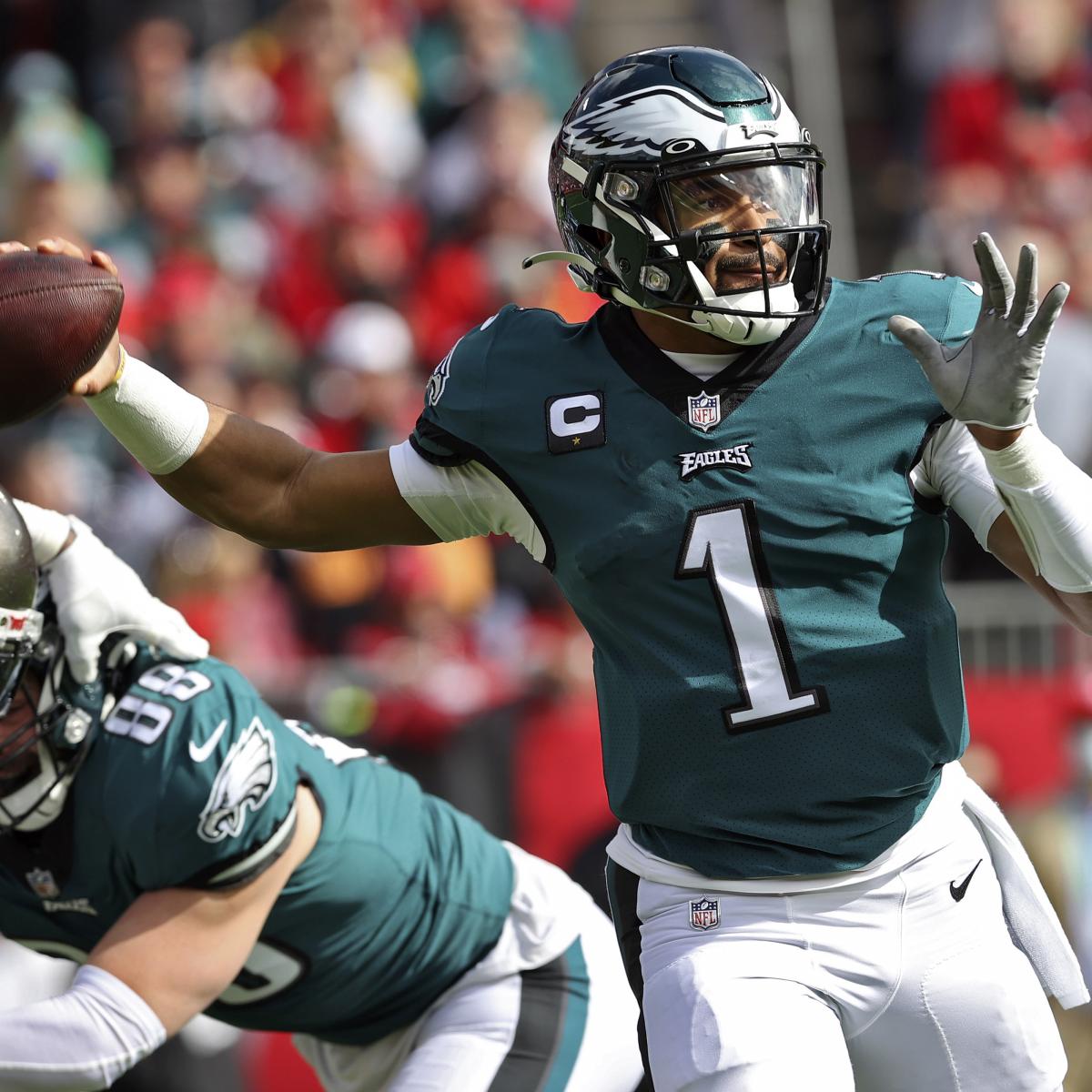 The 2022 NFL draft took place last weekend, and while there were plenty of news-making picks, the biggest impact move of all entailed a veteran player changing teams.

The trade that sent A.J. Brown to the Philadelphia Eagles made him the latest big-name pass-catcher to move franchises and sign a massive contract. It gave the Eagles offense a major boost as they attempt to keep pace with (or surpass) the Dallas Cowboys in the NFC East.

And it cranked up the pressure on third-year quarterback Jalen Hurts to take a big leap as a passer and lead the Eagles not only to the postseason but also on a long run once they get there.

There had been speculation for some time that in an offseason when star receivers such as Davante Adams and Tyreek Hill were already moved that Brown (who was looking for a big payday heading into his fourth season) could be dealt. And as Thursday’s first round moved along, the deal was struck—for the 18th pick and a third-rounder, Tennessee sent Brown to the Eagles. Philadelphia then gave Brown his payday: $100 million over four years with $57.2 million guaranteed.

It was a blockbuster that put smiles on faces all over the City of Brotherly Love. Per ESPN’s Tim McManus, head coach Nick Sirianni lauded the impact that Brown will have on the Eagles offense.

“We’re really excited to have [Brown] on this team,” Sirianni said. “He’s a strong man, he’s quick for a big guy and he catches everything. There is no projection. You’ve seen him do it in the NFL for three years now.”

General manager Howie Roseman echoed those sentiments: “Really excited to get him just in terms of how [Sirianni] can use him and his vision for A.J. Brown in this offense and how he complements the other guys that we have here. As you guys may or may not know, his relationship with our quarterback—all exciting things. Looking forward to getting him into Philadelphia.”

That relationship Roseman mentioned dates to 2016, when Brown and Hurts were both recruited by Alabama. Hurts chose the Crimson Tide before eventually transferring to Oklahoma. Brown went to Ole Miss.

Now the duo will play together for the first time, and as Hurts told Josh Tolentino of the Philadelphia Inquirer, he can’t wait to get out on the field with his new No. 1 receiver.

“He’s always been an excellent player since I’ve known him [before] college,” Hurts said. “He’s always had the ability to make plays with the ball in his hand, use his body, box out defenders, break tackles. He’s a great addition to a great receiver room we have now, and I’m excited.”

DeVonta Smith, who led the Eagles in receptions (64) and receiving yards (916) last year as a rookie, said he can’t wait to learn from Brown, who eclipsed 1,000 receiving yards in each of his first two professional seasons.

“I’m excited, just to learn from a guy like him,” Smith told reporters. “Anytime you play football, you watch all the different receivers, just seeing what everybody has in their toolbox. So him being here, just being able to learn from him [is helpful].”

The honeymoon is in full effect.

That Brown adds a new dynamic to the Eagles offense is undeniable. At 226 pounds, he weighs over 50 pounds more than Smith. The latter did what he could for a team that went 9-8 and squeaked into the playoffs in Sirianni’s first season, but the depth chart at wide receiver fell off a cliff after him.

Teams will face quite the predicament now. Double Brown, and Smith can use his speed and quickness to wreak havoc against single coverage. Flip the script, and Brown does the same with his size and speed.

Add a very good pass-catching tight end in Dallas Goedert to the mix, and Hurts suddenly has an impressive array of passing-game weaponry. One of the team’s weaknesses has become a strength.

The question is whether Hurts can take advantage of it.

The cold, hard truth is that Hurts’ legs have been a bigger threat to opposing defenses over his first two seasons than his right arm. His completion percentage climbed considerably last year, but he’s still under 60 percent in that category for his career. In 15 starts in 2021, he threw just 16 touchdown passes. There have been missed reads. Inaccurate passes. And a general inability to throw the ball vertically with any consistency.

Even Hurts admitted to reporters that his consistency needs to improve in 2022.

“That’s my whole entire approach going into Year 3 for me,” Hurts said. “Consistency in this league is everything. Ultimately, the work is being put in now, but that’s what I’m chasing.”

As The Athletic’s Zach Berman reported, for now at least, Hurts has the confidence of the only person whose opinion really matters—Eagles owner Jeffrey Lurie:

“I think what you do know is you have a guy that is incredibly dedicated, (an) excellent leader of men. Players around him gravitate toward him. He will do anything and everything to get better and work on every weakness he has and try to maximize every strength that he has. That’s why we’re committed to Jalen at age 23.”

That commitment isn’t exactly ironclad. The Eagles didn’t draft a quarterback, but no one really expected them to, especially given the perceived weakness of the class at the position. What the Eagles did do (according to reports) was make an offer for Russell Wilson. And kick the tires on a trade for Deshaun Watson…hard.

Those deals didn’t happen, but while acquiring Brown is (on paper) a big boost for the Eagles offense, it doesn’t help Hurts’ job security. In fact, the increased expectations that come with his arrival Hurt(s) it.

OK, that was bad. “Pun”ishable even.

There are exactly zero excuses left for Hurts. He has already shrugged off February ankle surgery and proclaimed himself ready for OTAs. The Brown trade emphatically erases any questions about the wideout room. Philly’s running backs aren’t Cleveland‘s, but no team in the league averaged more yards per game on the ground in 2021. The team’s offensive line ranked inside the top five last season, according to Pro Football Focus.

Defensively, the Eagles fielded a top-10 unit last year in terms of yards per game allowed and drafted a pair of potential immediate starters in defensive tackle Jordan Davis and linebacker Nakobe Dean. On paper (there’s that phrase again), these Eagles look every bit as formidable as the Cowboys. Maybe better. There’s already chatter that the Eagles (and not Dallas) are the best team in the NFC East.

But as ESPN’s Marcus Spears said on Get Up (via Kevin Manahan of NJ.com), if Hurts doesn’t get better in 2022, it’s all going to be for naught:

“If you think about the move for A.J. Brown and DeVonta (Smith) being drafted last year, Jalen Hurts is in a year like (Dolphins quarterback) Tua Tagovailoa. Both of those guys are in identical years when you start talking about what their teams have done to set them up for success. There is no better way to set a quarterback up than to go get a guy like A.J. Brown … (but) Jalen Hurts is in a year where he’s going to have to prove it.”

Now, it’s possible that Hurts will improve. That he’ll make the most of Brown’s arrival. Make better reads. He doesn’t have to be perfect. He just has to be more consistent as a thrower for the Eagles to win the division. Make some hay after.

But while there’s a big opportunity here, there’s big-time pressure too. If the Eagles start slowly, it won’t take long for the phone banks on sports talk shows in Philly to light up. If the Hurts we saw face-plant in his first postseason start (or anything close to him) shows up in September, things will get ugly…quick.

We’ve actually already seen this movie, or at least a variation of it. After the Eagles started last season 2-5, there were all kinds of calls for Sirianni to bench Hurts.

If the 2022 season starts with anything but wins after the trade for Brown, it won’t take seven weeks for those calls to ramp back up.

The untold story of their creation

2022 Men’s World Cup: Winners and Losers of the Group…