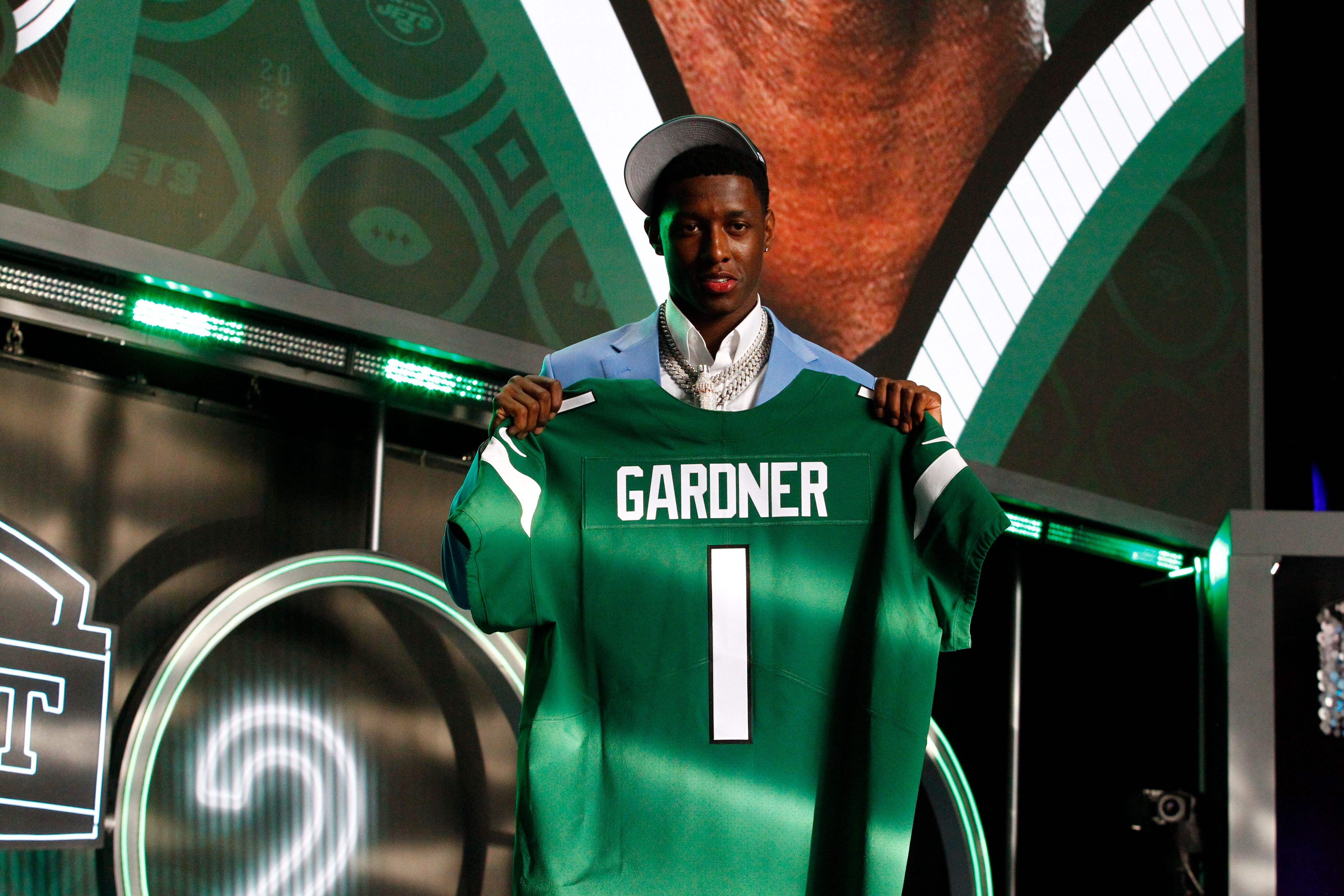 Add Mel Kiper Jr. to the chorus of people praising what the New York Jets did in the first round of the 2022 NFL draft.

ESPN’s draft guru released his list of winners after the first 32 picks were made on Thursday night, headlined by the Jets getting Ahmad “Sauce” Gardner (No. 4), Garrett Wilson (No. 10) and Jermaine Johnson II (No. 26).

“I’m a big fan of these three picks,” Kiper wrote about New York’s first-round moves. “The Jets got my top-ranked corner and top-ranked wide receiver in the top 10, and then they got a potential steal late in the night in Johnson.”

The Jets didn’t have to make a move to get either Gardner or Wilson. As more picks kept coming off the board without Johnson’s name being called, New York general manager Joe Douglas sent three picks to the Tennessee Titans to select the Florida State defensive end at No. 26 overall.

Kiper had Johnson ranked as the No. 11 overall player in this class on his final big board.

Even after making that trade, the Jets still have the sixth pick in the second round (No. 38) to add another high-level player.

You could argue that the Jets got the best players in this draft class at three of the four most important positions in the game.

It was a great night for New York football teams in general. The Giants also made Kiper’s list of winners after getting Kayvon Thibodeaux at No. 5 and Evan Neal at No. 7 to fill two of their biggest needs.

The Saints and Ravens took two different approaches to the first round. New Orleans was aggressive leading up to the draft by trading five picks, including No. 18 this year and a 2023 first-rounder, to the Philadelphia Eagles for pick Nos. 16 and 19 this year.

New Orleans general manager Mickey Loomis made another deal during the draft, sending pick Nos. 16, 98 and 120 to the Washington Commanders, to move up to No. 11 and take Olave.

Penning was selected with the No. 19 pick to replace Terron Armstead, who signed with the Miami Dolphins in free agency, as the Saints starting left tackle.

The Ravens sat at No. 14 and let Hamilton, who was the fourth-ranked player on Kiper’s big board, fall into their lap. They were able to get a starting center by trading Marquise Brown and the No. 100 overall pick to the Arizona Cardinals for the No. 23 pick.

Baltimore sent the No. 23 pick to the Buffalo Bills for No. 25 and a fourth-rounder. It used the 25th pick to select Linderbaum.

As for the questionable first-round moves, the Jacksonville Jaguars’ pick of Travon Walker at No. 1 headlined Kiper’s list.

“When word first leaked out that the Jaguars were targeting Walker, I went back to the tape to see if I was missing something,” Kiper wrote. “He has intriguing physical traits, of course, but where were his one-on-one pass-rush wins? I just didn’t see him dominant in any game.”

The Detroit Lions have the distinction of being a winner and head-scratcher. Kiper praised their decision to take Aidan Hutchinson at No. 2 overall but had questions about trading pick Nos. 32, 34 and 66 to the Minnesota Vikings to acquire the No. 12 pick and select Alabama wide receiver Jameson Williams.

Austin Gayle of Pro Football Focus offered a different take in evaluating what the Lions did:

Kiper praised Williams’ talent, but he also noted the Lions’ roster isn’t in a position where they should be trading picks in the first three rounds

Another questionable team on Kiper’s list was the Green Bay Packers. They had two first-round picks but didn’t use either one to address their need at wide receiver after trading Davante Adams to the Las Vegas Raiders.

Instead, Packers general manager Brian Gutekunst took Georgia teammates Quay Walker (No. 22) and Devonte Wyatt (No. 28) to help the defense.

Of course, this isn’t a surprise given how the Packers have avoided drafting receivers in the first round for two decades.

The Packers selected two Georgia defenders in the 1st round, the first team in the Common Draft era to take 2 defensive players from the same school in the same 1st round.<br><br>The Packers have now gone 20 consecutive drafts without selecting a WR in the 1st round. <a href=”https://t.co/lUpsSDg1NZ”>pic.twitter.com/lUpsSDg1NZ</a>

Perhaps no team had a more head-scratching move than the New England Patriots. They did trade back, which was probably the least surprising thing that happened all night, going from No. 21 to 29 after a deal with the Kansas City Chiefs.

But when the 29th pick came up, the Patriots selected Chattanooga guard Cole Strange. It was such a surprise to the point that Los Angeles Rams head coach Sean McVay joked to reporters that they scouted him thinking he might be available when they make their first pick at No. 104.

Rams reaction to Patriots selection of Cole Strange at #29.<br><br>This is hysterical. <a href=”https://t.co/ADzqt4lizQ”>pic.twitter.com/ADzqt4lizQ</a>

Kiper wrote he thought Strange “might” sneak into the end of round two. Bill Belichick was able to add pick Nos. 94 and 121 in the trade with Kansas City, so perhaps he has something else planned for Day 2 and 3.

There’s still a lot of drafting to be done. There are 10 teams still waiting to make their first pick because of trades.

The first round is where most of the stars are going to come from in a draft, but there are plenty of quality players on the board. If a team made a head-scratching move on Thursday, it doesn’t necessarily have to sink their entire draft if they have a good plan for Friday and Saturday.

The draft will resume on Friday at 7 p.m. ET with rounds two and three.

This Is What Elon Musk Did the Day He Bought Twitter. It’s an Amazing