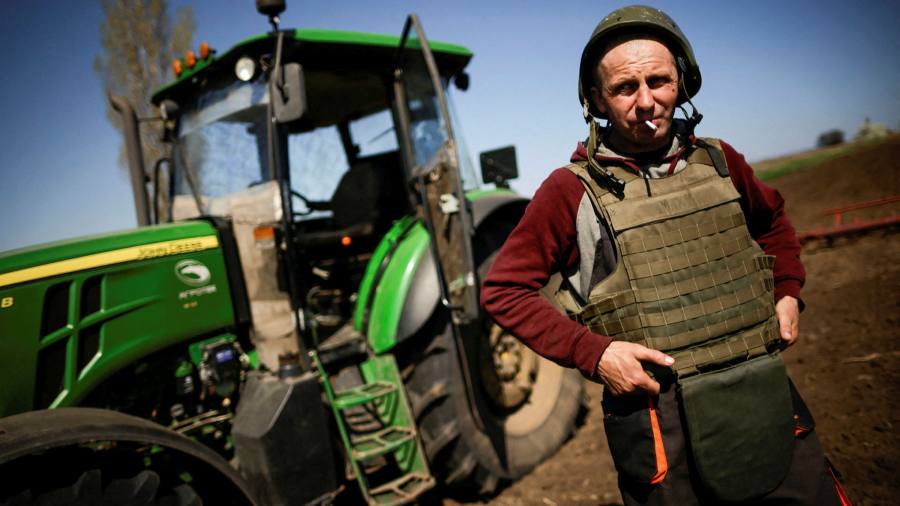 This article is an on-site version of our Disrupted Times newsletter. Sign up here to get the newsletter sent straight to your inbox three times a week

War in Ukraine is acting as a “multiplier of disruption in an already disrupted world” says FT chief economics commentator Martin Wolf in his latest column.

Nowhere is this more true than in energy (see below) and global food markets, our two big stories today.

As our Big Read details, Ukraine is known as the breadbasket of Europe for good reason. It is one of the key suppliers of agricultural commodities such as wheat and corn as well as almost a third of the world’s sunflower oil, benefiting from richly fertile soil and deep seaports to facilitate international trade.

All that however has been thrown into jeopardy since Russia’s invasion, as farmlands turn into battlefields and transport infrastructure gets smashed, creating hunger across the country and global supplies left short.

Food prices have increased hugely in response: “The cost is devastating, and it has consequences which are going beyond the borders of Ukraine,” commented Arif Husain, chief economist at the World Food Programme. For poorer countries already struggling with the economic impact of Covid-19, the impact is appalling as prices of fertiliser, animal food and fuel shoot up.

There is also a growing problem of crop protectionism. Indonesia, the world’s biggest exporter of palm oil, this week banned supplies leaving the country in a bid to contain surging domestic prices. One analyst said the move was “yet another reminder of the vulnerability present across agricultural supply chains in an environment of already historically tight inventories, compounded by the indefinite loss of Ukrainian export volumes and historically high production costs.”

There is hope that some of the strain may be alleviated from supplies in Latin America, but the outlook remains bleak.

Surging food prices are also moving their way up domestic political agendas. We report today on tensions at the heart of the UK government over whether Britain should unilaterally cut tariffs on food imports after new data showed grocery prices have risen 5.9 per cent in the past year, equivalent to £271 a year for the average household, the biggest jump since December 2011.

But in other parts of the world, the situation is much more serious. As Martin Wolf notes: “This war follows pestilence and threatens famine. Together these are three of Ezekiel’s four “disastrous” judgments of the Lord. Alas, the fourth, death, follows from the other three.”

Need to know: the economy

European gas prices surged today after Gazprom cut off supplies to Poland and Bulgaria because they had failed to make payments in roubles, its new precondition. European Commission chief Ursula von der Leyen said the move was blackmail as the EU stepped in to help shore up supplies. Germany, heavily reliant on Russian gas, said it was “not nervous”.

Latest for the UK/Europe

Germany, the eurozone’s biggest economy, slashed its growth forecast for this year from 3.6 per cent to 2.2 per cent because of the war and said it expected 2.5 per cent in 2023. It predicts inflation of 6.1 per cent for 2022, a rate not reached since the 1970s oil crisis and the period shortly after reunification in 1990. New data showed consumer sentiment in the country plummeting — with the same happening in France.

European Central Bank chief Christine Lagarde has been trying to get across the message that the ECB will take a more “gradual” approach to curtailing inflation than the US Federal Reserve, but many investors still think the first interest rate rise in a decade could come in July.

UK prime minister Boris Johnson announced a crackdown on “unacceptable behaviour” from companies that is said to be exacerbating the cost of living crisis. Official data showed many households were being forced to borrow money to pay their bills, with nine in 10 adults reporting a rise in expenses between March 16 and 27, up from 62 per cent in November.

Fortunately Johnson’s chancellor Rishi Sunak has more scope to address the crisis now that government borrowing has halved as the economy springs back to life and taxes roll in. Trade news on the other hand is a lot bleaker: post-Brexit red tape, customs controls and taxes have caused many small businesses to stop trading with Europe. The government is also on the defensive about financial services jobs moving to the EU after Brexit.

Freshly elected French president Emmanuel Macron faces a tricky balancing act as he attempts to keep economic recovery on track while dealing with problems ranging from surging fuel costs to pension reforms. Public finances are under pressure after the pandemic inflated France’s budget deficit to 6.5 per cent of output last year, and the government has already offered €25bn in emergency relief on energy prices.

The EU’s role in health policy has been turbocharged by the pandemic, including greater use of joint procurement, plans for tackling cancer and public-private partnerships to help European pharma companies develop breakthrough drugs. Read more in our special report: Innovation in Healthcare.

Despite war in Europe, the Biden administration is focused on what it sees as the US’s biggest long-term objective: working up an international framework for dealing with China. Our Big Read explains.

Economic recovery in South Korea is slowing as concerns grow over inflation and falling demand from Covid-hit China. Hong Kong chief executive Carrie Lam dashed any hopes that the city’s quarantine requirements might be easing.

Australian inflation hit a 21-year high of 5.1 per cent in the year to March 31 as the country prepares for next month’s general election.

No sooner had Elon Musk celebrated his (likely) success at buying Twitter than Brussels sent him a warning that his “free speech” approach could be at odds with the EU’s new set of digital rules, setting up a potential high profile global regulatory battle. Shares in Musk’s Tesla business sold off as investors feared he might dilute his stake to finance the Twitter deal.

Microsoft cast off worries about the macroeconomic environment by predicting strong revenue growth as customers invested in systems to increase productivity and automate operations. “In an inflationary environment, the only deflationary thing is software,” said chief executive Satya Nadella.

Profits at Google parent company Alphabet fell $1.5bn in the first quarter compared with last year, as its YouTube division was hit by the effects of war in Ukraine, confirming slowing momentum in online advertising.

BASF, the world’s biggest chemical company, said it would close its remaining businesses in Russia and Belarus by July. The group is one of the last big German groups to make a move since the war started.

Shares dived in US industrial conglomerate GE after the company said supply chain problems were likely to worsen as a result of China lockdowns.

Earnings season for European banks is in full swing. Deutsche Bank reported its highest quarterly profit in nine years of €1.2bn as its bond traders took advantage of market turmoil. Credit Suisse recorded a SFr428mn loss and management changes after a series of legal wrangles. HSBC said the war and slower growth in Asia had hit profits. Santander was lifted by economic recovery in Europe and UBS enjoyed its best first quarter in 15 years thanks to its investment banking business. Lloyds profits, however, fell 15 per cent as it took extra provisions to cater for the growing impact of inflation on the UK economy.

The experience of Wall Street bankers during the Shanghai lockdown has added to a wave of regulatory reforms that could hamper the city’s ambition to become an international financial centre, writes Asia financial correspondent Tabby Kinder.

PepsiCo announced $500mn in charges — the biggest hit yet for an American company from the impact of the war in Ukraine — but still expects an increase in full-year revenues. It has suspended sales of brands such as Pepsi and 7Up in Russia but continued to offer products such as milk and baby food for humanitarian reasons. Food giant Kraft Heinz forecast increased sales for this year as higher prices helped mitigate supply chain problems and rising commodity costs.

Shipping giant AP Moller-Maersk said container demand — a proxy for global trade growth — could shrink this year as supply chain problems persist. The Danish group was still able to increase its guidance for full-year earnings to $30bn, up from its previous estimate of $24bn. The Lex column warned that freight rates could catch the attention of regulators if they remained at current elevated levels.

What energy crisis? UK share dividends are expected to beat forecasts this year thanks to higher oil and commodity prices boosting London-listed energy and mining stocks.

London’s Heathrow airport took a different view from the rest of the aviation industry’s bullish stance by saying the current surge in demand was a ‘bubble’ that will burst. Cynics argue this is posturing ahead of a decision from the UK regulator on a price cap for airline fees. However, BA has extended its flight cancellations to June because of staff shortages.

The World of Work

Could training and “upskilling” be the way to retain staff in the post-pandemic workplace and counter the effects of the Great Resignation? Listen to our latest Working It podcast.

Get the latest worldwide picture with our vaccine tracker

Do you have incessant arguments with your partner about money? Try our latest Money Clinic podcast for a spot of couples therapy with consumer editor Claer Barrett.

FT Asset Management — The inside story on the movers and shakers behind a multitrillion-dollar industry. Sign up here

Thanks for reading Disrupted Times. If this newsletter has been forwarded to you, please sign up here to receive future issues. And please share your feedback with us at disruptedtimes@ft.com. Thank you