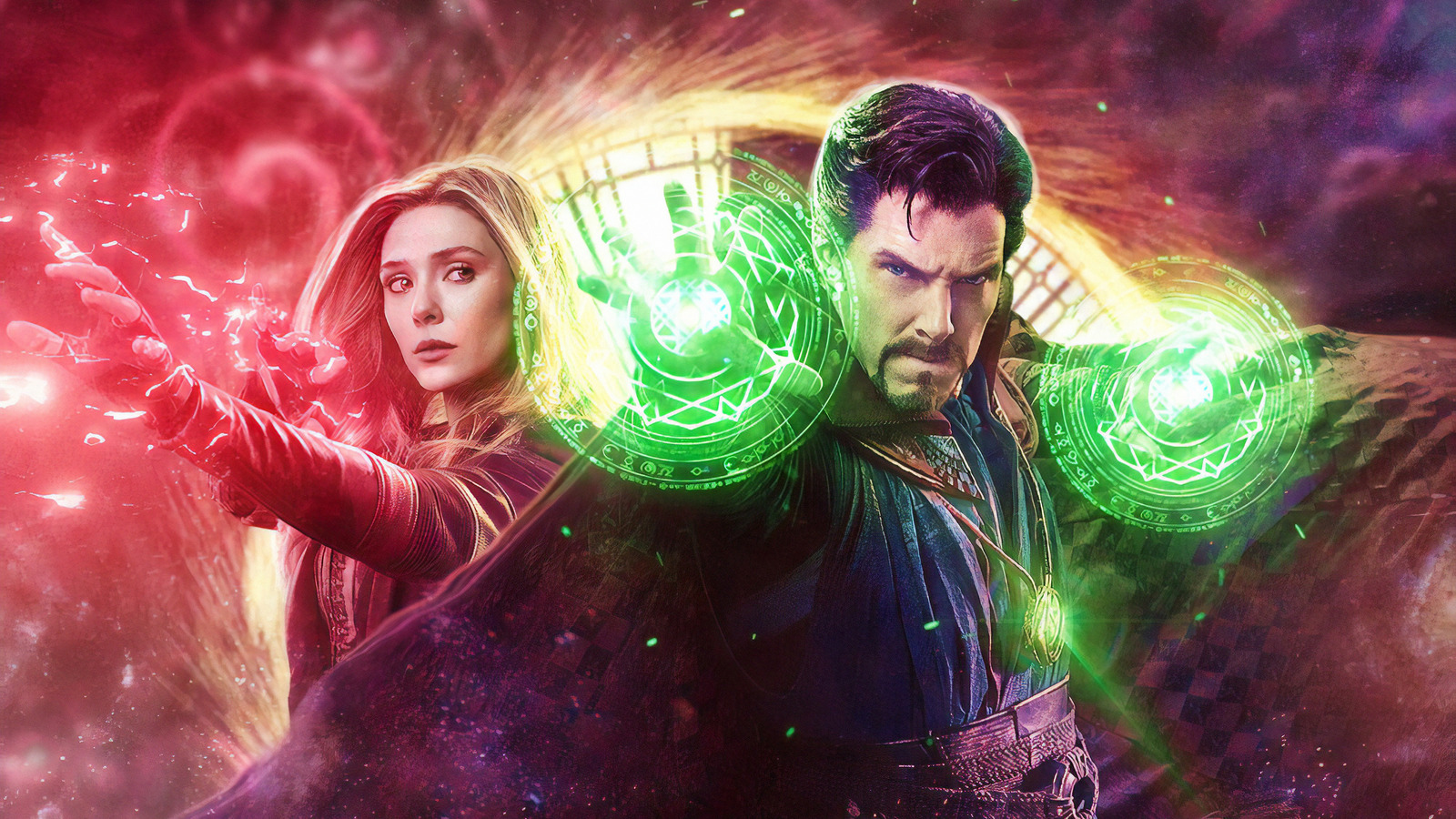 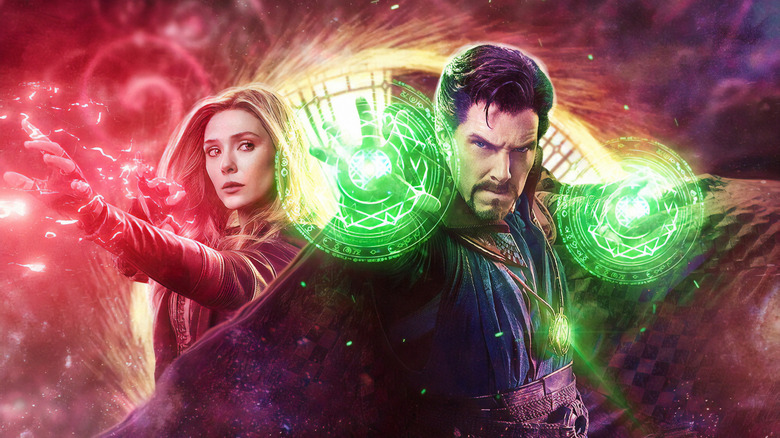 Sam Raimi’s “Doctor Strange in the Multiverse of Madness” is scheduled to be released in theaters on May 4, 2022, bringing with it the usual firestorm of anticipation from the many fans of Disney’s Marvel Cinematic Universe. This will be the 28th film in the series, the fifth to feature the character in a notable role, and the second wherein he is mentioned in the title. Even if one wasn’t following /Film’s (excellent) coverage of the film leading up to its release, one could glean from the title that “Multiverse of Madness” will feature trips to other dimensions.

The Marvel multiverse has already been teased in the “Loki” TV series, as well as the hit film “Spider-Man: No Way Home,” and speculation is riding high as to what Marvel characters — from any dimension — will appear in the final film. Is there anyone, from any movie, that you, dear fan, have wanted to see interact with Dr. Stephen Strange? Thanks to the multiverse, they are now free to be included in the MCU. Dazzler? Professor X? Strong Guy? Annihilus? Super Skrull? The Darkhold Redeemers? Rune? Prime? Hard Case? Freex? Mantra? Sludge? Batman? They’re all fair game now. Okay, maybe not Batman.

As long as the public is in the midst of speculating about a film none of us have seen yet, why not lay down a wish list? Every fan has a favorite they would love to see in the MCU, and here is a list of ours, here at /Film. 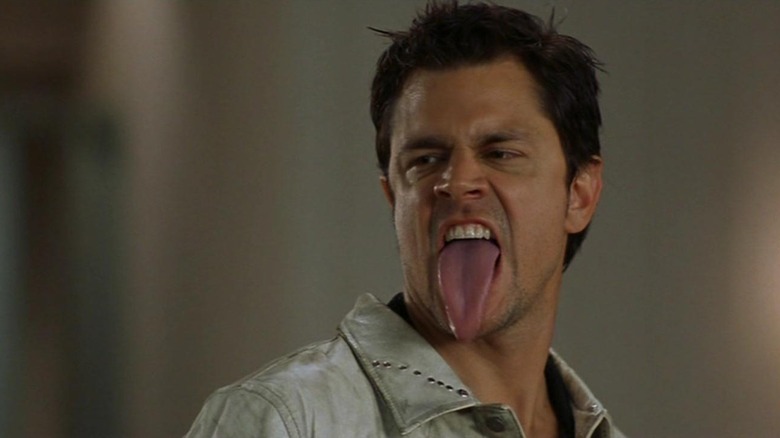 First appearing in John Waters’ 2004 film “A Dirty Shame” (the last film Waters has made to date), Ray-Ray (Johnny Knoxville) was the leader of a peculiar sex cult in Baltimore made up of members who has all suffered traumatic head injuries. In the world of “A Dirty Shame,” getting thwacked on the head instantly hypercharges your libido, and Ray-Ray had gathered all the local residents who wish to explore their peculiar fetishes openly. Ray-Ray takes in a new student (Tracy Ullman) and teaches her about plate jobs, mysophilia, the bear community, sploshing, tromboning, Roman showers, and other sexual practices that require an internet search you cannot do at work.

Ray-Ray is relentlessly sex positive, and very responsible, enjoying both the zesty adult fun and wicked depraved filth of loving a life devoted to sexual pleasure.

He could probably take Doctor Strange in a fight. Or knock him on the head and welcome the sorcerer into his cult of sex-lovin’ followers. 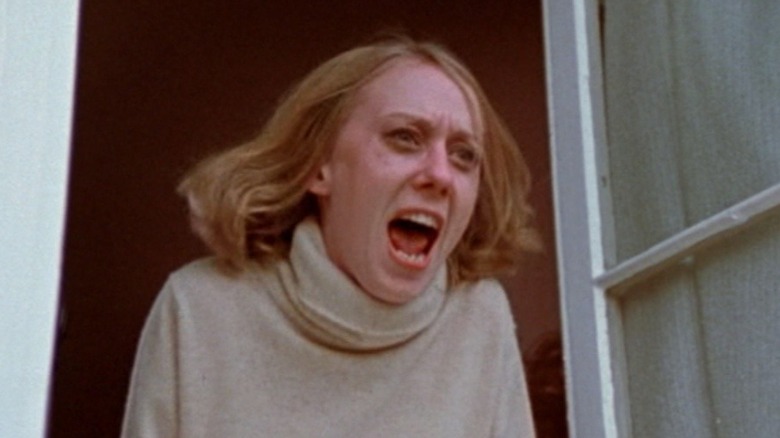 The first 15 minutes of John Waters‘ 1977 film “Desperate Living” are a sublime experience of cinematic hysteria. In that first act, Peggy Gravel (the amazing Mink Stole) charges around her spacious Baltimore home, raving about anything that — and at anyone who — passes her field of vision. She hates the Supreme Court. She’s concerned 7 year olds are getting pregnant. She hates everything. Peggy will eventually take to the lam with her maid Grizelda (Jean Hill) after Grizelda smothers Peggy’s husband to death. They will be arrested and banished to Mortville, a filthy shanty village overseen by the wicked Queen Carlotta (the immortal Edith Massey) and her equally wicked daughter, Princess Coo-Coo (Mary Vivian Pierce). 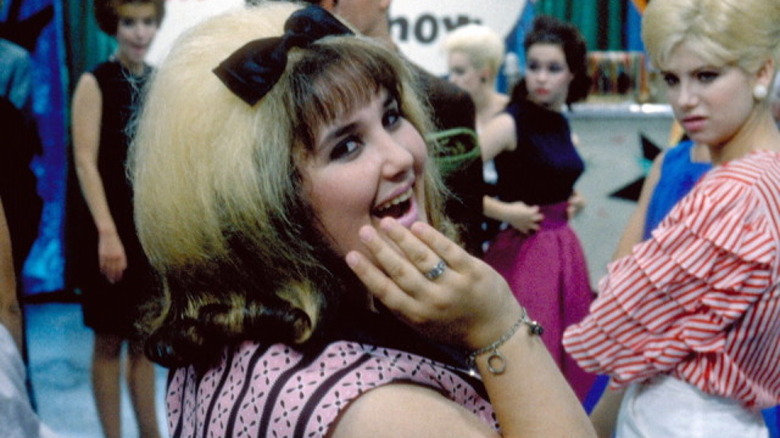 The early 1960s were an exciting time in TV history, as local TV began to expand. Many cities had their own low-watt TV signal towers which were only powerful enough to reach the edges of town. Local talent could broadcast live from the studio, creating miniature cultural obsessions that only ever reached viewers within a 50-mile radius. In John Waters’ 1984 film “Hairspray,” the local show in question is “The Corny Collins Show” (inspired by the real-life “The Buddy Deane Show,” 1957 – 1964) a teen dance program wherein Baltimore’s high school kids could catch the eye of the host and spend a precious 10 seconds dancing on camera.

Baltimore’s most hopeful dance star is Tracy Turnblad (Ricki Lake), a relentlessly positive young woman who confronts snotty neighbors, takes down fat-phobia, and eventually calls out Baltimore’s institutionalized racism to become the biggest local star “The Corny Collins Show” has ever seen. Tracy explores the world of underground jazz (Pia Zadora reads “Howl“), and ensures that her stuffy, stuck-in-the-’50s mom Edna (Divine) is up to date in her fashions and her attitudes.

Tracy would update Doctor Strange’s outfits and push him toward a more progressive way of thinking. 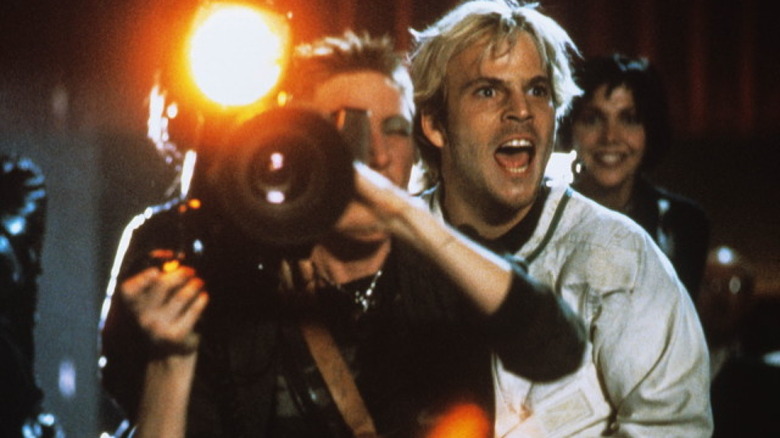 Who hasn’t been occasionally annoyed — or even downright enraged — by the Hollywood machine’s overwhelming presence in conversations about cinema? Since Doctor Strange can traverse the multiverse, perhaps he will land in a dimension wherein “Doctor Strange and the Multiverse of Madness” is merely a film that the character — in a metaphysical twist — can pay to see in a theater. And who would be outside raging against the commercial success of a shallow, Disney-backed blockbuster? Why Cecil B. Demented (Stephen Dorff) of course, Baltimore’s most resolute underground filmmaker.

Demented couldn’t fight a sorcerer, but he could induct him into a filmmaking cult. Heck, with a wizard on your side, special effects are kind of taken care of. 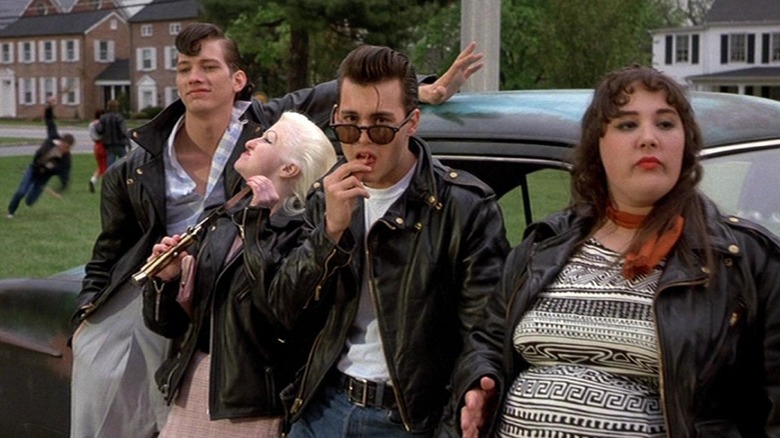 The rockabilly punks in 1950s Baltimore were — as depicted in John Waters’ 1990 film “Cry-Baby” — the coolest people to have ever existed. Actively eschewing the squares, the drapes wore black leather, hair oil, a lot of makeup, and sported switchblades. And while they had a reputation for being “dangerous,” the drapes were actually a close-knit group of ultra-sexual music lovers who would regularly gather for raucous backyard concerts and tongue kidding. While they were led by Wade “Cry-Baby” Walker (Johnny Depp), the gang included a whole family of colorful punker friends: Pepper (Ricki Lake) is happy to have been knocked up, Wanda (Traci Lords) snarls at everything, and Hatchet Face (Kim McGuire) has character. The mom and pop of this group are played by Susan Tyrell and Iggy Pop.

Would the drapes be friends to Doctor Strange, or foes? I would guess a square like Doctor Strange would see them as a threat, but would eventually be charmed by their awesome rockabilly music, and would tongue kiss Susan Tyrell. 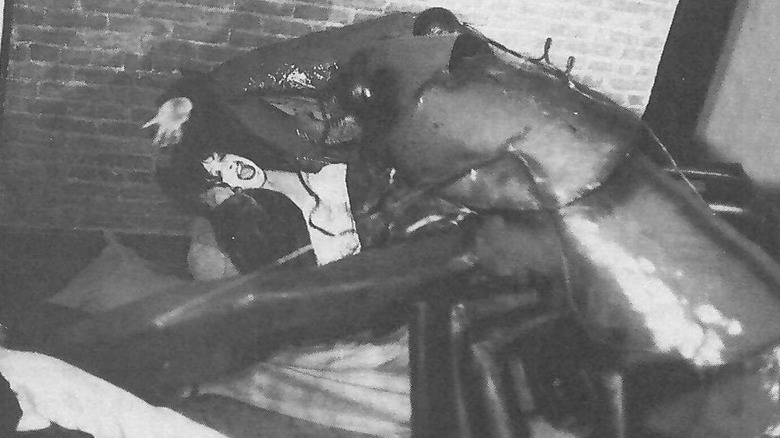 In John Waters’ 1970 trash nightmare “Multiple Maniacs,” Lady Divine (Divine) has a very weird day. She starts her morning as she ordinarily does, overseeing a traveling Baltimore circus called The Cavalcade of Perversion wherein performers eat vomit, kiss members of the same sex, and do many other things besides designed to shock and terrify the pinks. By the end of the day, Lady Divine will have committed robbery, multiple homicides, will have accrued a new lesbian lover (Mink Stole), will have committed more murder, and eventually flopping down on the couch. Waters has said in a now-lost interview with the author that Lady Divine was meant to resemble Godzilla: a force of destructive power.

Once Lady Divine is resting, however, her day reaches the weirdest possible climax: a violent visit from Lobstora, an evil monster lobster. The assault drives Lady Divine off the deep end, and she charges out into the street to be taken down by Baltimore cops.

Lobstora hasn’t made an appearance in a film since. Perhaps now is the time. 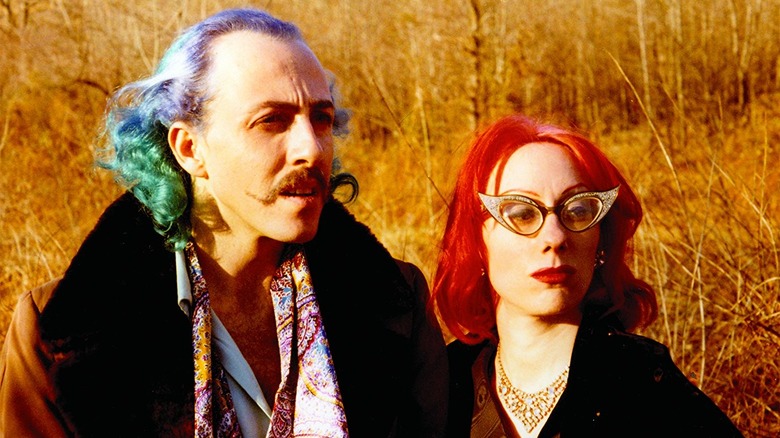 Perhaps some of the most evil people to appear in cinema, Raymond and Connie Marble (David Lochary and Mink Stole) aspired to be the Filthiest People Alive, a coveted title in the underground of Baltimore. Their modus operandi was quite elaborate: They would kidnap locals and forcibly impregnate them in their basement. They would then sell the resulting babies to lesbian couples, and use the money to perpetuate a drug ring. Their true nemesis was Babs Johnson (Divine), and they mail her a bowel movement as a threat. They will also eventually burn down Babs’ trailer.

Oh, Babs will not stand for that.

John Waters’ 1972 classic “Pink Flamingos” has not dated one whit in that it still possess the raw power to shock, repel, and disgust even the most jaded modern viewer. Waters has said “Pink Flamingos” has been brought before several courts under accusations of indecency, and Waters admits he has no defense because, darn it, “Pink Flamingos” is indecent. By design, of course.

Marvel’s clean-cut magician would be utterly destroyed by Connie and Raymond Marble, unsure how to confront their horrific cruelty. Is there a spell to handle a box full of human waste? 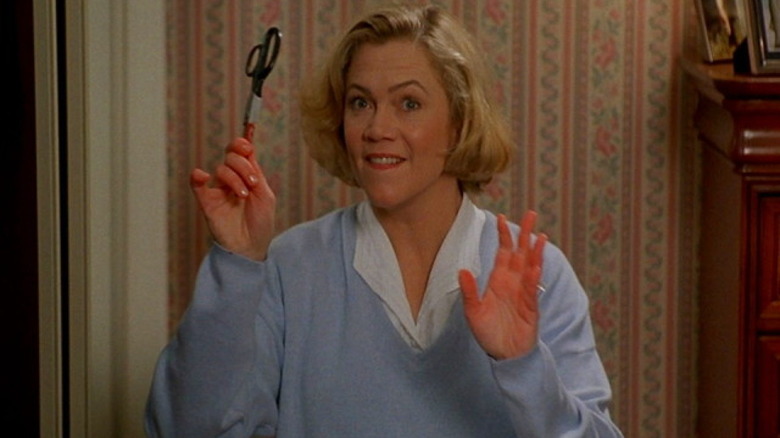 Although Beverly Sutphin (Kathleen Turner), the title character in John Waters’ 1994 comedy “Serial Mom,” is a legitimate serial killer, I picture her as a good friend and ally. Beverly’s upbeat attitude and wide-eyed sunniness almost make up for the fact that she kills people who step out of line. “Serial Mom” features one of Turner’s greatest performances, and if you can get through her nasty prank phone calls without laughing, you have a stronger constitution than I.

“Serial Mom” is a sublime sendup of 1950s Baltimore housewife culture, and has become a cult classic in the years since its release, inspiring a rather dandy Shout! Factory release.

I picture an uneasy alliance between Beverly and Doctor Strange. He, murdering interdimensional monsters (or other superhero shenanigans), she secretly murdering his allies. Look out, Moon Knight! Don’t wear white after Labor Day! 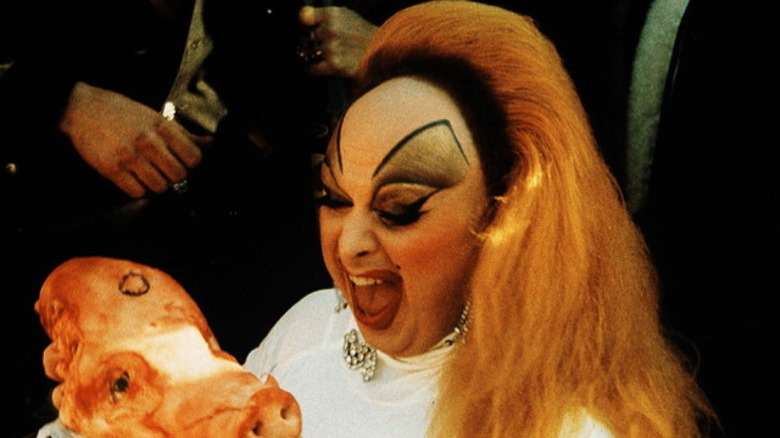 If Doctor Strange is facing off against Raymond and Connie Marble, he will need Divine intervention to survive.

Babs Johnson, unlike the nihilistic Raymond and Connie Marble, has a philosophy: Kill everyone now! Condone first degree murder! Advocate cannibalism! Eat s***! Filth is my politics! Filth is my life!

A hero needs that kind of energy. 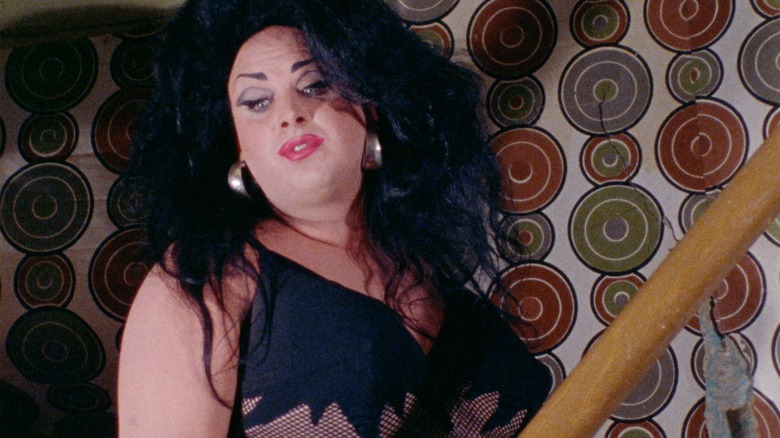 John Waters’ best film is undoubtedly his 1974 follow-up to “Pink Flamingos,” “Female Trouble.” In it, Divine plays Dawn Davenport — a character clearly inspired by Veda (Ann Blyth) from “Mildred Pierce” — a vindictive, spoiled teen who longs for a pair of cha-cha heels for Christmas. When she doesn’t get them, she runs away from home and grows up in agony. She raises a bratty kid named Taffy (Mink Stole), and will eventually fall in with a group of guerilla criminal artists Donald and Donna Dasher (David Lochary and Mary Vivian Pierce) to commit acts of “art” all over Baltimore. Ugliness becomes beauty, and violence an aesthetic act. Dawn will soon become a walking work of art.

There is no better John Waters character than Dawn Davenport, which is saying a lot, given his movies are chock full of oddballs, freaks, and glorious weirdos. John Waters made trashy films about freaky people, but clearly felt a deep, abiding, unbreakable affection for them. Waters was not mocking his subjects, but glorifying them. Glorifying how freeing and fun and sexy and wild it is to be comfortably on the outside. How awesome it is to be a criminal who wants nothing more than to go down giving a big, filthy middle finger to the squares of the world.

Doctor Strange ends up marrying Dawn Davenport. She keeps him on a leash.

Read this next: Horror Roles That Changed Actors Forever

The post The 10 Characters We’d Like to See in Doctor Strange in the Multiverse of Madness appeared first on /Film.

Should I Take an Iron Supplement? Identifying Symptoms of Low Iron in Women