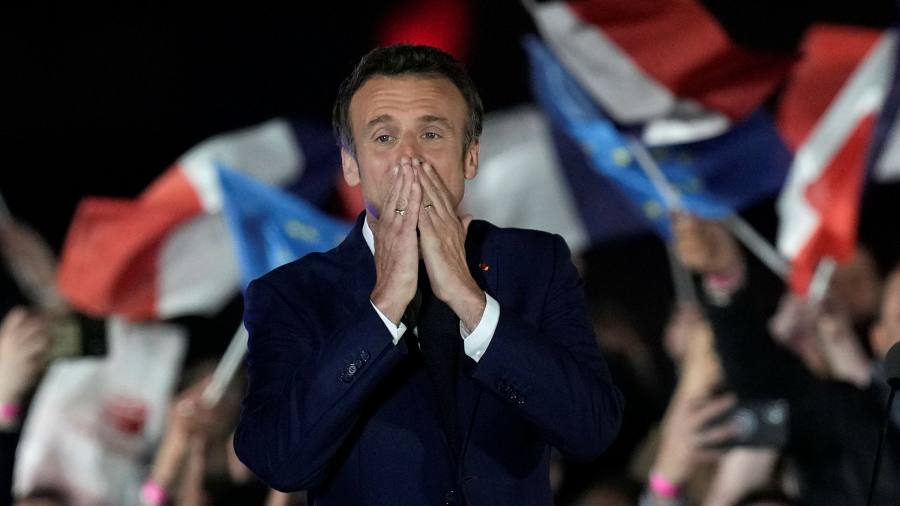 Emmanuel Macron is to be re-elected for a second term as French president after defeating his far-right rival Marine Le Pen in the second round of voting on Sunday, according to projections by polling agencies based on early returns.

Le Pen conceded after the projections on Sunday showed Macron winning about 58 per cent of the vote, against her 42 per cent. However, she vowed to fight on with her Rassemblement National party in elections for the National Assembly in June.

Once the results are confirmed, Macron will be the first French president to be re-elected in 20 years. Victory for Macron, first elected in 2017, will mean continuity in economic and foreign policy, and comes as a relief to investors and to France’s EU and Nato allies in the midst of the Russian invasion of Ukraine. A win for Le Pen would have been a geopolitical earthquake akin to Brexit or the election of Donald Trump.

“I am delighted to be able continue our excellent co-operation,” EU commission president Ursula von der Leyen tweeted on Sunday after congratulating Macron.

But the far-right has not performed as strongly as this in France since the second world war and Macron will preside over a deeply divided nation.

Happy Monday. I hope you have a great start to your week. Here’s the rest of the day’s news — Sophia

1. Putin has abandoned a peace deal in favour of a land-grab strategy The Russian president, who said he sees no prospects for a settlement, has lost interest in diplomatic efforts to end his war with Ukraine and instead appears set on seizing as much Ukrainian territory as possible.

2. Shanghai tightens lockdown with harsh measures Local authorities are fencing off apartment building entrances to further restrict movement in the city. Meanwhile, China’s army of censors are struggling to remove viral videos from spreading online that depict the growing frustration in the financial hub.

3. Blackstone takes aim at publicly listed real estate vehicles The buyout group has spent billions of dollars taking four real estate investment trusts, or “Reits”, private since the start of the pandemic. This leaves investors with fewer ways to cash out, but can be attractive for those interested in smoothing out market bumps.

4. Cambridge Innovation Capital’s funding brings it to $1bn assets CIC has raised £225mn to invest in early stage start-ups operating in areas from cell therapies to quantum computing. The VC firm, which has a special contract with Cambridge university, likens innovation and entrepreneurship in the university city to Silicon Valley.

5. Rising US rates and China’s slowdown hit renminbi China’s renminbi is heading for its biggest weekly drop since before the pandemic as the country’s deteriorating economic outlook and rising returns on US debt undermine the draw of Chinese securities. The pound dropped to its weakest level since late 2020 today after the release of weak retail sales data.

Q1 results Tesla and Coca-Cola will both release their first-quarter results today, as well as Activision Blizzard, Deutsche Börse, Hyundai, Philips Electronics, and others.

Anzac Day Australia commemorates the ill-fated landing of the Australia and New Zealand Army Corps on the beaches of Gallipoli in Turkey on April 25 1915.

Register here to attend the FT’s first Crypto and Digital Assets Summit on April 26-27. Be sure to check out the full line-up of events, including remarks from Changpeng Zhao, founder and chief executive of Binance.

Are airlines ready for a summer travel boom? The aviation industry is struggling to expand operations after two years of Covid disruptions, cost-cutting and redundancies. After 24 months of crisis management, passengers are suddenly coming back so quickly that the industry does not know what to do with them.

Elon Musk could help Twitter, but not in the way he thinks The world’s richest man seems largely uninterested in the area in which he could most help Twitter: rethinking its business model. Instead of focusing on scrapping the platform’s moderation, Musk could focus on figuring out better governance for social media companies, writes John Thornhill.

The crypto industry’s pricey Super Bowl ads fell flat LeBron James and Larry David were among the star-studded cast of crypto commercials run during the American football game two months ago. Since then, trading has turned sluggish as factors like rising interest rates and the war in Ukraine have dampened investor spirit.

The big cancellation is spreading beyond Netflix The growing subscription economy is finally starting to trend downward, as rising inflation causes consumers to rethink discretionary spending. Streaming services such as Netflix are the canary in the coal mine — the gloomy climate is also casting a shadow over other sectors like clothing and restaurants.

What you should know if you’re fiddling your expenses A piece of corporate wisdom states that if a company wants to fire someone, the easiest way to do it is to go through their expenses. Over-exaggerating business expenses is so widespread that many don’t even consider it to be fraud. New digital systems ushered in by the pandemic might make it harder to fudge the numbers, though.

“Nobody is remotely real around the royals”, says former New Yorker editor Tina Brown as she discusses her new book about the British monarchy, her role as a “transatlanticker” and knowing everyone from Obama to Malala.

Inside Politics — Join us for analysis of the latest UK political news, plus polls and a dose of culture — by new columnist Stephen Bush. Sign up here

Working It — Discover what’s shaking up the world of work with Work & Careers editor Isabel Berwick. Sign up here

The Swiss Tradition Is A Perfect Match For Bitcoin