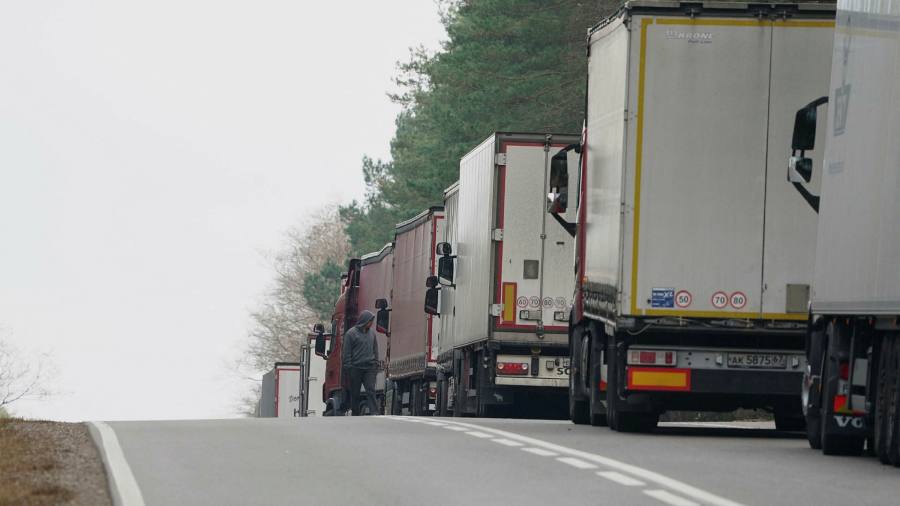 
Russian and Belarusian trucks are stuck in long queues at the EU’s eastern borders as hauliers try to get out of the bloc, hours before a ban on their vehicles comes into force on Saturday.

Lorries are backed up for more than 40km in Poland and have been waiting between three and 10 days to leave, according to people in the logistics industry, who say thousands of trucks are affected after Brussels imposed sanctions on the Russian and Belarusian fleets.

Jan Buczek, head of Poland’s ZMPD, a trade body for Polish transport groups, said that in recent days the queue at the Koroszczyn border crossing into Belarus — which lies on the main route from Berlin to Moscow — had reached 80km.

“There is no way the Belarusian and Russian trucks will all manage to leave Polish territory by tomorrow,” he said.

According to data from Poland’s National Revenue Administration, the wait at the Koroszczyn crossing was 33 hours on Friday morning, while at the more northerly Bobrowniki checkpoint it was 56 hours. Haulage groups said there were also long queues at border crossing points in Lithuania and Latvia.

The EU introduced sanctions this month prohibiting trucks operated by Russian or Belarusian companies from entering or remaining in the bloc, with exemptions for vehicles transporting food, medicine, mail and energy. It set a deadline of April 16 to exit the bloc.

The sanctions were part of the EU’s latest attempt to punish Russia for its invasion of Ukraine.

With customs officials making rigorous checks on vehicles crossing the border, thousands of vehicles could fail to make it out in time and would be at risk of being seized by national authorities.

The situation has been exacerbated because a crossing between Poland and Belarus at Kuznica has been closed since Belarus’s authoritarian regime orchestrated a migration crisis on its borders with the EU last winter.

Aliaksandr Kuushynau, a senior executive at Gurtam, which provides software for GPS fleet tracking, said that according to his company’s data about 10,000 Russian and Belarusian vehicles were still in the EU. “These vehicles will not make it back into Russia in the next few days,” said Kuushynau.

Another industry source said: “It’s a tricky situation. We think there are at least a few thousand [Russian and Belarusian trucks] still in the EU.”

Buczek said that roughly 3,000 Polish trucks in Belarus and Russia could be put at risk by any action against the Russian and Belarusian lorries waiting at the Polish border.

“We should look for a benign solution, because any aggressive form of action by Europe against the Russian and Belarusian trucks at the border will instantly spark retaliation against our trucks that are on the way or coming back from markets like Mongolia, Kazakhstan and Uzbekistan,” he said.

Luis Gomez, president of Europe at XPO Logistics, one of the world’s biggest trucking companies, said the situation could put further strains on the haulage sector in Europe but would probably have less impact than the exodus of 100,000 Ukrainian drivers from an industry already suffering from staff shortages.

How To Protect Client Data From Breaches