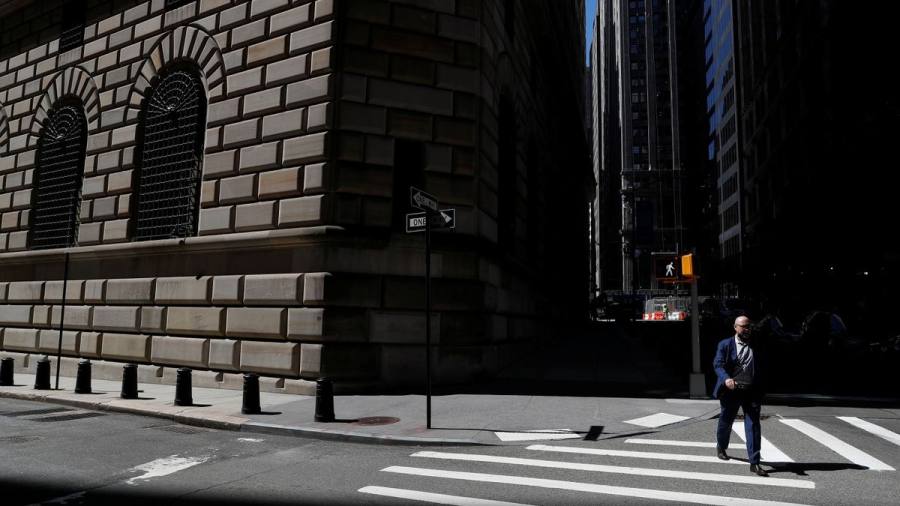 Happy Friday. How well did you keep up with the news this week? Take our quiz.

The number of failed trades in the US corporate bond market shot higher following Russia’s invasion of Ukraine, with investors linking the settlement problems to sanctions imposed after the war began.

Nearly $70bn of transactions failed in the week ending April 6, and for the past six weeks failed trades have averaged just over $86bn, according to data updated on Thursday by the Federal Reserve Bank of New York.

The value of failed trades was sharply higher than the long-term average of $40bn a week, which largely persisted into January. In the week ending March 23, close to $150bn of trades failed, the most since 2007.

A complex chain of custody ties together the market for US corporate bonds, where roughly $30bn of securities change hands daily. Once a bond is traded, investors pass it on to their prime broker, who settles the trade, in effect confirming a change in ownership.

But differences between bank trading desks, prime brokers and other financial intermediaries in how to implement myriad sanctions against Russia have upset this typically smooth process.

Thanks for reading FirstFT Europe/Africa. Here’s the rest of the day’s news — Gary

1. Le Pen exploits cost of living fears as French run-off vote looms Ahead of the April 24 presidential election run-off, far-right candidate Marine Le Pen is looking to make the most of what French voters tell pollsters is their biggest priority: the soaring cost of living.

2. Bookings for remote UK holiday cottages hit by fuel price surge Bookings for UK holiday parks and cottages in far-flung locations have been hit by holidaymakers’ concerns over rising fuel prices even though operators have reported a last-minute jump in Easter weekend reservations.

3. Isis ‘Beatles’ member convicted A US jury has found El Shafee Elsheikh, a former British citizen and Isis fighter, guilty of all counts including hostage-taking resulting in death and conspiracy to murder US citizens outside the country. He faces a mandatory sentence of life in prison.

4. Elon Musk offers to buy Twitter at $43bn valuation The Tesla boss has made a hostile bid for Twitter with an offer that values the company at $43.4bn, although he acknowledged his gambit to take the social media platform private may fail.

5. Pakistan army dismisses Imran Khan’s US conspiracy claim Pakistan’s military establishment dismissed ousted prime minister Imran Khan’s claims that he was the victim of a US-led conspiracy and described his visit to Moscow on the day Russia invaded Ukraine as “embarrassing”.

Easter and Passover Markets around the world from Singapore to the UK and US will be closed today in honour of Good Friday. Passover also begins at sundown. In Vatican City on Sunday, Pope Francis will lead Easter Mass in St Peter’s Square.

The Invictus Games The competition for wounded service personnel begins in The Hague tomorrow.

Join us for the FT’s Crypto and Digital Assets summit on April 26-27. Register today to be part of a critical conversation with the world’s global financial and corporate elite, as they carve out the path ahead for bridging traditional finance and the crypto leaders of tomorrow.

‘Planting trees in Scotland will not fix climate change’ Companies and investors seeking a simple solution to climate pledges should plant fewer trees in the northern hemisphere and focus on restoring tropical forests, writes John Gapper.

Russia’s unlikely media revolutionary Once a socialite, Natalia Sindeyeva founded TV Rain, a lifestyle channel that has evolved to become Russia’s only independent news channel and one of the country’s last bastions of free speech and dissent. Now in exile, she is plotting her next move.

Rising costs threaten centuries-old crafts It takes energy, lots of it, to turn sand into glass, barley into beer, clay into tiles and pots, wood into wheels and metal into castings. With rising bills and spiralling inflation, the UK’s 150,000 craftspeople are feeling the pinch.

Panasonic bets on bigger battery to wean itself off Tesla Chief executive Yuki Kusumi said the Japanese electronics conglomerate expected the rollout of its next-generation electric vehicle battery would help the company diversify its business as it refocuses after a period of aggressive restructuring.

Britain’s migrant deal with Rwanda a boon to Kagame The agreement between London and Kigali is part of a campaign to burnish the international reputation of Paul Kagame, the Rwandan president whose treatment of his critics at home and abroad has attracted considerable criticism, writes Michela Wrong.

The great renaissance in book buying during the pandemic has highlighted the resilience of the classic reading format. Three new works about books shed light on why bound pages remain so popular.

Working It — Discover what’s shaking up the world of work with work & careers editor Isabel Berwick. Sign up here

Disrupted Times — Your essential FT newsletter about the changes in business and the economy between Covid and conflict. Sign up here

Thank you for reading and remember you can add FirstFT to myFT. You can also elect to receive a FirstFT push notification every morning on the app. Send your recommendations and feedback to firstft@ft.com. Sign up here