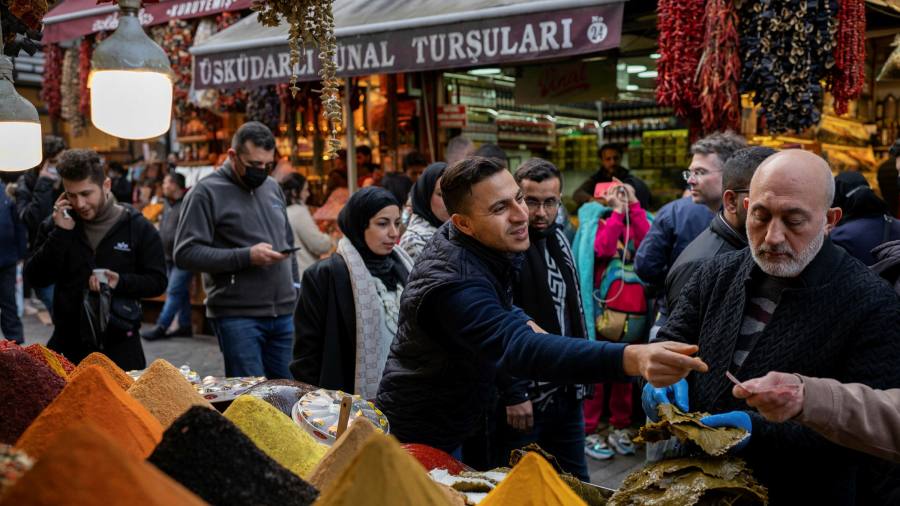 
Did Turkish inflation hit a 20-year high in March?

The bank has slashed its benchmark rate by a cumulative 500 basis points since September after Erdogan, a self-described “enemy of interest”, ordered policymakers to lower borrowing rates to fuel economic growth ahead of a 2023 general election.

In the months since September’s rate cut, the lira has tumbled 40 per cent against the dollar, setting off an inflation spiral.

Economists polled by Reuters expect official data, due April 4, to show that consumer prices rose by an annual 61.6 per cent in March.

A sharp rise in commodity prices triggered by Russia’s invasion of Ukraine has only made the pain worse. The state energy importer Botas on Friday raised natural gas prices for households by 35 per cent and for companies by 50 per cent. Turkey imports almost all of the oil and natural gas it consumes.

Despite signs that inflation will accelerate further, the central bank has indicated it believes price increases will slow once the crisis in Ukraine is resolved.

Some analysts remain cautious. “Turkey was dealing with inflation and a weak currency well before the war, and even if it were to end tomorrow, it will take time for Russia’s sanctions to be lifted and supply chains to return to normal,” said Enver Erkan, chief economist at Tera Securities in Istanbul.

Still, the central bank “is avoiding inflation targeting as long it can”, he said. “The government doesn’t want a rate rise a year before elections nor to make any concession on economic growth.”

Erdogan has said the tenets of Islam, which prohibits usury, now guide his economic policy and vowed the weaker lira will increase exports, expand manufacturing and create new jobs.

Prices last rose this fast in March 2002 just before Erdogan’s Justice and Development party swept to power on a platform of sound economic management.

But the pain Turkish households are feeling as groceries, utilities and medicine soar has eroded support for Erdogan’s party to its lowest level since it came to office. Ayla Jean Yackley

What will the Fed’s minutes say about supersized rate rises?

Market participants will be looking to Wednesday’s release of the Federal Reserve’s minutes from its March meeting for clues about how aggressive the central bank is willing to be to curb inflation.

Of particular interest will be any discussion about the Fed starting to shrink its $9tn balance sheet, by either allowing its US government debt holdings to mature without replacing them or by actively selling the securities.

Fed chair Jay Powell has signalled that the Fed may be prepared to announce a decision about quantitative tightening (QT) as soon as May. One major question to be answered is about the pace of QT — the “caps” on the amount of debt that are allowed to mature each month.

While the prospect of QT has been priced in by the market to a degree, discussion about large caps or an otherwise aggressive approach could push Treasuries lower, as the market braces for a fresh wave of supply.

The market will also be looking for any signals about the possibility of 0.5 percentage point interest rate rises. The futures market is currently pricing in one supersized rate rise at the Fed’s May meeting, and at least one other this year.

What, if anything, the Fed said at its meeting about 0.5 percentage point raises may not change market expectations dramatically. Chair Jay Powell in the days after the March meeting said that if the Fed decided it was appropriate to raise rates by more than a quarter point, it would do so. Following Powell’s remarks, other Fed officials came forward to echo his sentiments. Kate Duguid

Growth in new yuan loans — a measure of the total value of loans given by banks in China to businesses and consumers — slowed by more than expected in February, rising by just Rmb1.23tn compared with economists’ forecasts of Rmb1.49tn. The shortfall has put pressure on authorities to take further action to support the economy.

Analysts at BNP Paribas predict that new loans for March will rise to Rmb2.9tn. But with about 120 Chinese cities affected by China’s biggest Covid-19 outbreak since the pandemic began, the figure for March – due out on April 8 – carries a downside risk, said Xingdong Chen, chief China economist at the French bank.

“Because between growth and Covid control, local government to me is taking Covid control as a priority,” Chen said. “That is unfortunate.”

Chen said that while banks and local authorities had funds to disperse, China’s latest purchasing managers’ index data, which showed a contraction in both the manufacturing and service sectors of the economy for the first time in almost two years on Thursday, suggested that demand for loans may have flagged in March.

“[So] local governments are under pressure to speed up ongoing projects and [to find] new projects to start . . . [but] we are not actually too optimistic about this part,” Chen added.

Going forward, the question is whether China’s snap lockdowns, including one in the commercial centre of Shanghai, will be enough to quickly bring the outbreaks under control and unleash pent-up demand.

“April may be improving because of the sequential, seasonal demand,” said Chen. “[But] the real performance and the more normal performance will wait until May.” William Langley

Bitcoin And The Crypto Anarchist Manifesto