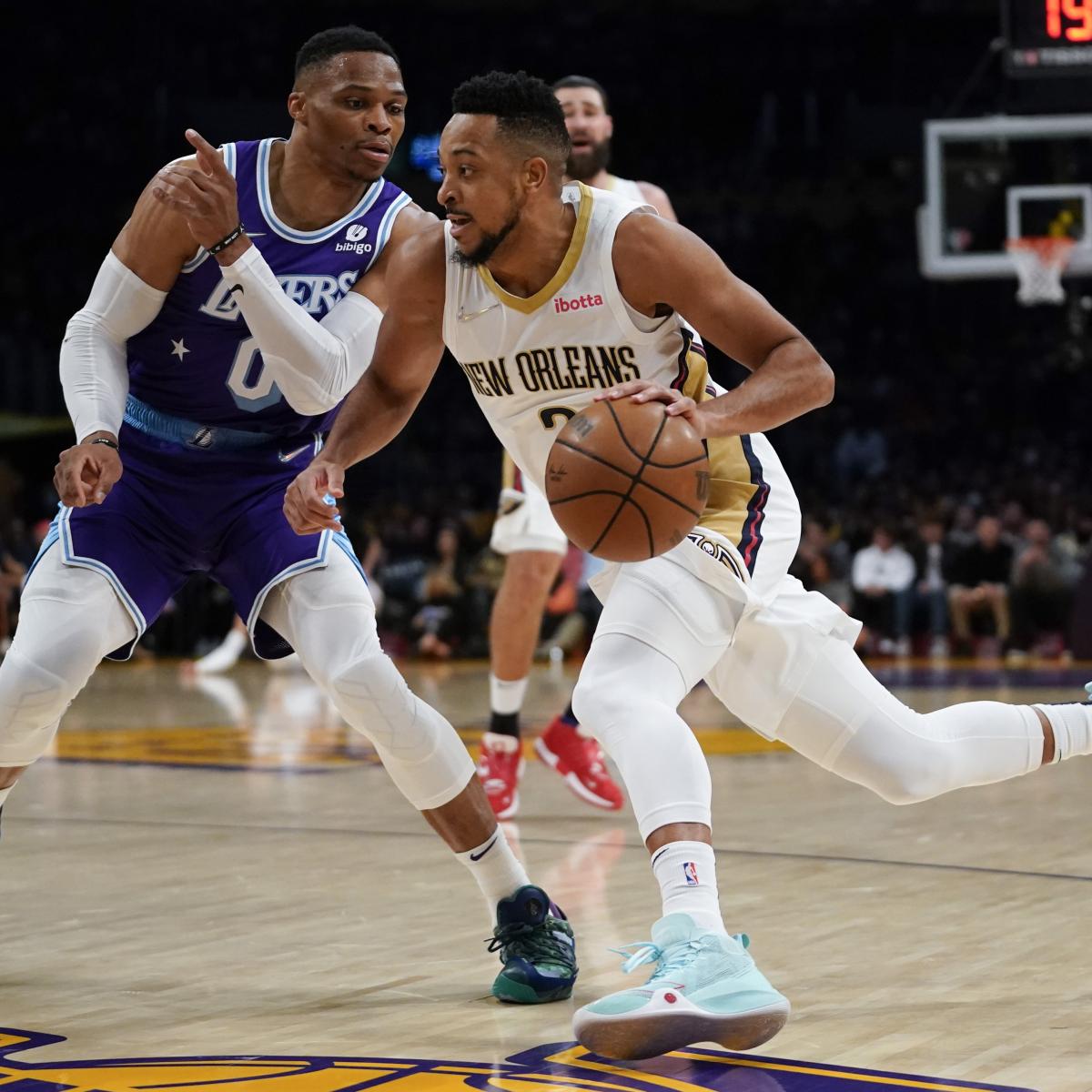 The New Orleans Pelicans spoiled the returns of LeBron James and Anthony Davis on Friday night.

Brandon Ingram, C.J. McCollum and Co. used a fourth-quarter comeback to create separation between them and the Los Angeles Lakers in the Western Conference play-in standings.

The Lakers’ situation was made worse by the San Antonio Spurs’ victory over the Portland Trail Blazers.

New Orleans holds a two-game lead on the Spurs for the No. 9 seed, while the Lakers are a full game back of the No. 10 seed.

Los Angeles has a tough road ahead to get back into the play-in round, and that starts on Sunday against the Denver Nuggets.

Denver will have extra motivation to win Sunday’s clash to preserve its spot in the top six of the Western Conference.

The Nuggets are only two games ahead of the Minnesota Timberwolves after losing to Karl-Anthony Towns and Co. in Denver on Friday night.

New Orleans put itself in fantastic shape to be the No. 9 seed with its win in Los Angeles.

The Pelicans have a fairly easy schedule left to secure the ninth position and avoid a road trip as the No. 10 seed in the first play-in round.

New Orleans stays in Los Angeles to face the Clippers on Sunday. The Clippers already have the No. 8 seed locked up.

The Pelicans then play the Sacramento Kings and Portland Trail Blazers, both of whom are eliminated from playoff contention.

The No. 9 seed should catch a break in its penultimate regular-season game since the Memphis Grizzlies are the No. 2 seed and could rest some of their players in the final week.

The Lakers have two games left against Denver, road games at Phoenix and Golden State and a home clash with Oklahoma City left.

Frank Vogel’s team needs to turn around its five-game losing streak soon, but it may be tough against Denver because of the Nuggets’ situation.

San Antonio could gain a two-game edge on the Lakers on Sunday since it plays host to Portland for the second straight contest.

The Spurs finish with Denver, Minnesota, Golden State and Dallas. It is far from the easiest finish, but a two-game pad over a struggling Lakers team could be a massive benefit in their favor.

Minnesota put the pressure on Denver in the hunt for the No. 6 seed with a win at Ball Arena on Friday night.

The Wolves are still two games back of the Nuggets, but they do have the easier schedule over the final four games.

Minnesota visits Houston on Sunday and then returns home for three games against Washington, San Antonio and Chicago.

Denver still has to play the Lakers twice, and it welcomes San Antonio to town on Tuesday in a game that will be important to the Spurs’ chase of the No. 10 seed.

Minnesota’s Friday win secured a 3-1 victory in the season series with Denver, which means it would take the No. 6 seed if the two teams finish on the same record.

The top 10 teams in the Eastern Conference will either make the postseason outright or land a spot in the play-in round.

Saturday will be a vital day in the play-in race. The Brooklyn Nets visit the Atlanta Hawks in the most notable clash.

The Charlotte Hornets go on the road to face the Philadelphia 76ers for an afternoon clash. The Cleveland Cavaliers are also in action early versus the New York Knicks.

Cleveland has the easiest matchup on paper against the Knicks, who have nothing to play for. The Cavs have one win in their last six games and need to avoid more losses to slide closer to the bottom three seeds in the play-in standings.

The Cavs finish the regular season against Philadelphia, Orlando, Brooklyn and Milwaukee. A win over New York would go a long way in calming some fears of losing a home game in the play-in round.

Charlotte could get a vulnerable Philadelphia squad at the Wells Fargo Center. The Sixers are coming off a road loss to the Detroit Pistons on Thursday.

Philadelphia could use Saturday as a get-right game, and that could hurt the Hornets, or the struggles could continue and that would benefit the No. 9 seed.

The Hornets are guaranteed to at least remain in the No. 9 seed if they win on Saturday because Brooklyn or Atlanta has to drop one game.

Brooklyn has not won consecutive games since March 18 and 21, and it showed some defensive flaws in its last few losses. The Nets conceded at least 113 points in each of their last four defeats.

Atlanta eclipsed the 120-point mark in each contest of its four-game winning streak. All of those victories came by nine or more points.

The Hawks are surging at the right time, and a win over Brooklyn could force the Nets to play two games to get into the postseason.

What to know before accepting a location-based salary cut