Could the avian flu outbreak increase the cost of chicken? : NPR 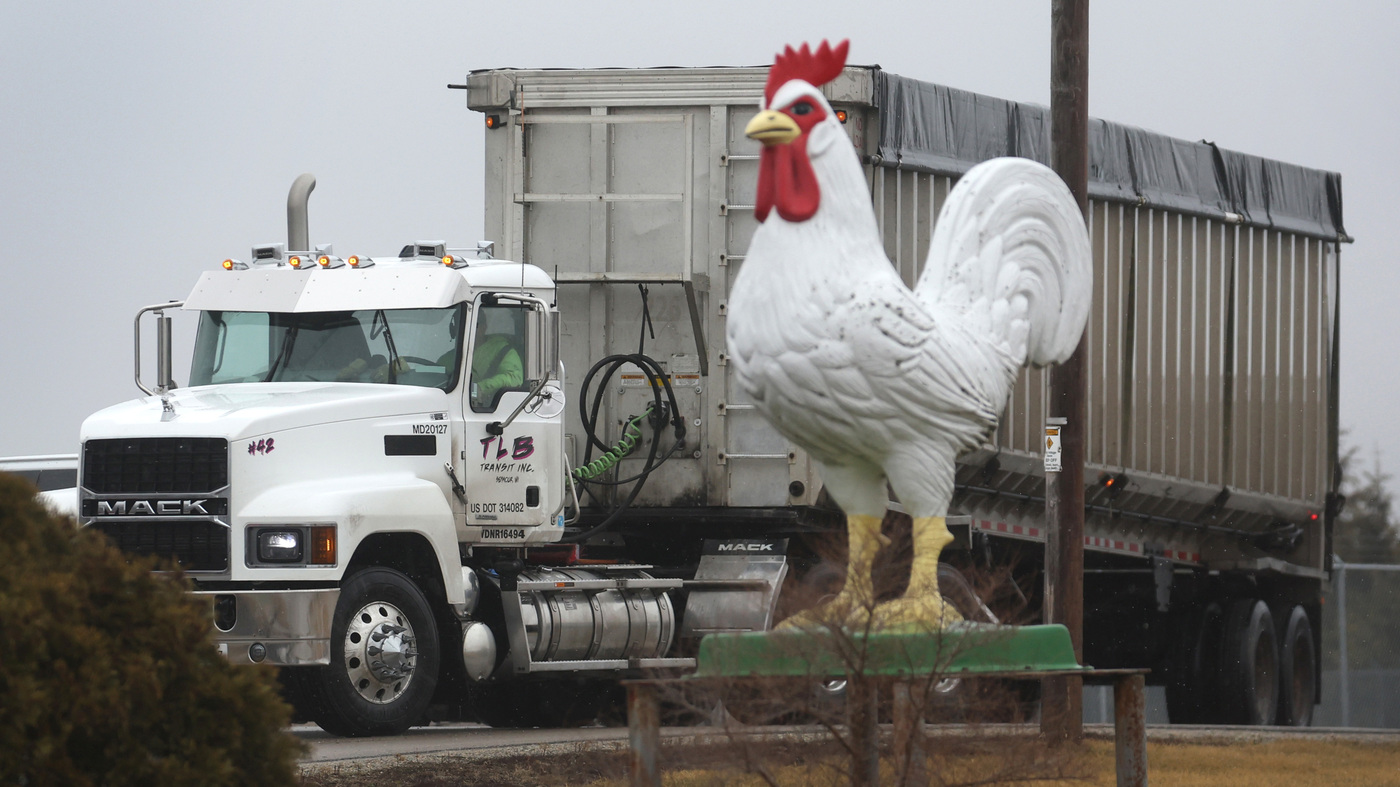 A truck drives out of a Wisconsin farm on Thursday where avian flu was detected, forcing the commercial egg producer to destroy more than 2.7 million chickens.

A truck drives out of a Wisconsin farm on Thursday where avian flu was detected, forcing the commercial egg producer to destroy more than 2.7 million chickens.

Ready for more bad infectious diseases news? There’s an outbreak of bird flu making its way into U.S. poultry flocks. If the virus continues to spread, it could affect poultry prices — already higher amid widespread inflation.

The price of chicken breasts this week averaged $3.63 per pound at U.S. supermarkets — up from $3.01 a week earlier and $2.42 at this time last year, the Agriculture Department says.

This week an outbreak was confirmed at a commercial flock in Nebraska, causing 570,000 broiler chickens to be destroyed. In Delaware and Maryland, more than two million birds at commercial poultry flocks have been affected.

In South Dakota, an outbreak last week led to the killing of 85,000 birds. An outbreak confirmed March 14 at a commercial operation in Wisconsin meant more than 2.7 million egg-laying chickens were killed.

The latest data from the USDA show 59 confirmed sites of avian flu across commercial and backyard flocks in 17 states since the start of the year. That figure includes chickens, turkey and other poultry.

The USDA identified a case of avian flu in a wild bird in mid-January, the first detection of the virus in wild birds in the U.S. since 2016. Wild birds can spread the virus to commercial and backyard flocks. By Feb. 9, the virus had been identified in a commercial flock in Indiana.

There have since been hundreds of confirmed cases of wild birds infected with avian flu.

The last major avian flu outbreak in the U.S. was from December 2014 to June 2015, when more than 50 million chickens and turkeys either died from highly pathogenic avian influenza (HPAI) or were destroyed to stop its spread.

During that outbreak, chicken breast prices increased 17%, according to agriculture data company Gro Intelligence. But at the same time, prices for cuts of chicken geared toward the export market actually dropped due to bans on importing U.S. poultry in countries including China, South Korea, Cuba and Mexico. So the cost of leg quarters, for instance, dropped 18%, according to the data. Poultry prices — especially for eggs and turkey — were affected for years, the company reports.

Whether the 2022 avian flu will affect the price of eggs and poultry depends on how widespread it becomes, says Ron Kean, a poultry science expert at the University of Wisconsin-Madison Department of Animal and Dairy Sciences.

“In 2015, we did see quite an increase in egg prices,” Kean told Wisconsin Public Radio. “The chicken meat wasn’t severely affected at that time. We did see quite a loss in turkeys, so turkey prices went up. So, we’ll see. If a lot of farms contract this, then we could see some real increases in price.”

What’s the risk to humans from this bird flu? Not much so far, says the Centers for Disease Control and Prevention.

According to the CDC’s most recent update on March 7, the H5N1 bird flu poses a low risk to the public, and is currently “primarily an animal health issue.” The CDC notes that some people may have job-related or recreational exposures to birds that put them at higher risk of infection.

You can’t get avian flu from eating poultry or eating eggs that are properly prepared and cooked, the USDA explains. The chance of infected poultry entering the food chain is extremely low, the agency says, because of its food inspection program and avian flu response plan.

“All poultry products for public consumption are inspected for signs of disease both before and after slaughter,” the USDA notes, and avian flu causes a rapid onset of symptoms in poultry.

For producers who suspect their flock may be affected by avian flu, the USDA has a guide to the warning signs, including a sudden increase in bird deaths, lack of energy and appetite, and a decrease in egg production. If a flock is found to be infected by bird flu, the USDA moves quickly — within 24 hours — to assist producers to destroy the flock and prevent the virus from spreading.

Older Americans are given the wrong idea about online safety