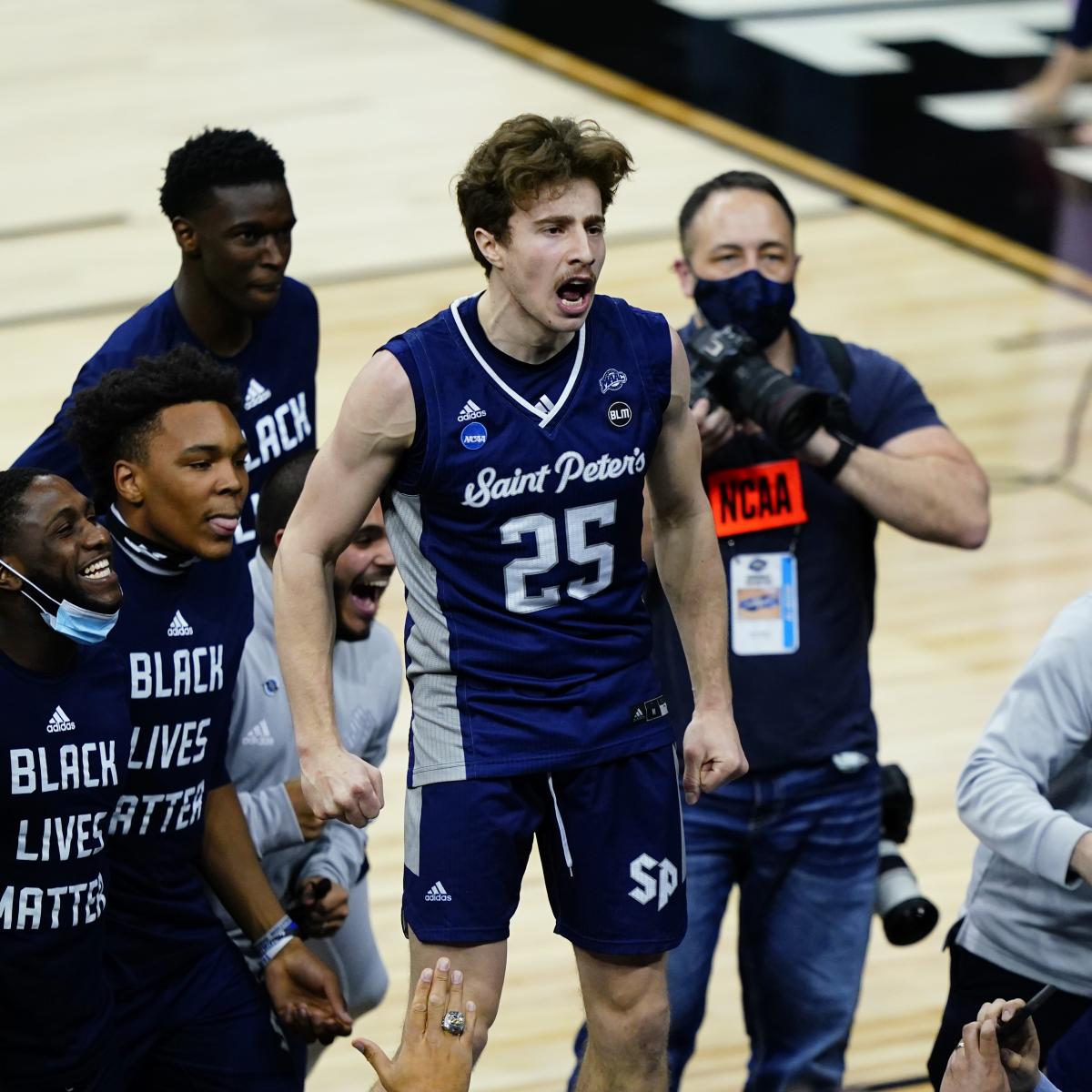 The Sweet 16 continued Friday night as eight more teams tried to punch their ticket to the Elite Eight.

In the night’s first matchup, this year’s Cinderella, No. 15 Saint Peter’s, took on the No. 3 Purdue Boilermakers. The Peacocks’ magical run continues, as they upset Purdue 67-64.

Obviously, the day’s biggest storyline is Saint Peter’s stunner, but a lot happened in all four matchups. So let’s run through the winners and losers of Friday night’s Sweet 16 games.

The monumental win for Saint Peter’s is the epitome of David vs. Goliath, and not just because of its tournament seeding.

The Peacocks also have one of the most underfunded college basketball programs in the country. According to Kevin Sweeney of Sports Illustrated, the school spends just $28,588 on recruiting expenses for all of its men’s sports programs. The school also made $0 from its men’s basketball program last season. That’s a huge disparity with a school like Kentucky, which made $11 million in 2021. Per Laine Higgins, Rachel Bachman and Jared Diamond of the Wall Street Journal, Saint Peter’s spent just $7.2 million on athletics in 2019-20.

Just an incredible story for head coach Shaheen Holloway and this team. The Peacocks will face No. 8 UNC on Sunday in the Elite Eight.

“Well, we’re happy,” Saint Peter’s guard Doug Edert told reporters after the game. “I mean, we’re happy, but don’t mistake, we’re not satisfied. We’re not satisfied at all. The job is not finished. We feel like we belong, and the more games we win, the more confidence we build. We have a great amount of momentum going into the next game.“

We’ll see if the Peacocks’ magic will carry over to the Elite Eight less than 48 hours from now.

The Kansas Jayhawks advanced to the Elite Eight Friday night with a 66-61 win over No. 4 Providence. Thanks to an early exit from No. 1 Baylor, and the losses Thursday night from fellow No. 1 seeds Arizona and Gonzaga, Kansas is the last top seed remaining.

Although the final score against Providence was relatively close, this game felt drastically different in the first half. Kansas held the Friars to their lowest-scoring tournament half ever—just 17 points to Kansas’ 26 before intermission.

Providence shot 7-of-35 from the field, but the Jayhawks weren’t drastically better—Kansas shot 12-of-34 in the opening 20 minutes. That’s 19-of-69 combined!

Midway through the second half, though, Providence started to make things interesting. The Friars cut it to a 41-40 Kansas lead on a three-pointer from Noah Horchler with 9:28 left. The game was tied at 46 with 6:35 left, and Providence finally took a 48-47 lead with 5:52 to go.

But the Jayhawks regrouped late down the stretch. Kansas forward Jalen Wilson converted a three-point play to put the Jayhawks back on top by two with 5:21 remaining. A Wilson steal capped off by a David McCormack layup made it 54-48 with 4:19 to play. The Friars were able to pull within four points a few times in the closing minutes, but Kansas ultimately staved them off.

With the victory, the Jayhawks advance to their 25th Elite Eight in school history. Kansas also surpassed Kentucky in all-time wins, earning its 2,354th on Friday.

Thanks to early exits from the likes of LSU, Tennessee and Kentucky, it seemed like the biggest flop of the tournament was the SEC. But it looks as if the Big Ten might be this year’s biggest tournament loser yet again.

With No. 3 Purdue’s stunning loss to Saint Peter’s on Friday night, the Big Ten officially has no more teams left in the tournament. At the start of the round of 64, the conference had a whopping nine teams. In fact, the Big Ten is the first conference in tournament history to send nine teams to the Big Dance.

Not a single Big Ten team advanced further than the Sweet 16. A brief breakdown of how each of the conference’s teams fared:

Now that no Big Ten teams are left in the tournament, the conference is still searching for its first national title since 2000. Not great, #B1G!

The North Carolina Tar Heels may be without head coach Roy Williams for the first time in almost two decades. But UNC is advancing to the Elite Eight following its 73-66 win over No. 4 UCLA on Friday night.

The Tar Heels trailed by three at the half and headed to the locker room down 31-28. But UNC’s offense hit its stride in the second half, scoring 45 points to win by 13. A big reason for UNC’s second-half surge was the stellar play of sophomore guard Caleb Love.

Although the St. Louis native had just three points in the first half, he scored a whopping 27 in the second half. He finished the night 11-of-24 from the floor and made six three-pointers on 13 attempts from beyond the arc. Love’s 30 points marked a season high for him, too.

The Tar Heels have found their groove in tournament play. Despite finishing the regular season 23-8, UNC upset Duke on the road in its final game before the start of the ACC tournament. Any momentum the Tar Heels had going for them after that convincing win at Cameron Indoor Stadium was short-lived, as they were bounced early by Virginia Tech in the conference tournament, which earned them a No. 8 seed.

In the NCAA tournament, however, the Tar Heels have been playing outstanding. They defeated No. 9 Marquette in the first round, followed by an overtime upset of No. 1 Baylor. Beating No. 4 UCLA should give the Tar Heels some confidence before facing a Cinderella Saint Peter’s team.

Thanks to No. 10 Miami, No. 8 UNC and No. 2 Duke advancing to the Elite Eight, all three teams have done a remarkable job silencing the ACC’s critics. In late March and around Selection Sunday, it looked like the conference was going to have a bad year.

For starters, it produced just five NCAA tournament teams, which is the lowest since four teams represented the conference in 2013. Big Dance regulars like Syracuse and Louisville, both of which had sub-.500 records, were also missing from the field of 64.

For a conference that boasted three of the last five national champions, things weren’t looking good. Early exits from the likes of Virginia Tech and Notre Dame could have been a bad omen for the conference.

But three of the eight teams remaining are from the ACC, and the conference is 11-2 overall in the tournament. That’s a pretty great accomplishment when considering that for 15 consecutive weeks, just one ACC team, Duke, was ranked in the Top 25. Even the Blue Devils caught flak after dropping their regular-season finale to an unranked UNC at home and getting bounced in the third round of the ACC tournament by Virginia Tech.

Critics be damned, now three of the last teams standing hail from the ACC—more than any other Power Five conference, including the Big Ten and SEC, which sent nine and six teams to the tournament, respectively.