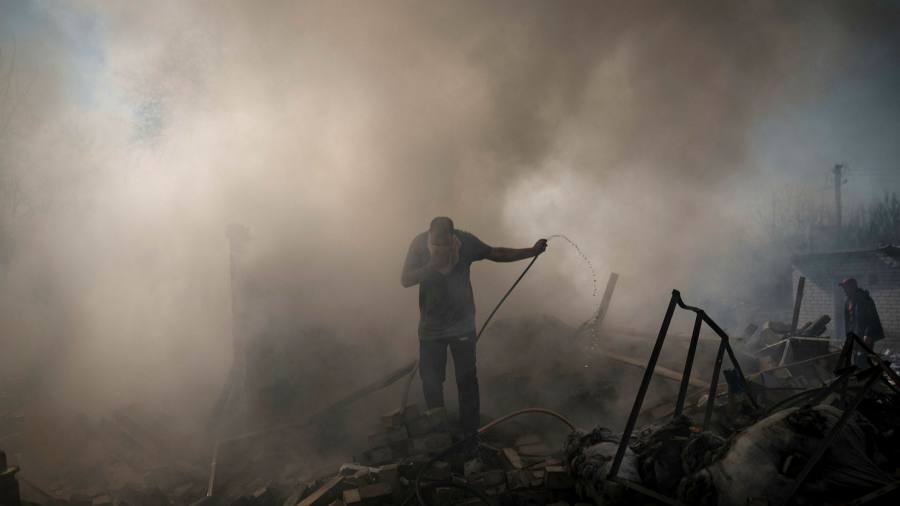 Joe Biden has said the US and its allies are prepared to respond with proportionate severity if Russia uses chemical weapons in its invasion of Ukraine, as he urged the west to remain unified in its response to the war.

The US president was speaking after he met Nato leaders to debate the response to the possible use of weapons of mass destruction by Russia, as well as military aid for Ukraine and tighter sanctions on Moscow.

The summit, called by Biden at short notice, was his first stop on a multi-day trip to Europe intended to fortify opposition to Putin’s war on Ukraine as the increasingly brutal invasion is set to enter its fifth week.

Thanks for reading FirstFT Europe/Africa. Send your feedback on today’s newsletter to firstft@ft.com — Jennifer

1. P&O chief admits breaking law Peter Hebblethwaite, chief executive of the ferry group, caused uproar as he admitted breaking the law by firing the company’s entire UK crew without notice or consultation. But ministers conceded that the government might have no means of legal redress.

2. Moshiri holds largest stake in Royal Liver Building Everton Football Club owner Farhad Moshiri holds the largest stake in the Liverpool building, which was put up for sale days after a longtime Russian associate of the British-Iranian businessman was hit with sanctions, according to a document seen by the Financial Times.

4. Fund houses buy up ‘alts’ specialists Traditional asset management groups are expanding offerings in alternative investments as they seek to boost profitability and head off competition from private equity giants.

5. Ethiopia declares ‘unilateral truce’ in Tigray conflict The government has declared what it calls a “unilateral truce” in its 16-month conflict with Tigray to allow food aid to get through to the blockaded northern region.

Elections German voters will head to the polls in the western state of Saarland tomorrow, as Malta holds a general election. On Sunday, Hong Kong will hold an indirect election of its chief executive by a 1,500-member Election Committee dominated by pro-Beijing interests.

And the Oscar goes to . . .  The ceremony for the 94th Academy Awards, the Oscars, convenes in Hollywood on Sunday. Read up on the nominees for the four main awards here.

What else we’re reading and listening to

Russia, Ukraine and Europe’s 200-year quest for peace As Russia’s invasion of Ukraine enters its second month, we find ourselves in a world many Europeans thought they had left forever — one of annexation and partition. What can today’s negotiators learn from centuries of statecraft?

Venture capitalists choose crypto start-up deals over board seats Founders of digital asset groups want to limit the involvement of outside backers, so a wide swath of largely unregulated projects such as “decentralised autonomous organisations” do not even have formal boards.

Rules for foreign owners of UK property The new requirement for overseas companies to declare real estate ownership could raise tax issues for some foreigners. Catch up on our explainer to avoid any legal disputes.

The problem with launching fantasy novels on Kickstarter Brandon Sanderson, a popular author of fantasy and science fiction, turned to the fundraising website and drummed up $30mn. Tim Harford is not tempted to do the same, though.

Does office romance make you a better worker? In the latest Working It podcast, host Isabel Berwick discusses the way organisations police office relationships. She is joined by the co-founders of a business who shared a romance before sharing assets.

The world still cannot get enough of Andy Warhol, the pop artist who was ahead of his time in producing multiple prints for elite collectors. John Gapper explores why.

The Week Ahead — Start every week with a preview of what’s on the agenda. Sign up here