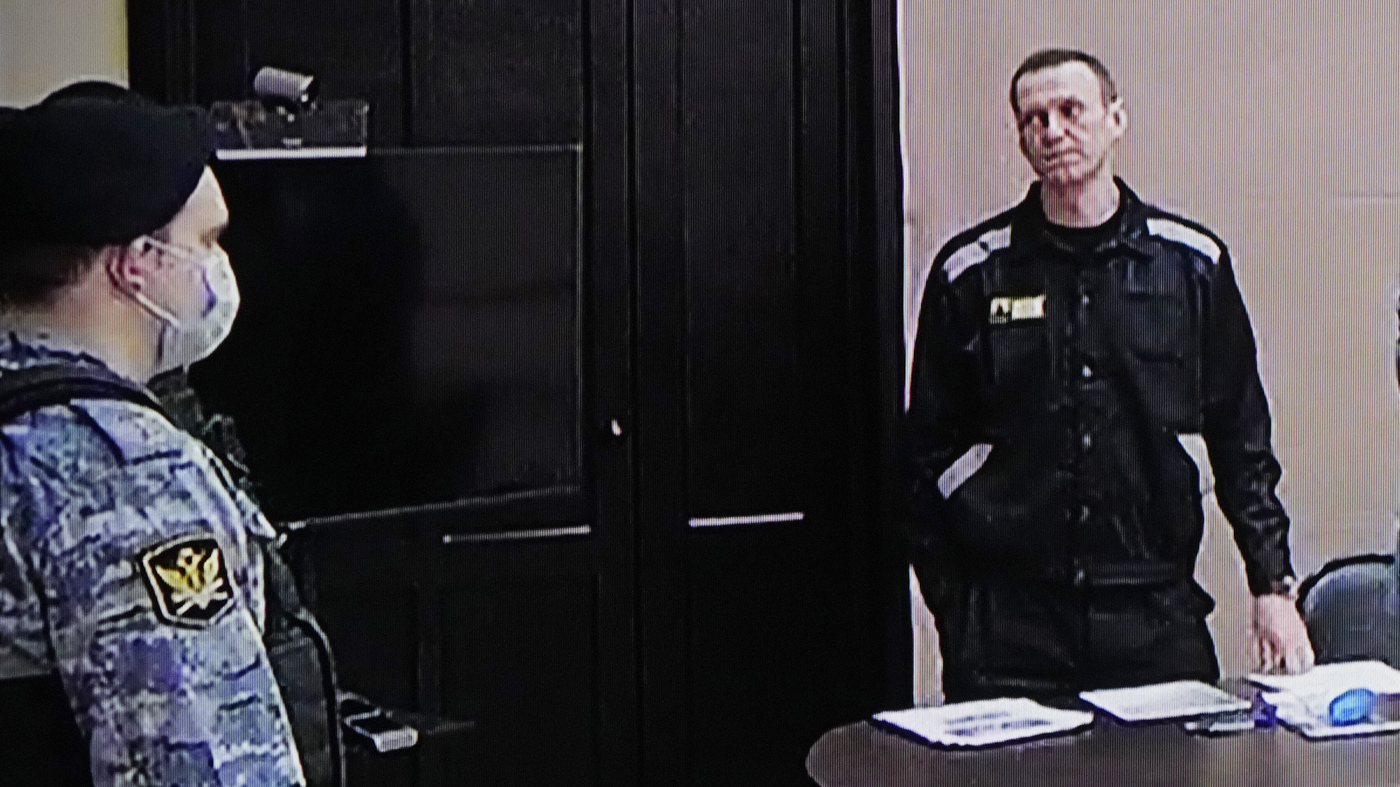 Russian opposition leader Alexei Navalny (right) is seen via a video link provided by the Russian Federal Penitentiary Service. Access to his trial has been limited.

Russian opposition leader Alexei Navalny (right) is seen via a video link provided by the Russian Federal Penitentiary Service. Access to his trial has been limited.

A Moscow court has found President Vladimir Putin’s most vocal critic guilty of fraud, according to Russian state media.

State-owned news agency TASS reported on Tuesday that Moscow’s Lefortovo Court found Alexei Navalny guilty of “fresh fraud charges.” It has sentenced the opposition leader, who is already in jail, to an additional nine years in a high-security prison.

“Navalny committed fraud, that is embezzlement of other people’s property through deception,” Judge Margarita Kotova read from the verdict, according to TASS. State news agency RIA Novosti reports that Kotova was promoted to a more senior judicial position by Russian President Vladimir Putin last week.

The court also charged Navalny with contempt of court, for what TASS said was defamation during a previous unrelated trial. Journalists from Russia’s independent Novaya Gazeta newspaper said Navalny’s lawyers were detained by police after the ruling.

Prosecutors in this trial — which is one of several criminal cases Navalny faces — accused him of embezzling money that he and his foundation raised over the years and of insulting a judge during a trial last year when he allegedly slandered the World War II vet.

Navalny has denied the allegations, and his supporters paint the case as an effort by the Russian government to keep him in prison for as long as possible.

Prosecutors had sought a sentence of 13 more years. AFP reports that the corruption charges carry a maximum penalty of 10 years, while contempt of court is punishable by up to six months. The court is also fining Navalny 1.2 million rubles, or $11,500.

Navalny appeared in court wearing a black prison uniform, listening closely as the judge read out the verdict and smiling at times, according to an AFP reporter who was present.

The trial took place in a makeshift court at a prison colony hours away from Moscow, where Navalny is already serving a two-and-a-half year sentence for parole violations. (His supporters say the trial’s location has limited media access to the proceedings, and his lawyers have said they were not allowed to bring cellphones or laptops with case files into the room.)

Navalny was detained in January 2021 upon returning to Moscow from Germany, where he was recovering from a nerve agent poisoning attack that he blames on the Kremlin. His arrest sparked widespread protests across the country. Russian authorities named Navalny and his top allies to its registry of terrorists and extremists earlier this year.

In a post issued to Twitter after the ruling, Navalny cited The HBO series The Wire about life in prison: “You only do two days. That’s the day you go in and the day you come out.”

Navalny said he had worn a T-shirt with that phrase in jail but prison authorities took it away because it was judged it to be “extremist.”

In a lengthy Telegram post, Navalny said his team will work to turn his Anti-Corruption Foundation into a “global international organization,” using part of his financial award for the the European Parliament’s 2021 Sakharov Prize.

“Words have power. Putin is afraid of the truth, I’ve always said this. Fighting against censorship, delivering truth to Russian people remain our priority,” he said.

Navalny thanked people for their support, then added: “The best support for me and other political prisoners is not sympathy and kind words, but actions. Any action against Putin’s lying and thieving regime. Any resistance to these war criminals.”

The verdict may endanger Navalny further

Navalny’s spokesperson, Kira Yarmysh, shared details about the trial and the fraud and contempt accusations in a series of tweets on Monday.

She said that Navalny was accused of insulting a judge during a previous trial because he used phrases such as “Oh my god” and “This case is fabricated,” adding that the prosecutor’s expert — who works as a math teacher — reasoned it was not the words he said but the intonation he used that was offensive.

Explaining the fraud charge, she said Navalny is accused of spending the money people gave to his organization (which fights corruption) on extremist and illegal activity, and that out of hundreds of thousands of donors, the government could only get four people to testify against him.

She said all were forced to testify by Russia’s Investigative committee through “deceit or pressure,” and one dropped his claims in court. Another witness also retracted his previous testimony during the trial, she added.

Yarmysh concluded by saying that if Navalny could eventually be considered a “recidivist,” which will allow authorities to transfer him to a high-security colony much farther from Moscow and with stricter conditions. She said it would be “practically impossible” to keep in contact with him there.

“Without public protection, Alexei will be face to face with those who have already tried to kill him. And nothing will stop them from trying again,” she wrote. “Therefore, we are now talking not only about Alexei’s freedom, but also about his life.”

She added that while the world’s attention is focused on Russia’s aggression in Ukraine, “another monstrous crime is being committed inside of Russia.” She urged people to spread the word about Navalny’s case.

This story originally appeared in the Morning Edition live blog.