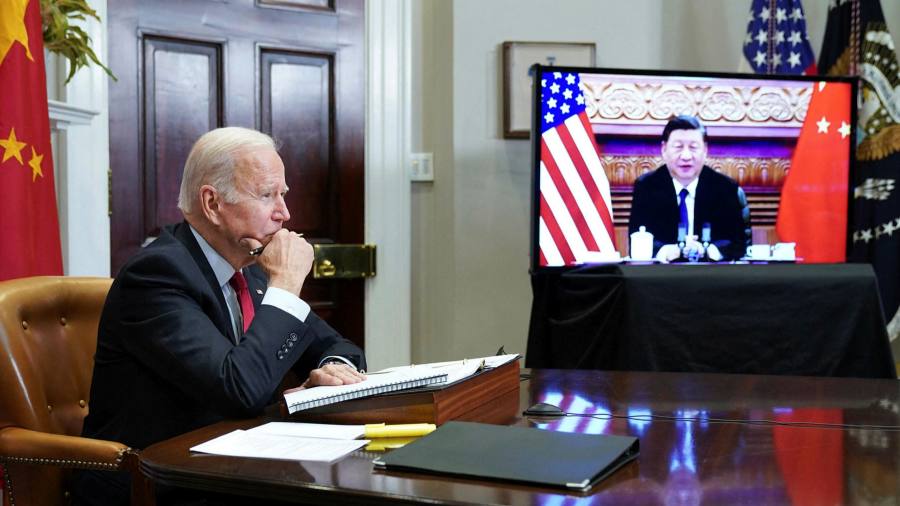 
US president Joe Biden will warn Chinese leader Xi Jinping in a telephone call on Friday that Washington could retaliate against Beijing if he acts to support Vladimir Putin’s war in Ukraine, according to senior American officials.

The conversation, which will take place on Friday morning US eastern time, could represent a pivotal moment in the diplomacy surrounding Russia’s invasion and comes as US officials become increasingly concerned about China’s possible willingness to assist Moscow in the conflict.

“This is an opportunity for President Biden to assess where President Xi stands,” Jen Psaki, White House press secretary, told reporters on Thursday.

Antony Blinken, the US secretary of state, added that Biden would “make clear that China will bear responsibility for any actions it takes to support Russia’s aggression, and we will not hesitate to impose costs”.

The Financial Times reported this week that Russia had requested several categories of weapons, including drones, from Beijing. Blinken confirmed that Washington was worried China was “considering directly assisting Russia with military equipment” for use in Ukraine.

While Beijing publicly claims to have a neutral stance on the conflict, the US is concerned the country is moving closer to supporting Russia.

China has also avoided describing the war as an “invasion”, referring instead to the Ukraine “issue” or “crisis”.

“The fact that China has not denounced what Russia is doing, in and of itself, speaks volumes,” she added.

The Biden administration is also paying close attention to whether China helps Russia circumvent the sanctions the west has imposed on Putin and his regime.

At a meeting in Rome on Monday, Jake Sullivan, US national security adviser, told his Chinese counterpart Yang Jiechi that Beijing would face consequences for bailing out Russia.

Xi issued a statement last month with Putin in which the leaders described their growing partnership as having “no limits”.

China has called for talks between Kyiv and Moscow. Dmytro Kuleba, Ukrainian foreign minister, signalled in early March that Beijing could play a role as a mediator after speaking with Wang Yi, his Chinese counterpart.

But Beijing has opposed sanctions and consistently blamed Nato and the EU for pressuring Putin ahead of the war. Chinese diplomats and state media have also repeated Russia’s disinformation reports that the US was using Ukraine to research dangerous biological weapons.

Zhao Lijian, China’s foreign ministry spokesperson, told reporters on Thursday that the country’s “clear” aim was to work for de-escalation and end the conflict as soon as possible.

“We hope the US and Nato, the culprits of the crisis, can reflect upon their roles in the Ukraine crisis,” Zhao said.

The call is only the fourth interaction between Biden and Xi and follows their virtual meeting in November, when the US president told the Chinese leader the two had a responsibility to make sure that competition did not “veer into conflict”.

The White House concluded last autumn that it was important for Biden to speak directly to Xi due to concerns that messages to his top officials were not being properly relayed to the Chinese president.