In Texas, an assault on trans rights takes a mental toll : NPR 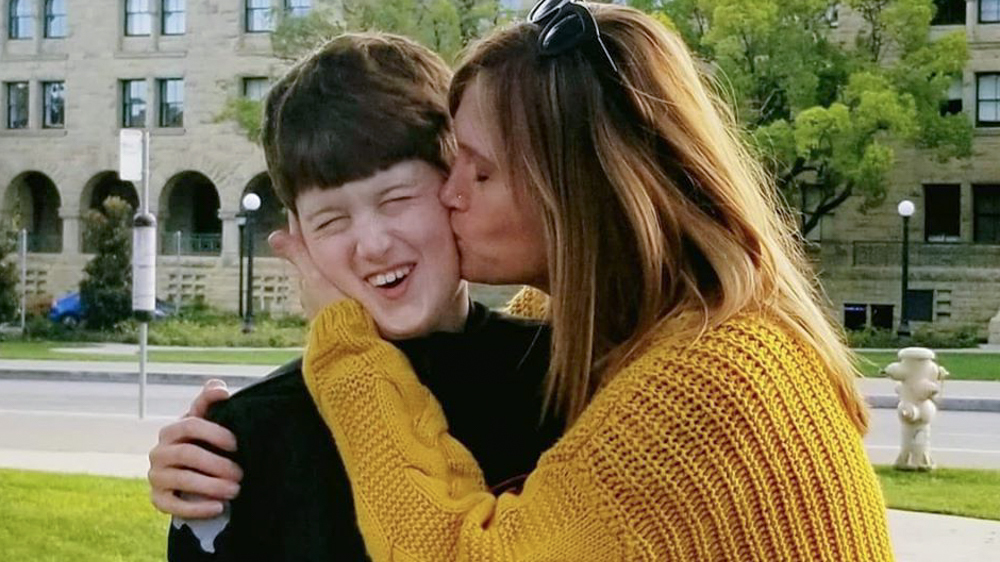 Texas resident Amber Briggle kisses her son. She says the onslaught of anti-trans legislation in the state is emotionally traumatizing.

Texas resident Amber Briggle kisses her son. She says the onslaught of anti-trans legislation in the state is emotionally traumatizing.

For Amber Briggle, raising her 14-year-old trans son in Texas means packing lunches, coordinating rides to extracurriculars and planning sleepovers. Usually, it’s just like raising any other kid in America — except for when it’s a legislative year.

Legislative sessions in the state, which can last up to 140 days every two years, can be exhausting, she told NPR.

“It’s emotionally traumatizing,” Briggle said. “I’ve been seeing a therapist for years so I don’t cry in front of my kids over things that they shouldn’t have to worry about.”

Anti-trans rhetoric in Texas has grown louder in the past few weeks. Attorney General Ken Paxton — who broke bread with Briggle’s family years back — issued an opinion that likened gender-affirming surgery — a procedure that gives transgender people a body that aligns with their gender identity — to child abuse.

Days later, Gov. Greg Abbott doubled down with a letter calling on professionals, including teachers and doctors, to report parents who give their children gender-affirming care. The letter added that there would be similar reporting requirements for the general public, and consequences for those who don’t report.

But Adri Pérez, a policy and advocacy strategist at the ACLU of Texas, emphasized that neither the letter nor the opinion are legally binding. No one has a legal duty to report someone receiving gender-affirming care, they added.

“They have no legal effect, and they cannot curtail anyone’s constitutional rights,” Pérez told NPR. “The attorney general and the governor can share their opinions, but it is just their partisan opinion that have been created to target transgender kids and their families.”

But the message is clear, said Emmett Schelling, the executive director of the Transgender Education Network of Texas.

“The state leadership has said, ‘We would rather see dead children … instead of happy, loved, supported, thriving trans kids that are alive and well,’ ” Schelling told NPR.

Texas, among other states, has seen lawmakers propose dozens of anti-LGBTQ bills. More than 40 proposed bills in Texas targeted trans and nonbinary youth in 2021.

As states pushed to criminalize gender-affirming care, the American Medical Association sent a letter to governors in April urging them to oppose state laws that would ban gender transition-related care. The American Academy of Pediatrics released a statement Thursday expressing its ongoing support for gender-affirming care for transgender youth.

And as conversations mounted, the Trevor Project — an organization dedicated to suicide prevention for LGBTQ youth — received more than 10,800 total crisis calls, texts and chats from LGBTQ youth in Texas looking for support between Jan. 1 and Aug. 30, 2021. More than a third of those crisis contacts came from transgender or nonbinary youth.

For Pérez, gender-affirming care was life saving. Gender dysphoria, the distress someone might experience if their gender doesn’t match their sex, can lead to helplessness. And helplessness leads to depression and suicidal thoughts, they said.

“It is a helpless and hopeless feeling that you may not be able to access the care that you need to live as you truly are,” Pérez said.

Between 2020 and 2021, the Trevor Project saw a 150% increase in crisis contacts from LGBTQ youth in Texas seeking support. While the volume of contacts can’t be attributed to one factor, an analysis found that transgender and nonbinary youth “are feeling stressed, using self-harm, and considering suicide due to anti-LGBTQ laws being debated in their state,” the organization said.

Amber Briggle’s son holds up a sign that reads “My parents are not child abusers.”

Amber Briggle noted that 2020 marked the onset of the pandemic in the U.S — it shut down schools, eliminated birthday parties and limited visits to grandparents, among other things.

“And yet these anti transgender bills the Texas legislature was so hell-bent on passing was more detrimental to these kids’ health than a global pandemic,” she said.

Staying put and pushing for the Equality Act

As Abbott’s latest letter comes comes on top of anti-trans legislation, some Texas families with trans kids are looking to leave the state. But not everyone has the means to move, and relocating wouldn’t make the attacks stop, she said. And staying in the state — and showing that trans-inclusive families exist — is how she fights back.

Now Briggle’s eyes are on the federal Equality Act, which would expand Civil Rights Act protections to cover discrimination based on sex, sexual orientation and gender identity. It’s a way for allies in blue states to help red states, she said. She urges transgender allies across the country to call their senators to get it passed.

“It’s imperative that people stand up and fight against this,” Briggle said. “My kid matters, too.”