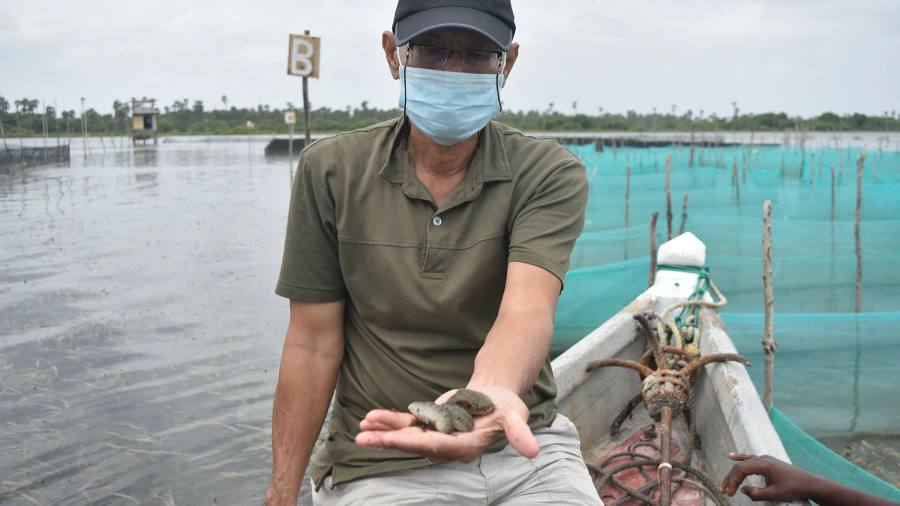 
Kandasamy Kalamohan had grown tired of the trawlers that he and his fellow fishermen alleged crossed into northern Sri Lankan waters from India, about 50 miles away, destroying their prawn nets and depleting their supplies of tuna and cuttlefish.

So last year, he joined a nascent, fast-growing industry: sea cucumber farming. Supplied by a nearby Chinese-owned hatchery, he grows the barrel-shaped creatures that live on the bottom of the sea in his aquatic farm for export to China, where the delicacy sells for hundreds of dollars per kilo.

“Because of the Indian trawling, there are fewer fish in the sea,” said Kalamohan, 48, who previously owned two small fishing boats. “I wanted to start something on my own and this is a very profitable business.”

M Thivagaran, president of the Jaffna Sea Cucumber Cultivators’ Association, said the number of farms rose from about 40 to 250 last year, with the shallow northern waters well suited to sea cucumber cultivation. Although modest in size, the ventures have unexpectedly stoked a growing power contest between India and China in the strategic island nation of 22m.

Sri Lanka’s north, scarred by a 26-year civil war that ended in 2009, has long been culturally as well as geographically close to India, with Tamil people living on both sides of the Palk Strait. Despite making extensive diplomatic and economic inroads in Sri Lanka, China has largely stayed away from the north.

But recent Chinese interest in the region has raised tensions between Beijing and New Delhi, which are also engaged in a military stand-off on their Himalayan border 2,000 miles away.

In December, China’s ambassador Qi Zhenhong made a rare tour to the region, visiting Chinese businesses including a sea cucumber hatchery and distributing rations to fishermen affected by Indian trawling. The visit alarmed New Delhi when the delegation flew a drone at one of the closest points to the Indian coastline.

Many locals, however, see Chinese ties as a lucrative opportunity in a neglected region.

“We welcome whoever is interested in investing, creating jobs and getting the return as well,” said Angajan Ramanathan, MP for the northern city of Jaffna, who is allied with President Gotabaya Rajapaksa’s government. “Jaffna has caught the attention of a lot of people . . . We need [Chinese] expertise and technology.”

“Our people are hungry, and we don’t mind who helps us, whether it’s India or China,” said Annalingam Annarasa, president of the Jaffna Fisheries Federation. “China realised our difficulties and came up with help.”

Sri Lanka has ties with India and China going back hundreds of years. Both Delhi and Beijing compete furiously for influence through lobbying, loans and arms sales. Their rivalry in Sri Lanka “is the most transparent and the most bare-knuckle” of any nearby country, said one diplomat. “Over the past year, it has evolved in a drastic way.”

Chinese investment has taken off through its Belt and Road Initiative. China has become one of Sri Lanka’s largest creditors, with at least $3.5bn of outstanding loans, and controls the Hambantota port on its southern coast, near some of the world’s busiest shipping lanes.

Critics have accused Chinese loans of pushing Sri Lanka into a debt crisis from which it is struggling to emerge, and Sri Lanka last month asked China to restructure its debts. India has responded with a diplomatic counter offensive, providing about $1bn of assistance and hosting Sri Lanka’s foreign minister this month.

Some observers were sceptical that China would be able to convert its recent outreach in the north of the country into the large-scale activity it has made elsewhere.

Northern Sri Lanka was the centre of the devastating war in which Tamil separatists fought for independence from the island’s Sinhalese majority. As many as 100,000 people died before Tamil fighters were crushed in an operation led by then-military chief Gotabaya.

The north remains among Sri Lanka’s least developed regions and locals decry the lack of a political settlement after the conflict. There is also deep resentment towards China, which backed the Rajapaksa government, then led by Gotabaya’s brother Mahinda, during the conflict.

P Mathan, head of the nearby Passaiyoor Fishermen Federation, who has organised protests against Chinese investments, said: “As long as I’m president, the Chinese won’t be allowed to come here.”

India has also intervened to keep China away. Shortly before the ambassador’s visit, China announced that India had successfully lobbied to suspend a renewable energy project off the Jaffna coast owing to security concerns.

But India also faces resentment, most vocally from local fishermen who accuse its trawlers of destroying their livelihoods. The years-long dispute has escalated in recent months with dozens of Indian fishermen arrested by Sri Lanka and two Sri Lankans reportedly killed in clashes at sea.

“How can we survive if these people come and take what we need to make a living?” said S Pakeekaran, a 26-year-old prawn fisherman at a protest in Jaffna. “The Indians come with a free hand, rob our fish and go.”

While wild sea cucumbers have long been harvested in the area, export-oriented farming has accelerated in the past year. The creatures, which can grow to full size in a matter of months, are shipped to Hong Kong or Singapore and sold on to mainland China, where they are prized for their chewy skin and soft interior. 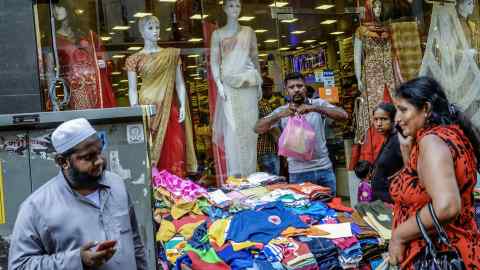 At least 400 more fishermen have applied for permits to set up sea cucumber farms, and the Chinese-owned Gui Lan sea cucumber hatchery is busier than ever.

But Steven Gong, one of the partners, is bemused at the geopolitical furore. Gong, who is from Taiwan and has lived in Sri Lanka for three decades, runs the hatchery with several other partners and investors from mainland China.

They are yet to turn a profit and live for months at a time in a modest seafront cabin where they cultivate the baby sea cucumbers. But with a fast-growing client base and strong demand from China, Gong is bullish.

“Everyone knows the sea cucumber market in China has high prospects,” he said. “There’s been a lot of sacrifice . . . I can see the future of this investment and I’m very confident.”