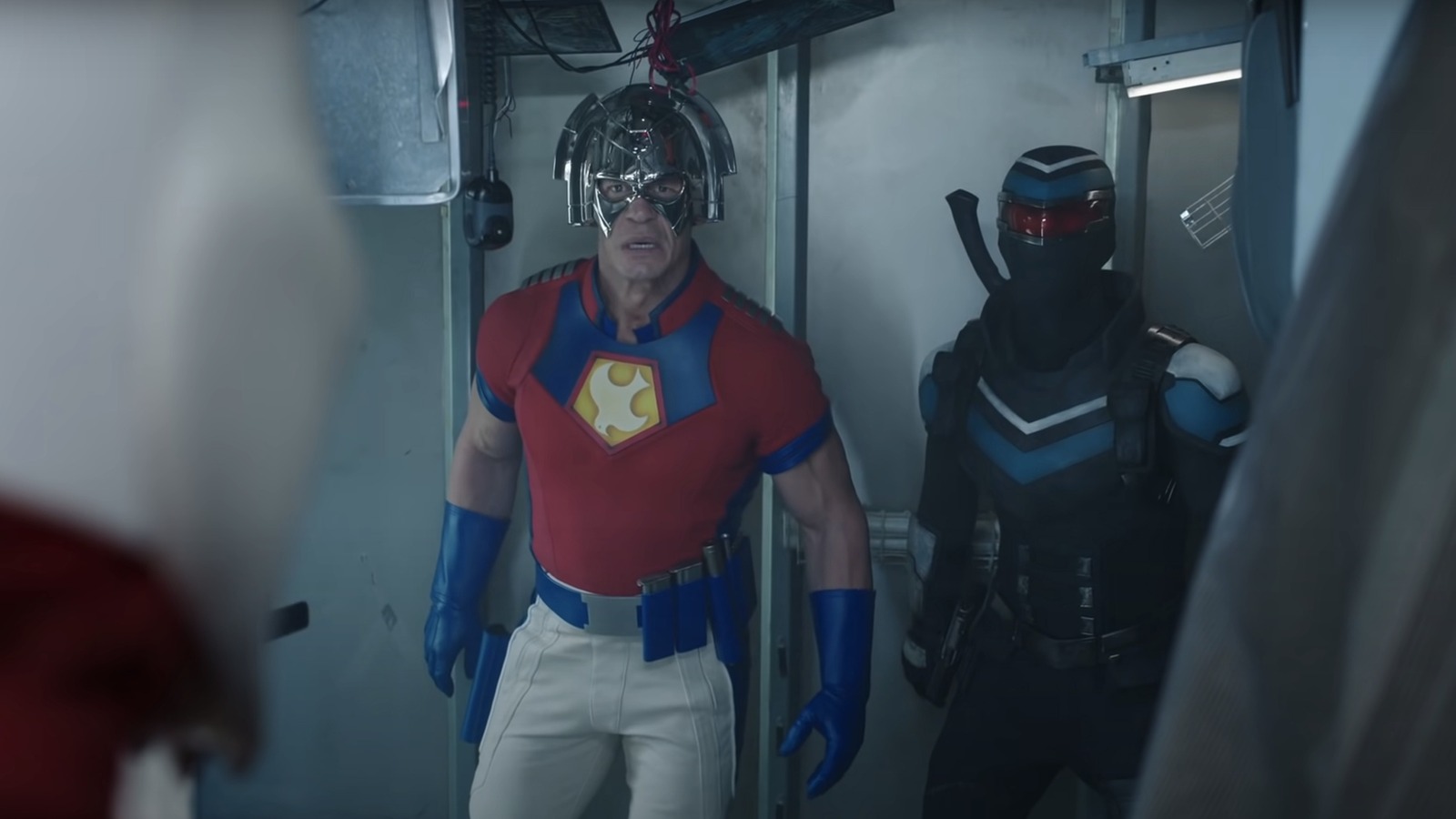 
After discovering that the cops have the diary Adebayo planted, Chris goes into the bathroom to have a pretty understandable panic attack about the whole thing. He flashes back to his brother’s death, and we see the full scope of the situation for the first time. Auggie (Robert Patrick), Chris’s dad, was pitting him against his older brother Keith in bare-knuckle fights, with a whole slew of adults betting on them. Chris punches Keith and he hits his head, going into a seizure. Keith dies and Auggie blames Chris, even though it was clearly an accident that happened because of Auggie’s horrible parenting. Peacemaker ends up piecing together that Adebayo (Danielle Brooks) planted the diary and starts storming through the hideout, noticing that Judomaster (Nhut Le) is missing without really caring. He knows that he and Vigilante (Freddie Stroma) need to find somewhere better to hide, and fast.

Meanwhile, Harcourt (Jennifer Holland) shows up at Adebayo’s motel room to give her a piece of her mind. She asks Adebayo how she could possibly “lone shooter the poor bastard,” and reminds her that Peacemaker was her friend. Adebayo snaps back about the confusing morality of it all, and thankfully Murn shows up to let them know the s*** has hit the fan. He already knew that Adebayo was Waller’s daughter and didn’t really care, and he starts getting the crew ready to go somewhere safe. Outside, Judomaster is having a spicy Cheeto snack and two chuds make fun of him for his appearance. He ends up beating up one of the guys before the other runs off, and gets a thumbs up from the convenience store cashier inside.

Vigilante, Peacemaker, Eagly, and John Economos (Steve Agee) are headed toward the rest of Project Butterfly in the team van when suddenly Auggie attacks in his White Dragon costume. His suit has most of the same powers as Iron Man’s super-suit, so Vigilante, Peacemaker, and Economos really have their work cut out for them. Vigilante pulls a grenade and yells “there is no time to rock,” giving Peacemaker and Economos a chance to escape. Thankfully, our favorite little sociopath survives and manages to steal the car the White Dragon’s cohorts came in because one of them left the keys in the ignition. Peacemaker ties his helmet to a raccoon upon realizing that his dad is tracking him through the device, and this helps them manage to evade the white supremacists, at least for a little while.

While Peacemaker and company deal with the White Dragon, the butterfly-infested police force descend upon the motel. They come upon Murn (Chukwudi Iwuji) first, who uses a zip-tie to lock his walkie-talkie into the on position for one last pep talk with Harcourt and Adebayo. He tells them he’s proud of them and that they need to “kill the f***ing cow,” then Sophie Song (Annie Chang) shoots him in the head. The butterfly inside of Murn manages to escape, but Song grabs him and crushes him with her bare hand. The Fitzgibbon (Lochlan Munro) butterfly is shocked, telling Sophie “you murdered him.” Adebayo and Harcourt get to Murn after the other butterflies leave, and he holds out his little bug arm to try to touch Harcourt as she picks up his broken body. I’m not crying over a dead bug, someone’s just cutting onions in here.

The sad moment doesn’t last, however, as Judomaster shows up in the doorway with a feisty “ding dong, b****es!” Harcourt and Judomaster have a knock-down, drag-out brawl that ends when Adebayo tasers Judomaster in the neck. While Harcourt and Adebayo deal with Judomaster, Peacemaker finds Vigilante passed out at the wheel of the stolen car. They all sneak away, but unfortunately, Vigilante had saved all of Peacemaker’s helmets and put them in the trunk, which means that the White Dragon is going to be hot on their tail. While Peacemaker’s getting rid of the helmets, Eagly escapes and Economos has to try to get him back in the car by shaking a bag of Doritos. Unfortunately, that helps the klansfolk working with the White Dragon figure out where they are, and they all come out of the woods.

The White Dragon tells Peacemaker that he should have killed him 40 years ago, much like he has in previous episodes. Vigilante stabs him in the neck, yelling about the gaps in the armor, which shorts out White Dragon’s weaponry. Economos starts mowing down the hooded henchmen with a machine gun, giving Peacemaker the chance to go after his dad. Peacemaker starts screaming at Auggie, who throws slurs in his face. Eventually, Peacemaker shoots his dad in the forehead with a pistol, then breaks down and begins to sob. Vigilante teases him about doing his face exercises and then attempts to console him, in typically awkward Vigilante fashion.

Back at the motel, Adebayo helps Harcourt with her wounds from fighting Judomaster. They discuss the past, and Adebayo reveals that she ran a dog shelter that lost funding before taking this job for her mother. The two have a nice bonding moment, then the whole crew meets up at a local vet clinic to stitch up Eagly, who was injured in the battle with White Dragon. Vigilante wants to kill the vet techs and veterinarian but is talked out of it by the rest of the team. Adebayo goes out into the hallway to call her wife and sees Peacemaker praying over an unconscious Eagly. The eagle eventually stands up and hugs Chris, and Adebayo witnesses the moment, deciding that it’s a sign she should stay and help the team finish their mission.

The group unanimously and silently decides that Harcourt is now the leader, and she explains “the cow” to the whole team. The butterflies have some kind of alien cow that creates their food, the “amber goo” we’ve seen throughout the season. There’s only one on the planet, and without it, the butterflies will die. Unfortunately, they now know that Project Butterfly knows about the cow and will try to move it immediately, so they have to get a move on if they’re going to ever stop the butterfly invasion. They all unite to go take out the cow, but the camaraderie is gone. Peacemaker feels betrayed by Adebayo, who was the first real friend he’s ever had besides Vigilante and Eagly, and the rest of the team are exhausted. He’s also grieving his father, who he killed just moments before, so it’s understandable that he’s a little touchy.

Things aren’t looking great for Project Butterfly, and they’re going to need to figure out how to be a team again if there’s any chance of saving the world.