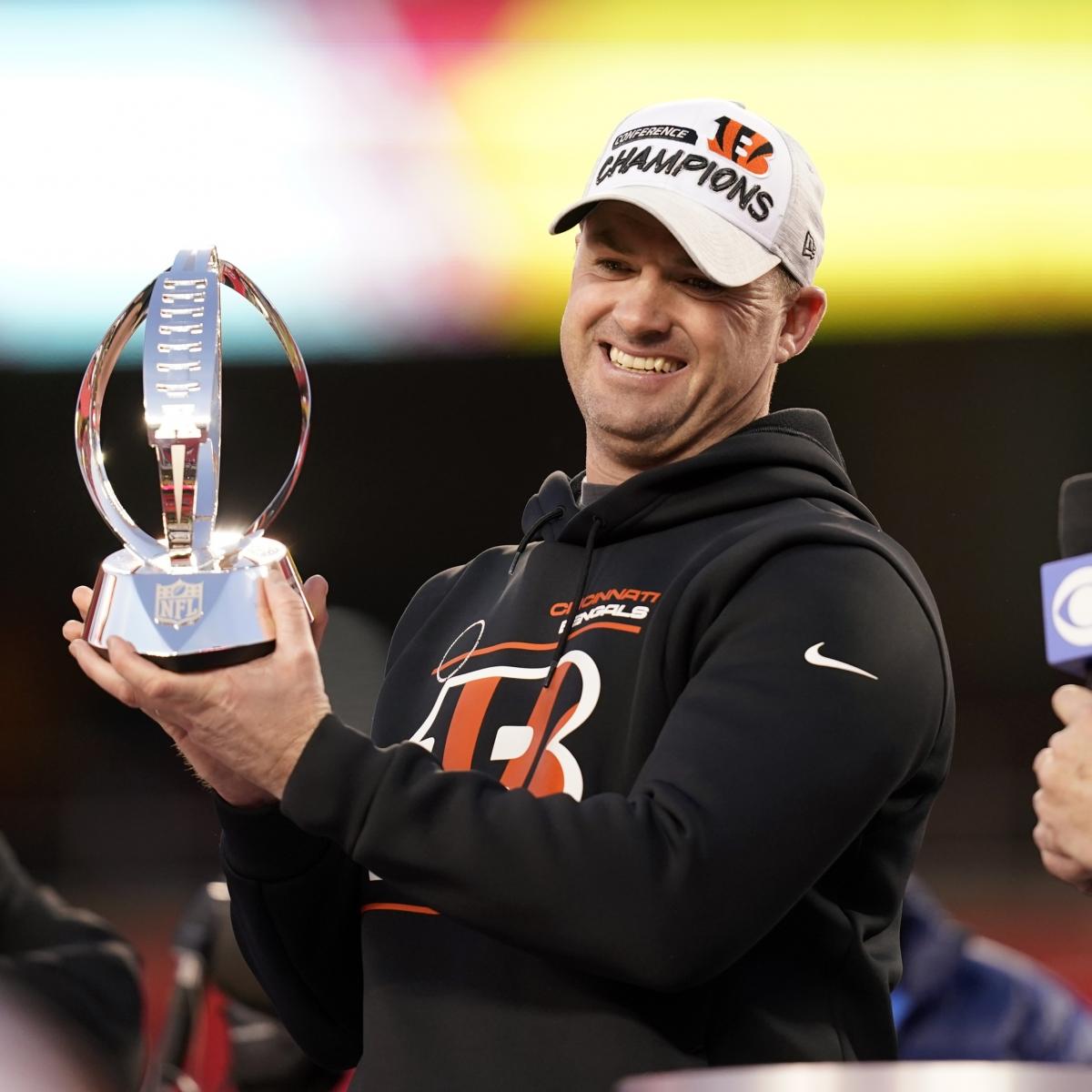 Following a must-watch divisional round of the playoffs, the final four teams squared off in a couple of nail-biters that came down to game-winning field goals in the conference championship matchups.

Joe Burrow isn’t just the future of the league; he’s part of the playoff-competitive present. The 2020 No. 1 overall pick is the first quarterback selected first in the draft to reach the Super Bowl by his second season, leading the Cincinnati Bengals to their third title game in franchise history.

The Bengals pulled off an absolute stunner in the AFC Championship Game with a road win over the Kansas City Chiefs in comeback fashion. How did the underdogs come out on top?

In the NFC championship battle, the Los Angeles Rams beat the San Francisco 49ers for the first time since the 2018 campaign. What helped them get over the hump in a high-stakes contest?

Let’s discuss the biggest takeaways from the conference championship games.

This past offseason, the Rams traded quarterback Jared Goff, two first-round picks (2022 and 2023) and a third-rounder in last year’s draft for Matthew Stafford, and he delivered in the postseason.

Through the first two playoff rounds, Stafford avoided turnovers, throwing for four touchdowns, two in each game against the Arizona Cardinals and Tampa Bay Buccaneers.

Last week, the Rams nearly squandered a 27-3 lead to the Buccaneers, but Stafford connected with wideout Cooper Kupp for a pair of big-time completions on the final drive to set up Matt Gay for the game-winning field goal.

After a costly red-zone interception during the first quarter, Stafford had a strong performance in the NFC Championship Game, throwing for 337 yards and two touchdowns along with the turnover.

Against San Francisco, Los Angeles struggled to move the ball on the ground, finishing with just 70 yards on 29 rush attempts. Stafford carried the offense and successfully put his team in a position to win the game. Kupp and fellow wideout Odell Beckham Jr. became the first pair of Rams pass-catchers to each eclipse 100 receiving yards in the same playoff game since Hall of Famer Isaac Bruce and Torry Holt did it in Super Bowl 34.

Stafford elevated a Rams offense that ranked 22nd in scoring with a middling aerial attack (13th) last year. For the 2021 campaign, the unit ranked seventh in points with the fifth-ranked passing offense. He turned a playoff-caliber team into a Super Bowl contender.

Jimmy Garoppolo pushed through the playoffs with a thumb injury and didn’t have his best showing, but he’s helped lead the 49ers to the NFC Championship Game twice in the last three years.

Garoppolo’s passing numbers this postseason look pretty pedestrian on paper. He threw for 535 yards, two touchdowns and three interceptions—logging both of his scores against the Rams.

Regardless of Garoppolo’s playoff success, many expect the 49ers to move forward with rookie quarterback Trey Lance, whom the team moved up to select with the No. 3 overall pick in the 2021 draft. He threw for five touchdowns and two interceptions and rushed for a touchdown in six contests (two starts).

After Sunday’s game, when asked about his future with the 49ers, Garoppolo told reporters, “We’ll see what happens in these next couple days, weeks, whatever. But I love this team.”

General managers may not consider Garoppolo a reliable franchise quarterback because of his injury history (25 games missed since 2018) and occasional ball-placement issues, but he’s good enough to take over in a stopgap scenario or lead a balanced team to the playoffs similar to the 49ers.

In 2022, Garoppolo has a cap hit of about $27 million, per Over The Cap, but clubs can restructure his deal with more years added to his expiring contract.

Cincinnati went into Sunday’s game against Kansas City as a seven-point underdog. Few analysts and media outlets picked the Bengals to pull off the upset, but they rallied in the second half to punch their ticket to Super Bowl LVI.

The Bengals fell behind 21-3 late in the second quarter, but quarterback Patrick Mahomes made a critical mistake that allowed Cincinnati to build momentum going into halftime. With five seconds left in the half, he tossed a pass, behind the line of scrimmage, to wideout Tyreek Hill that burned the remaining seconds off the clock. The Chiefs scored touchdowns on three of their four possessions through two quarters.

Over the next two quarters, the Bengals battled back. They scored 21 unanswered points and held the Chiefs to three points in the second half and overtime. After a red-hot first half in which he threw three touchdowns with three incompletions, Mahomes tossed two interceptions.

Quarterback Joe Burrow deserves credit for engineering the game-tying drive that concluded with a successful two-point conversion and his ability to keep plays alive behind a shaky offensive line, but Cincinnati’s defense came up huge as well.

Defensive tackle B.J. Hill’s interception set up the offense on a short field, which led to the game-tying score in the third quarter. In overtime, safety Vonn Bell’s interception allowed Cincinnati to seal the victory with a field goal.

En route to the title game in Los Angeles, the Bengals have knocked off a Las Vegas Raiders squad that went on a four-game winning streak heading into the postseason, the No. 1-seeded Tennessee Titans and the Chiefs, who played in their fourth consecutive AFC Championship Game at home.

The Bengals have a young nucleus under contract beyond this campaign. With Burrow, Joe Mixon, Ja’Marr Chase and Tee Higgins on offense along with Trey Hendrickson, Sam Hubbard, Logan Wilson, Mike Hilton and Bell on defense, Cincinnati looks like a contender—not an underdog—for years to come.

The Chiefs’ inability to score at the end of the first half didn’t cost them the game.

We have to credit the Bengals defense for limiting an explosive offense that finished fourth in scoring in the regular season and racked up 42 points in an overtime game against the Buffalo Bills’ No. 1-ranked defense last week. Cincinnati stifled Mahomes in the second half, allowing 55 passing yards and logging two interceptions in addition to four sacks.

“I was hoping we could get the ball in the end zone,” Reid told reporters. “I probably gave him the wrong play first of all. I could’ve given him something better than that.”

This year, most of the NFL went hyper-aggressive in critical situations, going for short conversions on fourth down and pushing for six points as opposed to settling for field goals. The Chiefs fell short in the latter scenario with a comfortable lead Sunday.

The Chiefs didn’t leave themselves enough time in a moment with their foot on the gas. Reid accepted fault, but Mahomes should’ve also had a better gauge of the time left on the clock.

On one hand, Stafford played 13 seasons, including 12 with the Detroit Lions, before his shot at a Lombardi Trophy. Prior to the 2021 campaign, he lost all three of his playoff appearances.

In just his second season, Burrow won three consecutive postseason outings, coming off a shortened 2020 that saw him miss the final six games because of a torn ACL and MCL.

Like Stafford in 2011, Burrow could win Comeback Player of the Year after throwing for 4,611 yards, 34 touchdowns and 14 interceptions while completing a league-leading 70.4 percent of his pass attempts.

In different stages of their respective careers, Stafford and Burrow will both have their first Super Bowl experiences. The former hopes to travel a long arduous road to a title, while the latter attempts to boost his growing resume and lead Cincinnati to its first Super Bowl victory in franchise history.