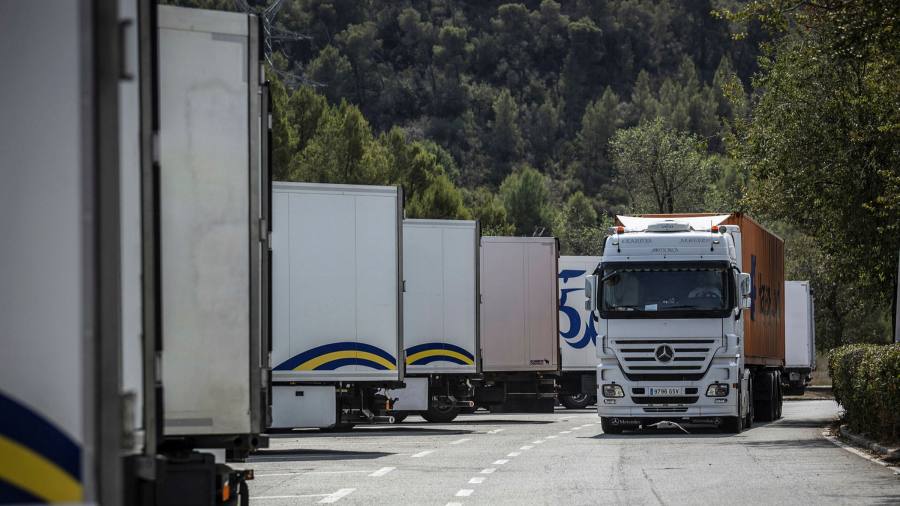 This article is an on-site version of our Trade Secrets newsletter. Sign up here to get the newsletter sent straight to your inbox every Monday

Well, we were told that enforcement rather than trade deals was the thing, certainly as far as the EU and the US were concerned. And as promised, the EU last week started a WTO case (joined by the US) against China for its bullying of Lithuania, and another against Egypt.

The China case will be tricky for two reasons. One, it means trying to prove government influence over the actions of supposedly independent Chinese companies. Two, as the case wends its stately way through the WTO system, China can at any point render it irrelevant by quietly lifting the pressure from Lithuania but applying it to another EU member state if it feels like it.

Slovenian companies are already reporting a backlash from China just days after Slovenia’s government expressed support for Taiwan. It’s a game of whack-a-mole with a squidgy and unwieldy mallet and some irritatingly agile moles.

The forthcoming unilateral (sorry, “autonomous”) anti-coercion instrument will be a heavier and quicker weapon, but will the EU have the guts to use it? Today’s main piece looks at how trade finance is adapting to the new world of supply chains under pressure from ethical scrutiny and Covid-19. Charted waters this week assesses how Germany’s exposure to global supply chains has undermined its economic recovery from the pandemic.

I want to hear from you. Send any thoughts to me at alan.beattie@ft.com

The tracks of my tiers

We spend a lot of time, possibly too much, monitoring the grand architects of the global trading system. Today, we’re going to lift the floorboards and check the plumbing in the form of trade finance, which eases business by extending credit to cover cross-border transactions.

A quick look suggests that the conduits of trade finance, while not bunged up, could be doing better. True, there’s nothing like the serious disruptions during the global financial crisis of 2008-09, when the supply of even basic instruments such as letters of credit dried up as banks cut exposures. The Asian Development Bank, which developed a measure of the gap between demand and supply of trade finance after the crisis, reckons it was equivalent to 9.7 per cent of global trade in 2020, rising quite sharply from 2018 but only slightly higher than its level in 2016.

Covid has created general uncertainty and longer wait times for shipments, putting more pressure on the system. Vinay Mendonca, interim global co-head of trade and receivables finance at HSBC, says supply chain disruptions have contributed to longer payment-terms periods, lengthening them by about five to eight days. He says: “We also see large multinational companies over-ordering and building up buffers, and therein comes the need for them and their suppliers and in turn their suppliers’ suppliers to finance these additional inventory levels.”

As well as letters of credit, which are secured on the credit strength of the buyer, Mendonca says there has also been a surge in demand for purchase order financing, which lends against the performance of the supplier before shipment, and asset-based lending, which extends credit against raw materials and goods and so helps finance higher inventories.

This pressure has focused attention on the longer-term issue: why is there a gap at all? Why don’t lending rates clear the market? The short answer is that the rationing of credit reflects imperfect information about creditworthiness. It is small and medium-sized enterprises, typically lower-tier suppliers to the multinationals, especially those in emerging markets, which disproportionately suffer from the trade finance gap because lenders can’t get good enough information about them and their performance.

Enter a possible solution — multi-tier (also known as deep-tier) supply chain finance — in which institutions lend right down through the supply network by in effect extending the creditworthiness of the big buyer to the smaller suppliers. Reducing informational gaps sounds like a case for fintech, which of course has pricked the interest of the blockchain crowd, and a lot of products are being created. The idea is that multiple tiers of suppliers can all operate on the same platform with revenues being tokenised and creditworthiness cascading through the system.

Multi-tier finance got a boost a few years ago when environmental, social and governance (ESG) investing increased the need for MNCs to have a clearer sight and control of their supply chain. Clothing brands want to know not just where their garments were stitched but where the cotton was grown. (Good luck with that one.) The supply chain crunch has added another business case: end-buyer companies have become acutely aware that single points of failure might be buried in small suppliers deep in their sourcing network, and want to protect them from financial distress.

Sounds great, but this relies on a lot of tech to manage information exchange. Trade finance has traditionally been a notoriously opaque and technologically backward area, and a lot of documents for goods trade aren’t even digitised. (It’s not like they haven’t had time to modernise: rudimentary letters of credit date back to Babylonia in 3,000BC, when they were written on clay tablets.) Alisa DiCaprio, chief economist at the enterprise technology and services firm R3, says: “Blockchain moves quickest where things are fully digital. Where you see it facing hurdles is where you have to have an interface with the physical supply chain.”

DiCaprio, who helped develop the ADB’s trade finance gap measurement, points out that there are no accepted global standards for new supply chain finance products. The International Chamber of Commerce has created uniform rules for digitised trade transactions, but they have only just come out and are yet to be widely adopted. “Until the rules exist, it’s going to be pretty difficult to scale,” DiCaprio says. The consultancy McKinsey, never slow to come up with cunning wheezes, has created a plan for what it thinks the trade finance sector ought to look like, but also notes that it would mean reforming a fragmented industry with a substantial amount of inertia.

Traditionally, trade finance also hasn’t been a sexy or lucrative enough area to generate a lot of innovation and investment. If the supply chain crunch provides enough incentive to invest — as it seems to be doing in seaport capacity, for example — then the global trade finance system might improve. But there are some deep-rooted habits to eradicate there.

Germany’s success as a manufacturing exporter has become a problem as its greater exposure to global supply chain bottlenecks has undermined its recovery from the Covid economic slump. Germany is also likely to be particularly hard hit by the slowdown in China, its second-largest export market after the US.

Germany’s economy shrank 0.7 per cent in the final three months of last year, according to figures released on Friday, underperforming most other big European countries.

While most economists agree that supply chain challenges are a key factor in Germany’s recent weakness, there is less consensus on how long it will take the country to recover. Until the long supply snarl-ups are resolved, German manufacturers will remain short of many materials from semiconductors to lithium, preventing them from fulfilling record order books.

Management consultants specialising in supply chains don’t get much sleep these days.

A massive surge of investment in semiconductors risks a chips glut in a year or two.

Despite its pro-democracy mandate, a significant portion of the EBRD’s annual €10bn lending goes to countries with authoritarian leaders, the FT reports.

Europe Express — Your essential guide to what matters in Europe today. Sign up here

Scoreboard — Key news and analysis behind the business decisions in sport. Sign up here