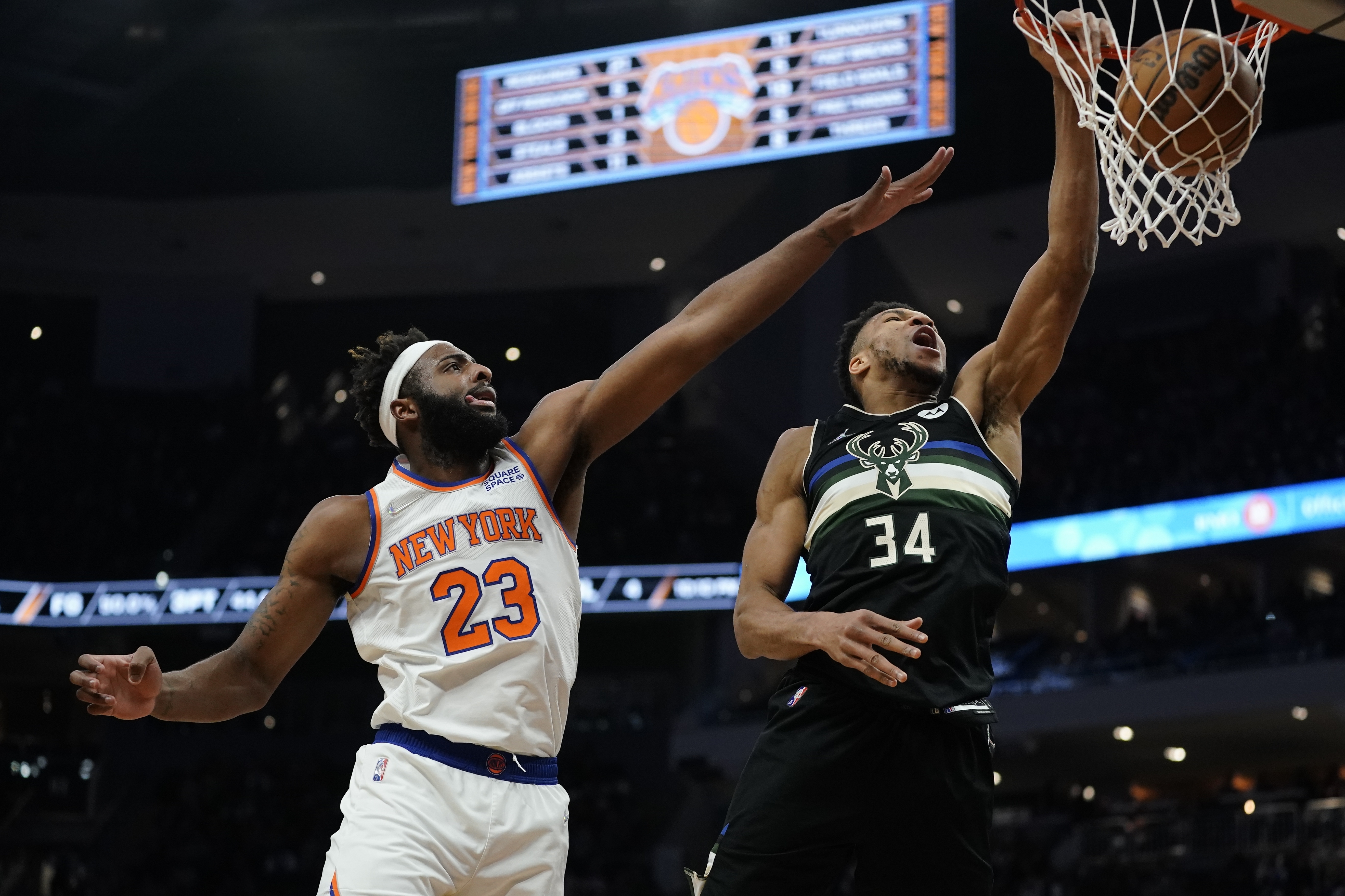 Evan Fournier led the Knicks scoring attack with 25 points on 10-of-19 shooting. RJ Barrett scored 23 points but made only 6-of-20 field goals. Julius Randle had 11 rebounds but scored just nine points and committed four turnovers.

New York hung tough through the first three quarters and only trailed 93-91 after an Alec Burks three-pointer early in the fourth quarter. However, Antetokounmpo scored seven points and dished an assist amid a 15-3 run to create some distance. Milwaukee never led by fewer than eight points for the remainder of the game.

The 31-20 Bucks have won four of their last five. The 23-27 Knicks have lost three straight and six of seven.

Milwaukee’s three-game winning streak came to a crashing halt on Wednesday as the Cleveland Cavaliers crushed the reigning champions 115-99. It was a wake-up call for the Bucks, who were outscored 69-42 over the second and third quarters.

After that ugly loss, it behooved the Bucks to respond positively on Friday against the reeling, 12th-place Knicks.

While their defensive effort sometimes left a lot to be desired, the Giannis- and Holiday-led offense paved the way for a resounding victory.

Antetokounmpo dominated the entire game, dropping 13 of the Bucks’ 39 first-quarter points to give Milwaukee a nine-point edge after one.

Holiday followed suit with 14 first-half points and five dimes after scoring just four against the Cavs two nights earlier. He hit a big corner three early in the second quarter:

The opening minutes of the second quarter also saw Antetokounmpo get hit in the face by Knicks big man Nerlens Noel, who was assessed a flagrant foul.

Nerlens Noel with the hard foul on Giannis 😳 <a href=”https://t.co/YHvafUqwIb”>pic.twitter.com/YHvafUqwIb</a>

Antetokounmpo stayed in the game, however, and he made sure that everyone knew he was just fine with this powerful slam:

Giannis had 17 points at halftime and added nine more in the third. He galloped through the key for this slam dunk in that frame:

Something light. 🤷‍♂️ <a href=”https://t.co/GYvuyGAmZc”>pic.twitter.com/GYvuyGAmZc</a>

Jrue so smooth with it. 🤌 <a href=”https://t.co/ccqI0HAclm”>pic.twitter.com/ccqI0HAclm</a>

Despite their efforts, the Bucks led by just two points early in the fourth quarter.

That’s when Giannis led Milwaukee on a run that effectively put the game away. A quick seven points, capped by this three-pointer, put Milwaukee up 102-93:

When he wasn’t dropping buckets, he was doing literally everything else, including somehow finding Grayson Allen with this incredible pass for a three that put the Bucks up 105-94:

The Knicks cut the lead to eight points with under four minutes left in the fourth quarter, but Antetokounmpo put the game away from the free-throw line down the stretch.

In the end, the Bucks put the Cleveland loss in the rearview mirror and came out hot against the Knicks to put themselves back in the win column.

The Knicks entered Friday in the midst of an ugly 1-5 stretch that included three home losses, including one to the 18-30 New Orleans Pelicans.

New York averaged just 97.8 points per game over its last six contests, a stretch symbolic of the team’s season-long offensive woes (No. 23 in offensive rating).

The Knicks fared far better offensively against the Bucks through three quarters, scoring 88 points and hanging tough with the defending NBA champions despite Antetokounmpo having yet another stellar game.

The problem was the Knicks couldn’t hang with the superior Milwaukee side for four quarters, as everything fell apart in the final frame.

At this point, the Knicks will have to take some moral victories if they can’t consistently manage real ones, and there were some to point to on this evening.

Barrett continued his scoring splurge, albeit on an off-shooting night. He entered Friday averaging 23.3 points per game in his last nine contests and appears to have taken a significant leap in his offensive development.

He hit a big three-pointer near the end of the first half to keep the Knicks within striking distance:

Fournier appeared to bust out of an ugly slump that saw him score just 8.5 points per game on 33.3 percent shooting in his last four contests. He scored eight points in the first quarter thanks in part to two threes:

Fournier even got this circus shot to go in the third quarter:

Some of the Knicks’ younger players also put in work. Quentin Grimes stayed hot from three (3-of-7) and scored 11 first-half points.

And Obi Toppin continues to be a human-highlight reel:

But their collective efforts weren’t enough as the Knicks failed to keep pace with the Bucks.

Friday certainly proved to be a tall order on the road against an NBA title contender, and the Knicks fared well for most of the game. But this matchup also showed how far this team has to go to compete on a consistent basis with the league’s best.

The Knicks will host the Sacramento Kings on Monday at 7:30 p.m. ET in Madison Square Garden. Milwaukee will welcome the Denver Nuggets into town on Sunday at 7 p.m.

Microsoft to gobble up Activision in $69 billion metaverse bet