The Federal Reserve has for the first time launched a period of debate and public comment on the introduction of a central bank digital currency, as it seeks to keep pace with global financial innovation and maintain the supremacy of the dollar.

After months of anticipation, the Fed on Thursday released a lengthy discussion paper that will serve as the basis of what is expected to be a heated and consequential debate at the heart of the central bank in the coming months — though it made clear it did not “favour any policy outcome” at this point.

“We look forward to engaging with the public, elected representatives, and a broad range of stakeholders as we examine the positives and negatives of a central bank digital currency [CBDC] in the United States,” Jay Powell, Fed chair, said in a statement.

The Fed had been hesitant to embrace a central bank digital currency in recent years, saying it would only do so if the benefits outweighed the costs. It has lagged authorities in China, which is piloting a digital renminbi. The European Central Bank has also made inroads with the technology.

Powell has previously said any CBDC should serve “as a complement to, and not a replacement of, cash and current private-sector digital forms of the dollar, such as deposits at commercial banks”.

“The Fed is finally wading into a topic that is unavoidable for central banks as they contemplate how to secure monetary and financial stability amid various innovations in financial technologies, including an accelerating shift to digital forms of payment, that are reshaping financial markets and institutions,” said Eswar Prasad, a professor at Cornell University with expertise on digital currencies.

The Fed is asking for public comments on a potential CBDC over the next 120 days, and no decisions have yet been made about how it will be structured or if it will be rolled out. 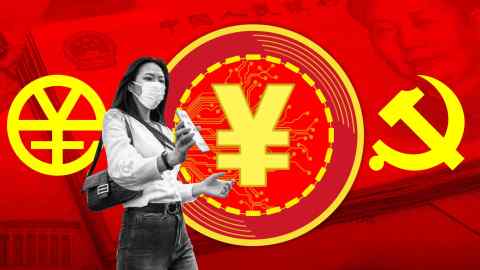 “While a CBDC could provide a safe, digital payment option for households and businesses as the payments system continues to evolve, and may result in faster payment options between countries, there may also be downsides,” the Fed said.

“They include how to ensure a CBDC would preserve monetary and financial stability as well as complement existing means of payment. Other key policy considerations include how to preserve the privacy of citizens and maintain the ability to combat illicit finance,” it added.

The Fed said it would not proceed without “clear support from the executive branch and from Congress, ideally in the form of a specific authorising law”.

“The Federal Reserve’s report is a good first step toward designing a central bank digital currency that will bring more Americans into our banking system and help maintain the United States’ leadership in the global economy,” said Sherrod Brown, chair of the Senate banking committee.

Pat Toomey, the Republican senator from Pennsylvania, applauded the central bank for “constructively” contributing to the ongoing debate and indicated his support for the Fed to look into such technologies. But he also voiced concerns about privacy issues, suggesting a possible sticking point in rolling out a CBDC.

Jan Hatzius, chief economist at Goldman Sachs, told the Financial Times during a panel hosted earlier on Thursday by the Chicago Council on Global Affairs that the Fed was unlikely to be “very aggressive” in its plans to proceed if it chooses to do so.

“There is room for introducing that cautiously, but you’re not going to anytime soon, I think, replace the core bank-centred system of financial intermediation,” he said.

The Fed appeared attuned to the risks and acknowledged that a CBDC could “fundamentally change the structure of the US financial system”. It flagged the potential for bank funding expenses to increase should bank deposits fall as an interest-bearing digital dollar became more widely available. This is turn could raise the cost of credit for households and businesses.

However, it noted certain design parameters that could help avoid this outcome, including capping the amount of CBDCs someone could hold.

The Fed also said it would “best serve the needs” of the US to have the private sector offer accounts or digital wallets to “facilitate the management” of all related holdings and payments. They suggested commercial banks and regulated non-bank financial services institutions could lead that charge.

For the latest news and views on fintech from the FT’s network of correspondents around the world, sign up to our weekly newsletter #fintechFT

Inaction also has consequences, the Fed said. Failure to develop a digital US currency might erode the country’s supremacy in global markets, the discussion paper warned.

“It is important . . . to consider the implications of a potential future state in which many foreign countries and currency unions may have introduced CBDCs,” the Fed said. “Some have suggested that, if these new CBDCs were more attractive than existing forms of the US dollar, global use of the dollar could decrease — and a US CBDC might help preserve the international role of the dollar,” it added.

Why Mixnets Are Needed To Make Bitcoin Private